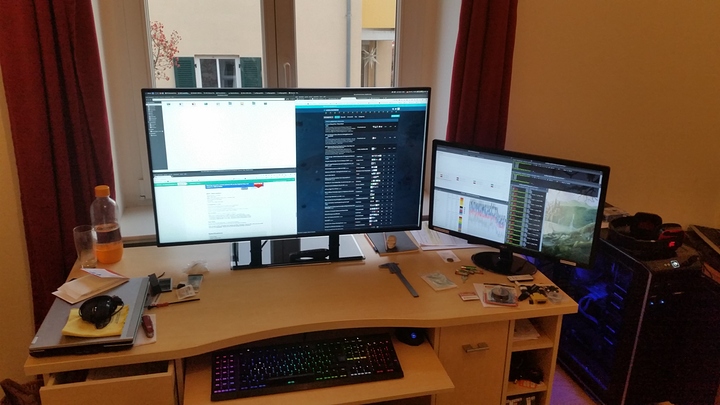 As said, i have no idea. I just know i want something to move the
monitor up/down and mainly tilt the way i want it. I have the table in front of an window.
So a wall mount is not an option.
But i also want to be able to move the Monitor back into the window whole, so that i have free desk space when i work there.

So far i found this while googleing.

I have two of those with 24" displays, I would not put anything bigger on them.

Hmm ok,
do you know of any alternatives?
Is it even possible to get a monitor arm for a 40"?
Drilling a hole into the desk wouldn't be a problem

I know that @wendell uses pretty heavy duty stuff and I think he might have some 40" on arms, but I don't remember the brand.

Thanks. That info was helpful. Found this old video
He uses spaceco monitor arms.
Lets see what there have. I just need a little less crazyness.

Edit:
And its over 600 USD in the configurator. Way to expensive. Sh...ame

I would suggest the Ergotech Freedom Arm HD (FDM-HD-S01). Its made to take a good amount of weight. Depending on the mounting of the VESA holes on the back you can figure out how much reach it will have.

That one looks like a fancied up version of the ergotron I have. I bet it is mechanically the same thing.
Trust me, you do not want a 40" monitor on this one. 24" is fine, 27 is fine, 32 has to be on the lighter side, anything bigger is a nope.

Im not sure what model you have but this one is made to hold up certain iMac models which is why it has a higher weight capacity. The Ergotech Freedom Arm HD was able to hold up a Sony XBR43X830C, a 43in 4K TV mounted to a desk. That TV also had 200x200 VESA mount which I adapted to the 100x100.

Mine is the Ergotron LX which theoretically can hold up to 11.3Kg. I had a Samsung 34" curved ultrawide mounted to it for a while and yes, it will hold that. But I would not recommend that.

And by the way, the mentioned 40" display seems to be quite a bit heavier than your tv.

That rings a bell, I think that is the stuff Wendell uses.

it is. As mentioned above. I think thats the only real solid solution for big monitors.
At least i think so after 5+h of googeling.
For small monitors there many alternatives. But i don't want to push the limits of that monitor arms.

If you really want to stay low cost, use a wall-mount arm like this. They hold a hell of a lot of weight for a negligible price. The only prerequisite is facing a wall :P