I’ve had a VEGA64 LE since launch, worked fine for years, but got retired when I got a 5700XT not long after launch. I was planning a showcase liquid-cooled PC build with a heavily modded and painted Antec Lanboy Air case and my former 1800X CPU all in a purple, gold, silver, and black royalty theme that has been abandoned with the last part needed being a custom distro-plate that I drafted in Tinkercad. After upgrading to the 5700XT, I put the VEGA64 in a Heatkiller full-cover waterblock, and left it in my PC parts dresser drawer as I collected the rest of what I needed for the build.

Since abandoning the build though after sinking a shameful amount of minimum wage money into it, I was itching to use it in a spare-parts custom PC for a friend to sell on the cheap. Somewhere along the way I lost the VEGA64 cross brace, but I did find a way to reattach the original heatsink without it. Problems continue as I try to boot the system and the MB spits out random POST errors. Tried my spare 560ti-448 on a whim and it POSTS perfectly fine, so it’s clearly the VEGA64 that’s preventing the POST. Out of all my boot attempts (maybe two dozen), two got past POST. One was about to display an output, but I saw corruption lines flicker then loss of input on the display. The other actually got to the BIOS/UEFI screen but had corruption lines patterned across the display. I do not have, and regret not taking photos of this situation. On disassembly inspection of the PC, I cannot find any visible damage. I do have a full-coverage mount of the original heatsink. I do not have a multimeter. I’m willing to sell it as I’m certain it’s functional with some unknown degree of PCB repair, but if I can fix it in-hand first then I’ld like to try. If needed I can get photos of the clean PCB front and back, but don’t have them yet.

Did you use screws with metal washers?

Plastic washers for the GPU block.

Its (unlikely) but possible that you have a dry solder fracture somewhere. Try baking the card in the oven to re-flow the solder and repair the break if it has one. If it doesnt, this will not harm the card, just strip it to a bare PCB first so there is no plastic that could melt.

Put the card on a baking tray on small balls of tin foil at the corners to lift it and allow air circulation. Preheat your oven to 170C and bake for 30 mins. If this doesnt fix it you can try 30 mins at 190C but DO NOT EXCEED THIS TEMPERATURE.

I’ll link a guide but I am not responsible if this ruins your card - try at your own risk. 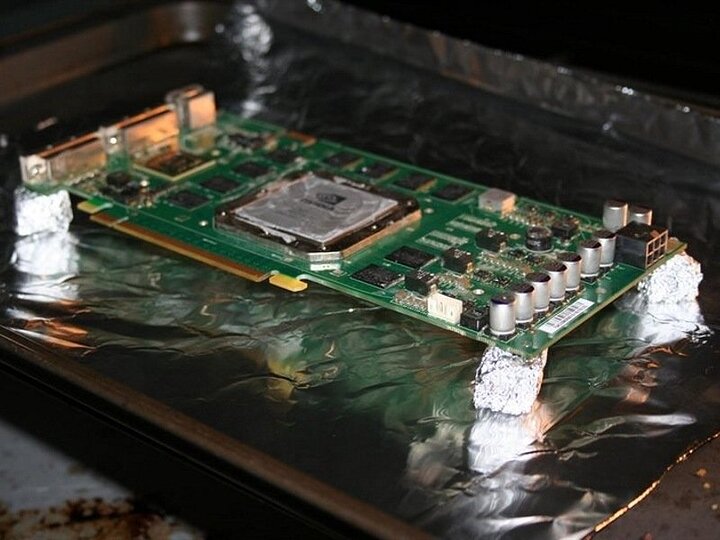 A graphics card circuit board can have bad solder joints under the GPU die. This can be temporarily fixed by heating the board in an oven.

Its (unlikely) but possible that you have a dry solder fracture somewhere. Try baking the card in the oven to re-flow the solder and repair the break if it has one. If it doesnt, this will not harm the card, just strip it to a bare PCB first so there is no plastic that could melt.

One: you release toxic gas into your oven
Two: it will just cook your card

If you are going to reflow solder joints, you should be using a reflow station, not an oven.

A reflow station is well outside my self-quarantined budget, but I’ll try hitting it with my heatgun while watching it on a FLIR in a well ventilated area.