Hello everyone! I was hunting around for something that could help me monitor the voltage and the amperage out of a USB charger and allow me to negotiate in order to protect my phone and having it last as much as possible (glued IP68 glass back, a pain to take out and swap battery). I found THIS device which is amazing but I wouldn’t want something so complex and so costly (I can’t justify spending 60$ on something like that). Does anyone of you know of a device like the one I mentioned?

Why leave your phone on the charger all the time? My HTC U11 is getting very old and the battery is still awesome, two reasons why. #1 NEVER OVERNIGHT CHARGE, EVER #2 Discontinue charge at 85% as often as possible

With quick charge / usb pd It takes like 20 minutes to go from 20% to 85%, and that lasts a day, sometimes longer. If you need to charge more often than that your battery is already toast.

OTOH Why is $60 too expensive to protect a phone that cost ten times as much, if not more?

I’ve seen a bunch of people who tinker with electronics play around with devices similar to what you are interested in. Some of them can even work with USB-PD for different voltages and keep track of volts and amps. A quick search I did on one guy’s channel yielded a handful of useful results: 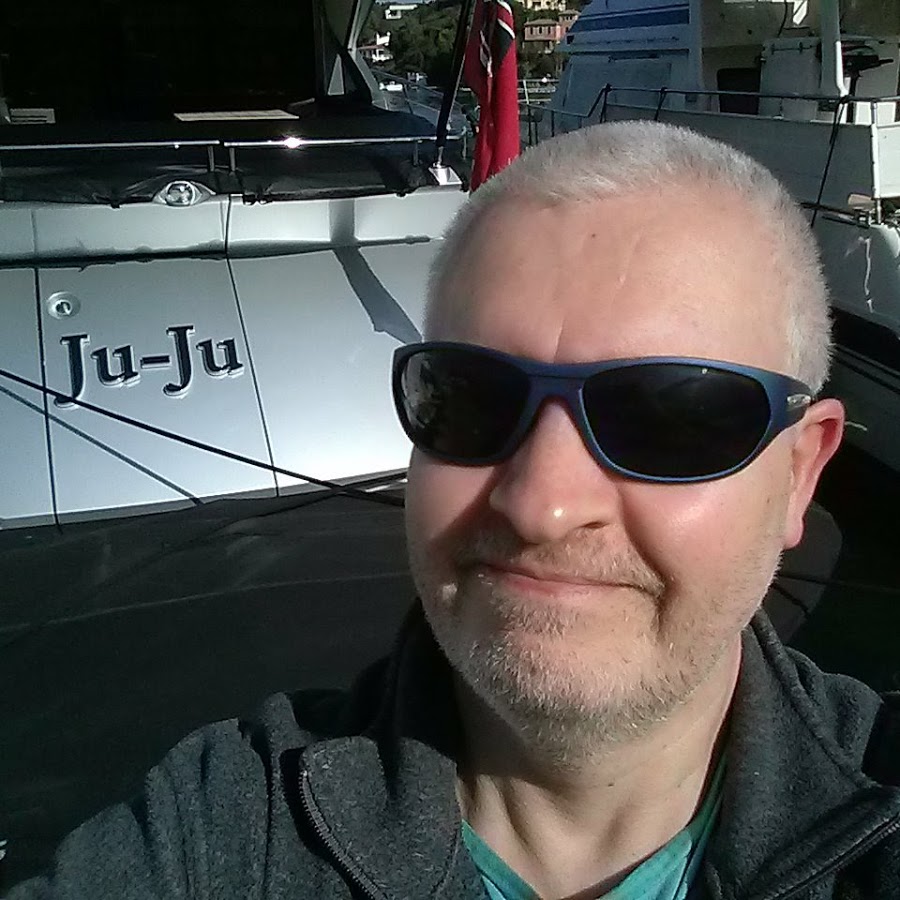 Electronics on the cheap - electricity for free. I buy cheap electronics modules and components direct from Chinese sellers via eBay. Most of this stuff work...

@gordonthree Why did you assume a bunch of things about how I use my phone? I did charge my phone overnight for some time when I got it but quickly stopped, I keep it between 20 and 80% as much as possible (life before anything else, duh) and I very rarely quick charged it. 60$ is too much for me and my phone costed 250$ at the time. I appreaciate you trying to answer me but your answer adds no value to the conversation.

@KleerKut I tried to Google “USB power regulator” but I only found bare PCB devices that just up or lower voltages from 5V and can’t interact with USB charging protocols in any way. Thanks for pointing me in the right direction!

This is a waste of time and effort tbh

There are cheaper versions of the device youre looking for but they wont help you do anything with the information. What will help is a slick little app I use called battery charge limit. The caveat here is that you cant use it without root and it doesnt always work on all phones.

Otherwise just get accubattery and set a charge limit alarm to 85%.

Yeah, I think sometimes being one word off, particularly with electronics, can lead you down the wrong path. I remembered seeing some of the power monitors when I was looking up other stuff related to power supplies, as I’m looking to buy a few DC-DC buck converters to use with solar.

If you end up getting one, let us know how it works! I’ll need one eventually to monitor my power usage. Kind of like a Kill-A-Watt for 5V USB is what I’m after.

I dont know which one bigclive uses but I’d imagine its probably a decent cheap one to get.

Theres also this thing I found with just a quick google 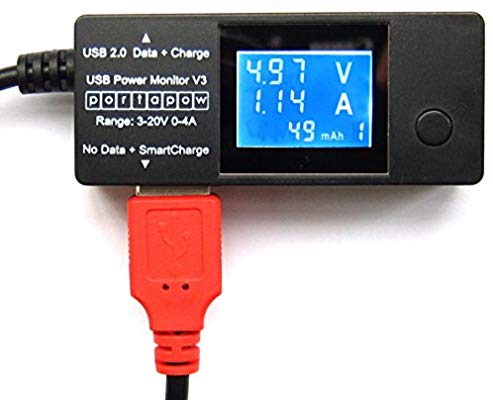 Arduino, a hall effect current sensor and a few lines of code… maybe $10 in parts. Adding a screen would be the biggest expense.

Could use an ESP8266, potentially less expensive than Arduino

For USB multimeters:
Adafruit has this thing: 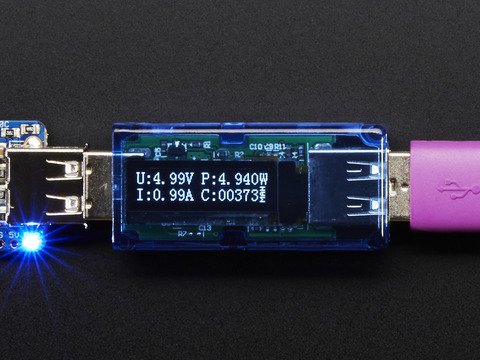 This USB In-Line Voltage and Current Meter with OLED Display is a lot like the Charger Doctor we carry - if the doctor was a talented surgeon who just lost her medical license ...

I have the Joy-It AT34 which like the adafruit one but up to 30V.

Get a cheap bench PSU and a USB-A header, then just set 5V and 1A and you are golden.
Units like [this one](https://www.newegg.com/p/30N-00K2-00001?Description=bench supply&cm_re=bench_supply--9SIAJZT8X58941--Product) cost nearly nothing, better ones may allow you to programm voltage and current or log (and not have a cooaling fan).

@Adubs Well my idea was to have just the quickcharger that I got with my phone but being able to negotiate manually the charging speed instead of letting it go full power and destroy the battery. To monitor the health of the charge that gets to the phone I use Ampere, which sends a notification when the phone hits 80%. Yeah, it might be a waste of time but I can’t stop pursuing what makes me courious asperger at it’s finest

@KleerKut In the end I think I’ll pick up at least a monitor since I can’t truly monitor what comes out of a charger but only what gets to the phone. I’ll surely update the thread once I buy something. Or I’ll DM you, whatever works best for you.

@gordonthree What I was really looking for is something that is able to interact with the charger and override the negotiated charge speed instead of letting the phone do it.

@MazeFrame That multimiter looks sweet, thanks for the suggestion! Regarding the bench PSU well…it costs just as much as the weird Power-Z device I linked in the OP, I can’t carry it around and it’s not available in my country soo a bust unfortunately in every way.

In terms of what reduces the life of your phone’s battery, charging to 100% is much more damaging. High current isn’t that much of an issue unless the battery is getting too hot. Just get a smaller charger if all you want to do is spend more time charging.

x2 for a smaller charger being the simplest solution.

maybe combine with one of those wind-up countdown switches, like they use for sauna and hot tubs. Dial a charge for X hours set and forget?

@MazeFrame @Adubs @KleerKut
Update: I’ve found THIS device online and that’s what I needed for my use. Cheap and allows me to select the voltage I want to charge my device. I checked on the original charger and basically Qualcomm Quickcharge and USB PD overlap in operating voltage so that’s pretty cool. Now I’ll be able to select what kind of voltage I want my phone to charge at.

It’s also a really cool piece of tech and someone might find it interesting so that’s why I’m updating the thread.

Not to be to negative here, but generally the charger and phone agree on how much to charge. You are worried about longevity of the device and cost, but you go ahead and trust a $4 chip that doesn’t have a proper description from ebay to supply a proper and correct voltage to your phone?
Also, if this thing makes an error when negotiating with the Powersupply, the added Power needs to go somewhere. And i’d personally suspect it going into smoke…

Also, from what i understand in their writing, it’s basically “just” a limiter. You either set a maximum of 15V or 20V and that’s it. I don’t think it’s adjustable.
Also, what are you getting? There are pictures of 4 different devices…

I’ll test it before using it obviously. And there’s not a chance that things could wrong just for the fact that if the device selects the wrong voltage I’ll just get 12V from the power bank or the chager, which is supported by the phone. It’s not like I’m using a circuit to increase voltage that could go ham and pump 100V into the phone. If you know more about the matter I’ll be happy to know!

P.S. there’s a button on it and it allows to cycle through 5, 9, 12V. Supports a maximum input voltage of 20V but depends on the source you plug in. The one I’m getting is the one with the USB and USB C female connector.

P.P.S. it’s also “smart” in a sense and it’s described in the item description how it’s able to negotiate on it’s own based on what kind of cut off you set and what the device supports.

If you know more about the matter I’ll be happy to know!

I don’t really. All i know is that both the phone and the charger talk to each other to agree on a Voltage. Having a device in the middle that needs to do this for both sides correctly, that costs 5 bucks would be worrying me more than the potential long-term effect of Charging at higher speeds.
As others said, i’d just get a cheaper, lower voltage Powersupply. But i also tend to get a new phone every 2-3 years, so i’ve never had a Problem with Battery longevity.

I don’t swap phones that often because, for my needs, I can just get by with what I buy for 4 years at least. Also, as said in a previous post, I just like tinkering with stuff so if I damage anything I’ll eat it up and learn from it. I’m just breaking a phone, not a bone so it’s fine for the knowledge I get from it.

The voltage isn’t a problem, the heat from lots of power is. I don’t get what your goal is. Just get a lower wattage charger if you want to charge more slowly. All you’re doing is making the charge circuit in the phone completely pointless because you’re adding another one between it and the charger. Heat kills batteries so slow the charge rate down with a lower power charger.

making the charge circuit in the phone completely pointless

Exactly. I don’t like my phone chosing for me what’s the maximum charging speed.

The voltage isn’t a problem, the heat from lots of power is.

Power = voltage x current and it’s the same for every voltage step QC 2.0 (specs I aim for) allows. The point is that more voltage causes more heat and degrades the battery much faster.

Good luck. I hope your part does what you want.