Hello, I received this computer as a gift, and I put some 550ti I had lying around inside it. Now I have enough money (£300) to upgrade my computer, I wanted to buy a new motherboard and haswell processor, but do not want to overclock, so I should get a non "k" cpu, but does this also mean I would be wasting money on a z87 chipset motherboard? How would you upgrade this, thanks. 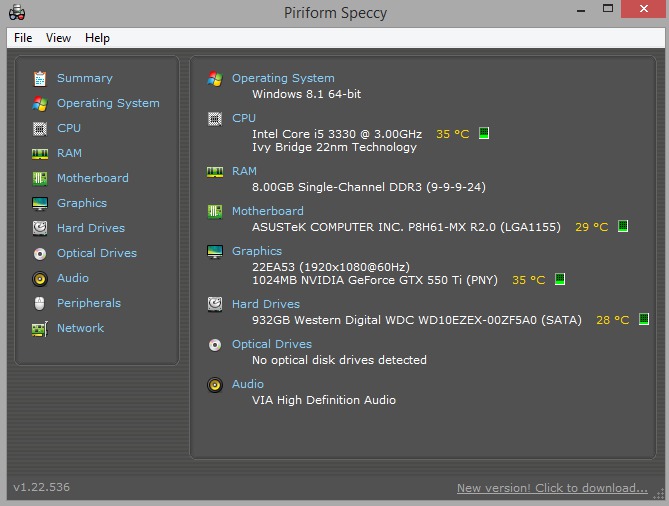 that cpu is plenty fast, and in my opinion, doesn't need to be upgraded. The most important thing for you to improve gaming performance, is tu upgrade the GPU. for 300£ you can get a very nice 120 GB SSD for fast boots, and a GTX 770, or if you can wait for R9 280X's to come back in stock, get one of those, since it performs the same or better, but has 3 GB frame buffer, wich will be more "future proof"

btw what wattage is your psu?

I agree that upgrading to Haswell is not the best upgrade route for you right now.  Ivy is still plenty good.

Pick up a better GPU, and SSD for your OS if you can afford one.

Emphasize on the GPU if you game/render a lot.

thanks, and the PSU is 600w so should be fine, also I will buy a fractal r4, and may get a cpu cooler for silence instead of the stock one even if I may not need it

Your MB seems like it might do with some upgrading. It only supports 1333 RAM, has PCIe 2.0, and is on an older chipset. Plus your memory is on a single channel. I would look into getting a Z77 MB, and dual channel 1600 MHz memory. Once you have those, see what you have left for a graphics card and maybe save some more to get a solid one. I would do those three things before SSD. Someone call me out if I'm wrong.

Hi, I just thought if I was going to spend some money I may aswell get intels latest range of processors. But then it would set me back £220 if I got an i5 4670 and a h87 motherboard. but then I would have no money for anything else. Gah!

Haswell has only about a 5% increase in performance if clock speeds are compared.  I would highly advise against it.

You don't need dual channel, especially if you already have 8GB of RAM, even if it's single channel.  It's not worth the money to upgrade.  It also costs at least $70 for a decent kit nowadays.

I stand corrected. After some fact checking (maybe I'll do that first next time), there isn't much difference between Z77 and PCIe 3.0 and H61 and PCIe 2.0 in most scenarios. I knew that modern cards aren't saturating PCIe 3.0's bandwidth, but I didn't realize they weren't utilizing much more than 2.0 provided. I read an article on HardOCP where a GTX 680 only gave 2-3 FPS difference between an H61 2.0 MB and a Z77 3.0 MB. As for the RAM, you raise a good point about the cost. I got my last kit before the shortage and I keep forgetting how much it costs right now.