I currently have Ubuntu 19.04 (Kernel V: 5.0.0-38-generic) as the Host and Windows 10 running as a Guest in a QEMU/KVM virtual machine with UEFI capability. It’s setup with GPU pass-through, Scream Audio, and Looking Glass. This has been running mostly flawlessly.

I bought the GPU’s back in 2015 for $290 (interesting coincidence) each and I’ve thought about upgrading them several times. I’m not a gamer but I do like contributing the extra power to BOINC or (if I can make it work on GNU/Linux) [email protected]

I’ve been told not all GPUs play friendly with pass-through so I’m asking what modern high-end desktop GPU’s have you had good stability with using QEMU/KVM and Looking Glass?

I’d like to stick with AMD GPU’s. It’s just a general preference. I’d also like to avoid having to implement the NVIDIA error code 43 workaround.

Budget wise I’m looking for something with more compute performance than the R9 290X but I’d like to keep the total cost <$1,000. Maybe $1,200 if there’s a compelling deal going on.

All suggestions are appreciated. I plan to watercool the cards as well so there needs to be a waterblock available on the market that fits.

your best bet is AMD’s VEGA platform. as (afaik) thats the only chip that does have Nvidia’s code 43 bug AND has a viable workaround for AMD’s reset bug.

@gnif is working on fixing Navi10’s resetting, but due to AMD’s lack of cooperation with him, there’s no telling how long it will take.

The VEGA’s that would be the 56/64’s yes? Did they make any more recently that I’ve missed? 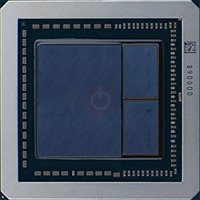 scroll down to “Graphics cards using the AMD Vega 10 GPU”
you want one of those cards.

Vega 64 availability isn’t looking good but Vega 56 appears plentiful and is still a considerable upgrade in every aspect. Waterblocks are also still available for it.

If there aren’t any other suggestions that’ll be my go-to.

Gotta remember that AMD also made that Radeon 7 if you wanted the fastest consumer VEGA. But availability is starting to disappear on both it and vega 64. I have had a good experience passing through my VEGA 64 (and RX 480) to VMs.