My current mobo is a Gigabyte x470 aorus ultra gaming which is getting on to be 4 years old so I don’t trust that it would last, say, for the 5800X3D (maybe 2 years?).

And what I use my PC for (beyond normal browsing):

Since my current MOBO and CPU are working just fine, I would also use this as an opportunity to start a homelab and delving into my own NAS, virtualization, smart home, etc. This is one reason I’m not going with a 5900x / 5800X3D and just using my old MOBO, to get the best bang for my buck in terms of a good upgrade to my primary PC and to get the homelab setup running.

I’d appreciate any second opinions on an upgrade path I may be missing, any other things I should be considering?

I’d only suggest that you can avoid K versions of CPUs since the OC overhead is basically no longer there and that F versions don’t seem worth giving up the iGPU for debugging purposes.
12700

that said MicroCenter has good deals if you’re near one 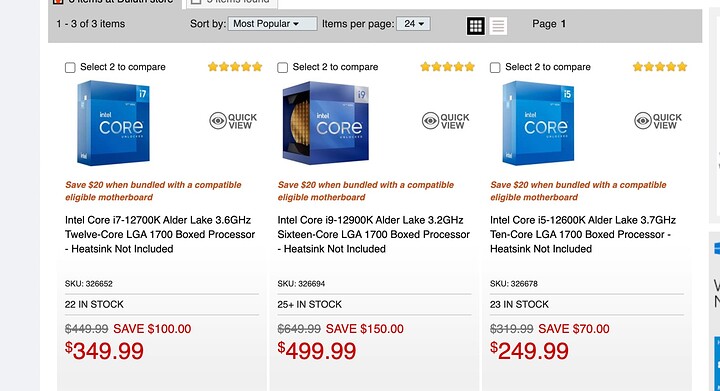 I am in Oregon, so sadly very far from any Microcenters I believe

Oof. Yeah, then you’re stuck with what you can get. But that seems like a good deal to me

haha maybe I should start a side hustle of acting as a middle man for MC? There’s two near me in GA

edit: non-F version is preferred, but you’ve already been running AMD without iGPU, so it’s not like you’re giving up a feature you were actively using?

Yeah I don’t see a use-case for the iGPU, though the debugging is nice to have.

Probably still worth saving that $20 on the 12700f non-k part from best buy though, since I’m getting a B660 mobo anyway.

I would suggest you go for something like 5800X. Because to be fair this is all you really need.
Upgrade the CPU, don’t buy new motherboard cause you don’t really need to and save your money.
Ryzen 5000 have made a nice jump in efficiency. 5800X is most likely gonna consume less power than your current 2700X.
All you really need to do is update BIOS, drop the new CPU in and be done with it.

One could even wait for AM5 to see what it offers before upgrading the main system, that’s where I’m at with my main system as its still on later AM4 hardware so no need to rush into Intel 1700 just yet.

I think the case could also be made for the 5900X with that motherboard. It all depends on where you want to go.

If you want a performance upgrade to last you another 18 months or so to then go for brand new Mobo+DDR5+CPU, the 5700G is probably your best bet. Those cost $300, you lose marginal performance compared to 5800X, but otherwise nothing lost.

If you need more cores, the 5900X also makes sense and offers 4 threads more than the 12700. While DDR4 on Alder Lake is a thing, from where you’re at I would probably rather just get the 5900X than skip to Alder Lake.

If you want to jump to Alder Lake and be mostly content for the next 3 years or so, yeah 12700+B660 sounds about right. If you are planning to upgrade sooner, then see above.

Just a note on the 5700G, those new APUs seem to run really cool, you could actually run it with the Stealth and have safe temps, though not as low as a better cooler obviously.