As the title says I am running in to an issue with my Live USB that I use. I used it last night and installed the OS on to my laptop. Install finished and said that the computer needed to reboot, so I selected to reboot the computer. After it powered down. I removed the USB and I rebooted the computer and the OS would not load, it sat at a black screen with a blinking cursor up in the top left corner.  So, I restarted the computer with the USB in and elected to boot from it again, however when i booted from the USB it loads the OS and the menu that I was getting that contained "install, try ubuntu, memtest, etc."

So I am at a loss, I am not sure what is going on here, I didnt install the full OS to the USB because for 1 its not big enough, 2 when booted in to the OS its reading my laptop hard drive.

**I also though that I should note, once I get the computer booted I can remove the USB and everything continue to work fine.. so I cant boot to the USB, but i cant boot to the hard drive without the usb

During the install, right after the GParted intermezzo, the installer has asked you if you wanted to install a bootloader. You've probably not checked the box there and proceeded...

Remedy (Ubuntu forum wizzards please check this, I'm walking on thin ice with Ubuntu!), copied from the askubuntu website, it's the first result I got when looking for a GUI GRUB install: 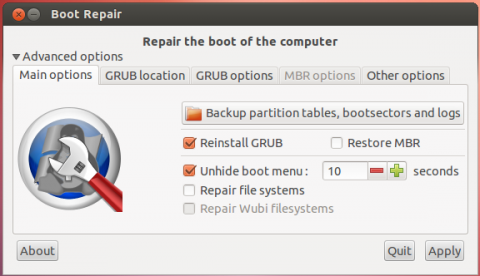 Computer is in another location than me at the moment. I will give this a try in the morning and then report back.

Just an update, this worked like a charm. Thank you very much. I am new to the whole Linux scene.