Trying to do a budget/effective home theater set up.

Due to budget constraints, and wide/use cases loactions within the house (bedroom, living room, and dining room), I have decided to do a TV cart fitted with a little AV cabinet, mounted with a Dell P4317Q monitor (which I already have on hand), and possibly A/V Receiver + bookshelf speaker combo. (I also happen to have KEF EGGs and AudioEngine A2+ speakers too)

Part of this arrangement is not to be wasteful and trying to be modular. This is also to accomodate a bunch of stuff (apple tv, chromcast, PS, Switch…) (“Inputs”). The TV cart will look something like this: https://img.alicdn.com/imgextra/i1/1625325549/O1CN01wBsUA61qrUMDx1Mem_!!1625325549.jpg The outcome I want to achieve is that all I need to do control video input with a remote and control audio with another while having the optionality of bluetooth.

Problem is that the Dell monitor doesn’t have an ARC. So I’ve run into some limitations, and come up with some combinations and require feedback. I appreciate the advice provided. Thank you in advance:

**Option 1:**Inputs > AV/Receiver > (HDMI) Dell + Passive bookshelf speaker connected with speaker wires (although I 'm not entirely sure how to attact those speakers onto the cart itself)

I don’t understand why you’d want to use ARC instead of using audio in th direction it’s meant to go in.

There’s these things called HDMI switches, they’re $10-$20 on Amazon, they come with a remote letting you change inputs in case you need 4 or 6 inputs like you normally get on a receiver, they generally don’t decode HDMI signal, your HDMI bandwidth would be limited by the chip but not specific formats.

There are also HDMI audio extractors for relatively cheap, if you want to reuse existing speakers - they mostly only do pcm stereo or ac3 - it’s up to your source to transcode.

Your typical sound bar will be a combination of switch, extractor with support for a bunch of audio codecs and formats, and a remote that can do cec (which your monitor probably doesn’t support, but let’s you pause on/off etc)

solution to replace it with a TV

A TV with optical out would make this a lot easier. One with analog out (for headphones for example) would allow you to use your existing speakers.

Since I have the the KEFs and A2+ speakers, I wonder if they can be looped into this setup. If so, how?

Like mentioned above, you need some form of analog.
And probably a cable like this (1/8 TRS to RCA): 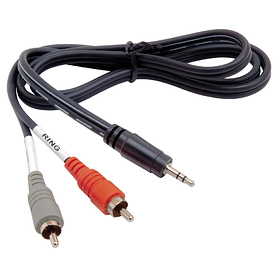 That would make this too easy

I don’t understand why you’d want to use ARC instead of using audio in th direction it’s meant to go in.

Option 2 is what you described. All Inputs connect into a switch. Video goes into the Dell monitor via HDMI. Audio goes into the Soundbar (probably Bose SoundBar 700 at this point because I don’t have to buy the mount separately) via another HDMI.

That would make this too easy

PRECISELY!!! Sadly they don’t sell in Asia yet, except through amazon…

AV-Reciever. Probably expensive but the mostly hassle free way to do this. Just run whatever HDMI you have in there and let that handle the Digital to Analog conversion.

In all likeliness at this point, I probably wil go with AV Receiver to Soundbar via optical. But I’m not aware of any AV receivers that do optical out to soundbar optical IN

Have one single remote to control everything too.

Most soundbars function as a receiver with speaker(s) built in, if buying a soundbar maybe splurge for a better one to avoid having an av receiver as well.

Audio goes into the Soundbar

I am not super experienced with speakers (only recently got myself a pair of Emotiva Airmotiv B1+'s), have some knowledge in headphones and PA gear though.

Look at Edifier A80 or Swan M80W.
A pair of Triangle LN01, KEF Q150’s or DALI Oberon 3 with a mid-range AV-Reciever will likely give you a better experience.

Yea… I’m undecided on this.

Plus, I will be pushing this around from room to room, need to figure out the mechanics of this… I’m looking at most receivers at the moment, seems like the only audio outlet is using speaker wires?

I’m looking at most receivers at the moment, seems like the only audio outlet is using speaker wires?

Some of them have so called “Pre-Amp” or “Pre-Out” connections. For powered (= active) speakers, you would use those.

I saw forum posts (on Audio Forums) and YouTube Videos where something like the miniDSP HD plus the optional remote was used. Not sure if that would work for you.

Something to consider here:
When you get an AV-Reciever anyway, you have a speaker amp. So instead of running more electronics behind it, I would get passive speakers (like the Triangle LN01’s, KEF Q150’s, etc. I mentioned.

For stereo speakers, ideally, in an equilateral triangle with your head:
(Not my drawing) 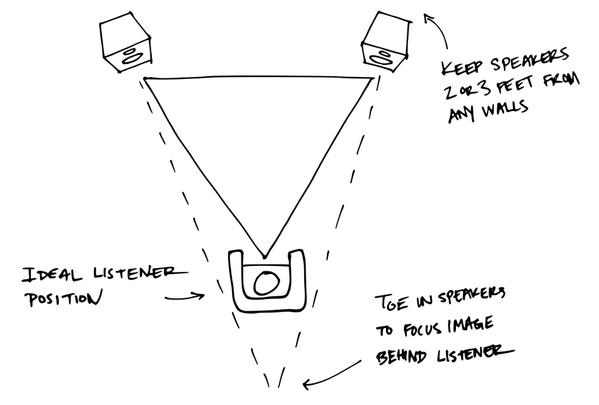 Hight-wise, you want them to be ear-level or angeld up or down at you.

Thanks!
I referring to where on the TV cart I would put the speakers LOL