Todays reason that your shipping is delayed. Suez Canal blocked 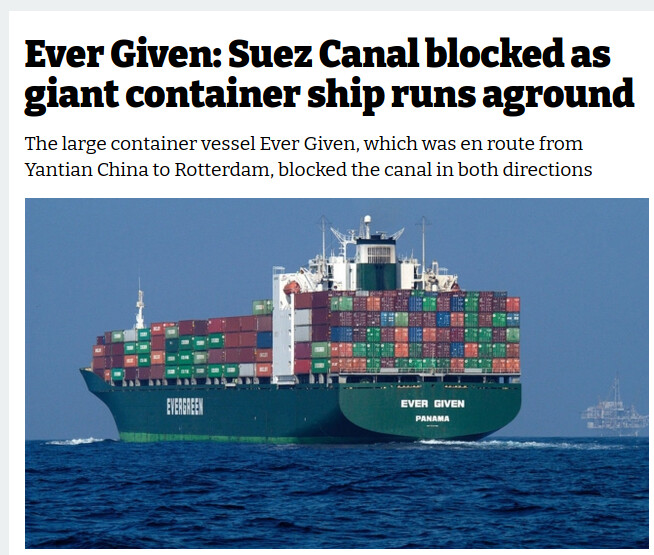 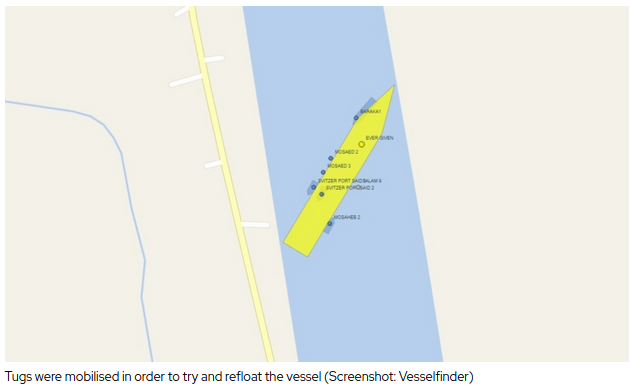 Ship has run aground. This little incident will be delaying a significant chunk of world trade I imagine.

I heard this through less detailed word of mouth and it made it sound worse than it looks like it was 90° somehow, but that looks like a relatively easy fix. A couple of tugs at either end to push and rotate it back straight, I say as some one with zero experience of real world shipping, just what I saw they could do on TV.

Edit: ah I see it has actually dug in. Finally an article with actual pictures… News reporting has gotten pretty lazy judging by the number of same words no pictures “reports” out there. 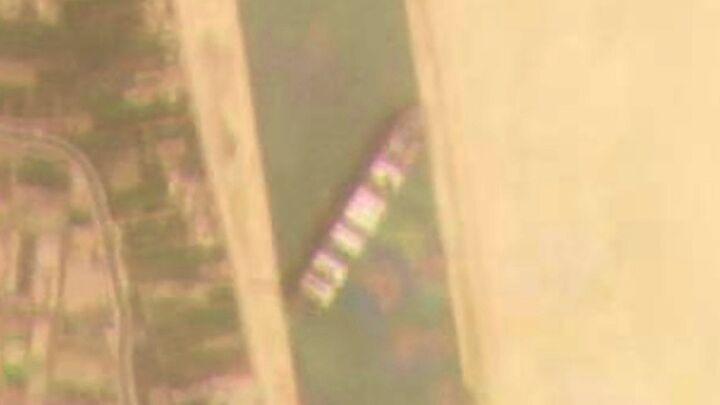 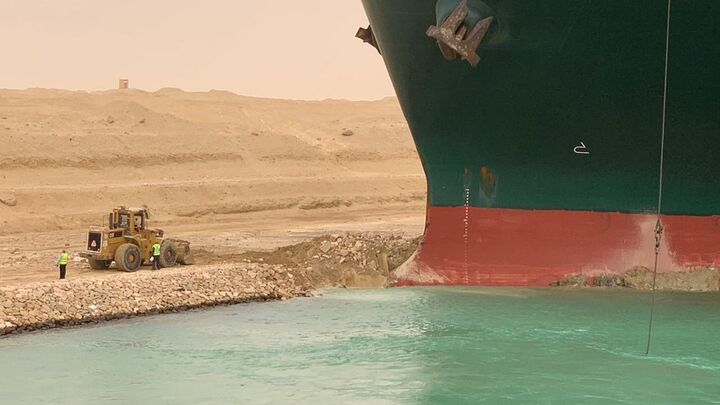 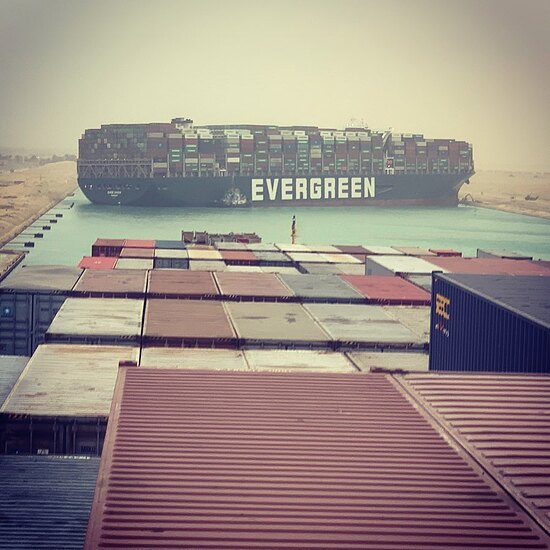 Suez Canal blocked by huge container ship named Ever Given which ran aground...

A container vessel named Ever Given ran aground on Tuesday, causing a backlog of ships in Egypt's Suez Canal.

I’m not sure about that. It might be further stuck than it looks because even if it was travelling at a fraction of a mph the sheer weight of it gives that ship a lot of kinetic energy.
I hope for the poor human being that was piloting that ship that they won’t be fired!

Yeah it is in there pretty good, lifted the front up a few meters and got in pretty far. They said it could have been wind that blew it off course, but if they were actively monitoring the movement speed and direction that should have been corrected for and it would take a consistent length of time blowing against it to move it like that not just one big gust. I suspect we will get more details as this goes on and they might be more and more face palm worth and they revise it.

Edit: Looks like it is already being cleared, not fully but some traffic can move.

Could be worse, could have hit the side, rolled, then had the captain run away…

There’s nothing quite like someone getting into a fender-bender in a vessel the size of your average skyscraper, resulting in the immediate halt of billions of dollars of trade, to put your own fuckups into perspective. 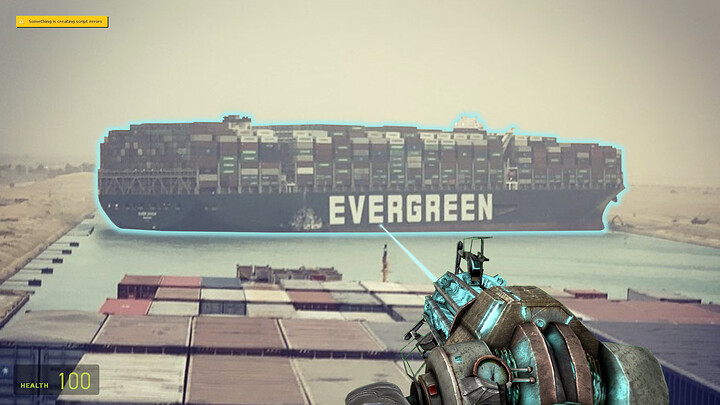 How is it that the ship came to be sideways in the canal in the first place? Did it hit the bank first and then get turned around?

How is it that the ship came to be sideways in the canal in the first place?

Container ships at traveling speed don’t “just stop”, they keep going for miles.
As those flat walls of steel are great at catching wind, my guess would be the wind picked up and when they noticed, it was too late.

We get something similar here during winter storms when relatively small (quarter length of that there) car freighters rip loose from the pier and drift through the harbour.

Yeah, I figured it must have been something like that. Stuck or unstuck you’d think they’d do everything they could to avoid getting into a position like that in the first place.

Yes it was wind, in a dust storm, and the steering failed all at the same time apparently @redocbew

That backup is giving me anxiety… would not want to be the capitan of that boat.

Party time for the other boats on either side of the canal.

You could say…
There’s trouble in the suez

Oh yeah sure but all 3 at ones 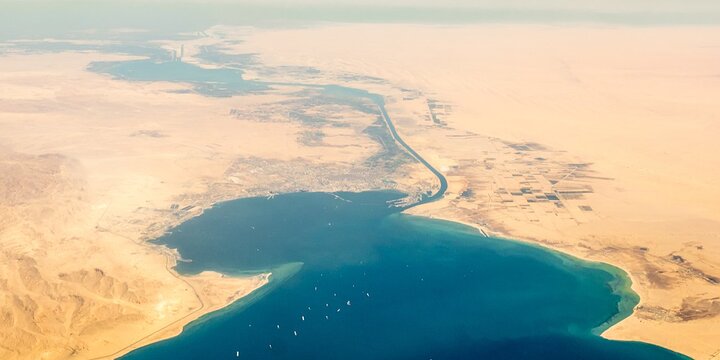 At last, The Reg online standards converter's time has come 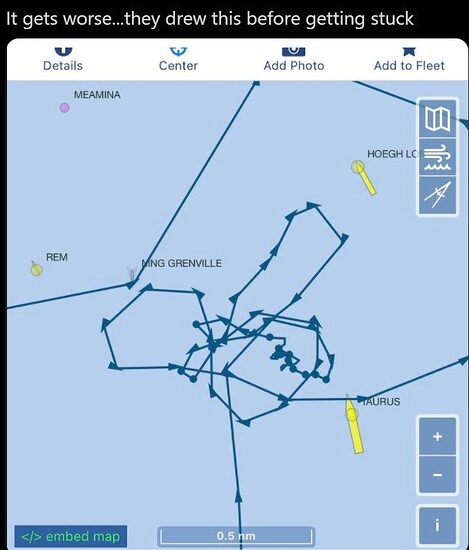 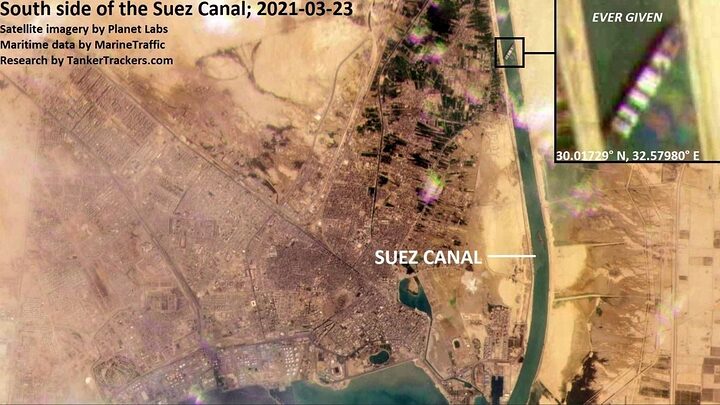 Did Cargo Ship 'Draw' a Penis Before Getting Stuck in Suez Canal? | Snopes.com

Some may classify getting stuck in the Suez Canal as a dick move.