To rackmount or not to rackmount... that is the question

My main motivation for starting this thread is that I wanted some feedback from users who have made the leap and rack mounted their home setup… especially users for whom noise had to be taken into consideration. I’d like to know the pros and cons… whether there’s anything you wished you’d known going in? Is Reverberative, low frequency noise more of an issue than just using desktop cases? I also have a few questions that don’t really warrant their own threads.

You don’t have to specifically address any of what is written below, as any input is appreciated.

My current setup is a bit of a hodge podge, spread out over the floor of a small loft space above my bedroom.

I also have the following which I don’t want to rack mount but would like to connect to the UPS when the need arises.

All of the above is spread out across the floor, on various pieces drawing board / old shelf / chopping block that’s was pain in the arse to clean… in order to keep them off the carpet (which isn’t ideal but I gotta work with what I have).

So I’m thinking of consolidating as much as I can into a server rack but I have a few limitations to work around. First and foremost being that I won’t be able to use anything larger than 18u, which is why I’ve set my sights on the StarTech 4POSTRACK18U. The second major constraint is that, as the loft is above my bedroom, noise is an issue… especially reverberative noise. Which is why at the moment, my Primary Server is standing on 4 Sorbethane hemispheres (which are amazing). Which do an acceptable job by taking the noise from “I can still hear it through these ear plugs, how am I meant to sleep?!” to “Is that the server I can hear or just the blood in my ears?”.

I’ve never noticed any low-frequency sounds out of my server rack, but it would be hard to hear it over the sound of the high-frequency sounds.
I have a 4U Norco case which is rather silent, as I put in a full-tower Noctua heatsink/fan, and replaced some of the fans with Noctua.
I have a 3U supermicro case with supermicro fans and supermicro fan’d heatsinks. It sounds like a vacuum cleaner and finding fans that would fit it that aren’t loud as hell would be difficult.
If I were worried about low-frequency sounds transfering through the floor I’d get some rubber furnature leg stops, and maybe some foam, pop that under the feet, and call it a day.
Baffling air sounds is a bigger problem since you’re essentially insulating something which really needs to breathe, though if you choose components carefully you can make 4U cases which are quiet.
3U cases are harder to silence. 1-2U cases always sound like vacuums IMO.
I put my switch at the back of my rack. I had no intention of doing structured cabling so it was easier to put that on the rear and run from that into systems directly.
Sorry, my response is all over the place, I’m very distracted today. 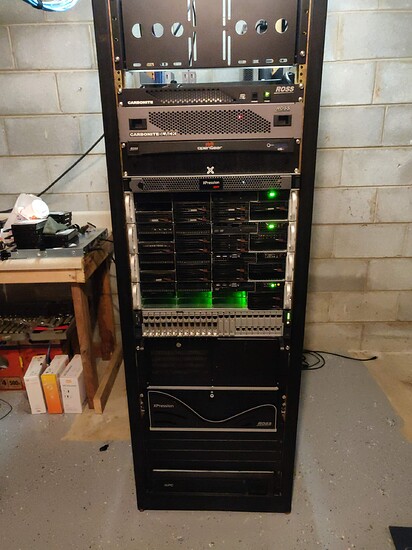 I have long since rack mounted my gear, and I love it, all the heat and noise is moved to my basement. I hope to build an actual closet around it soon so I can filter the air, and add some additional fire protection with steel studs, rockwool, and 2 layers of drywall. Plus I plan to install a power cutoff switch on the out side.

Now, it is not silent, my 48p HP switch is loud, as are some of the 2u power supplies. At startup/shutdown the servers sound like jet engines but tend to settle quickly.

General rule is more RU, more room to cool, or the more low power devices you use the less to cool. Slower fans, moving less air, means quieter operation but you need to make sure to lower the heat output at the same time or you will cook your gear.

This is also something I’m quite curious about I’ve gotten interested in the idea of building a PC after having only had experience with prebuilts and laptops except for a Raspberry Pi but don’t know if it’s better to try and start off with trying to do rackmounted and deal with any downsides of setting up a rack at my parents house and then moving everything if I move or if it is better to have the raspberry Pi a QNAP NAS my old tower and a tower case that would not necessarily all be in one central location and be moved if necessary the way I have moved cases in the past.

If you have space for it having everything racked is nice, because it enforces a certain kind of organization.

If you don’t have space for it, then you have a giant metal cage sitting in the middle of a room that’s constantly in your way. Then it’s not so nice.

Been great. I love my rackmount setup. 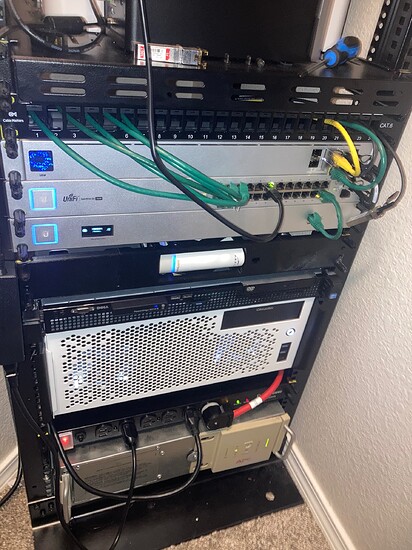 Used to own a LackRack, all servers (which were repurposed desktops in 2U cases) were powered on 24/7. They were a bit noisy due to the fans. I swapped all the fans, but the GPUs were still the loudest. The worst thing from all of it was the HPE ProCurve 2910al, which was screeching noisy.

I used to sleep in the same room as those for about 2 years, with the switch only having had it for a year.

All of them had 80mm fans blowing air to the back. They were pretty silent, but audible, due to how many there were.

Nowadays, I moved to low-powered stuff for noise, power consumption and portability. The loudest thing is my desktop, a TR 1950x with a RX 6600 xt and RX 6400 in an Antec P101 Silent case. GPUs are the loudest, together with the 2x 10TB HDD (the later which I will move to a SBC).

I now have just a basic picnic table that holds everything from the TR box to my SBCs, monitor, keyboard, trackball, switch and a few other small items. UPS is on the floor, power bar is mounted underneath the table. If I wasn’t transferring data, the TR system would normally be powered off. 0 noise.

Would I go back to rack mounted servers? They definitely used less space, because of the stacking and were easier to access (rolling the rack was easy, so I could easily get behind). The answer to the question is a guaranteed no, at least for now, probably in the future too. SBCs are powerful enough for my needs, I just need to finish the lab, I got so many more things to do on it.

If I was to go back to desktop systems, I would probably do another improvised rack mounting and use desktop cases. 120mm fans make a bit of a difference, enough to be noticeable. Either that, or I would use a 3U / 4U case.

I do intend to do another mini-ITX build around a Honeycomb LX2K, but I have a few options before racking. One would be to buy a table extension or a cabinet with drawers or something, to put the pc case on top. The other would be to find a square-ish mini-ITX case and place my current desk organizer (on which I hold the SBCs and switch) on top of the case on the table. Raijintek Metis Plus and Evo are options, with maybe an InWin Chopin as another option (probably more cases that I don’t know of).

I never had issues with the noise coming from the floor, probably because of the casters.

tl;dr if you don’t already own your own house, don’t rack mount, improvise a shelf with desktop cases and try to minimize noise by buying consumer products, instead of old enterprise gear.

are there any cases similar to the P101 that also have a USB-C in front/top IO? I know personally because one of my Yubikey’s is USB-C having a front port for USB-C would be really nice since I’d rather not need to get a dock. Especially since other than that the Antec case looks really good.

If you don’t need full usb-c speeds, then it might be easier just to get an adapter. I haven’t looked, but I’d be kind of surprised if there was one. Most front USB ports on rack mount cases are probably intended for OS installs and stuff where type c isn’t really a requirement.

if I was going rack mounted I’d get a dock I think. Though since I don’t own the house I live in I’m not sure if going rack mounted would be the right choice for my first PC or if I should go with a tower. I liked the Antec P101 Silent case that Biky talked about but it was missing a front USB-C.

Get one of these:
https://www.walmart.com/ip/Usb-3-0-Type-A-Male-To-Usb-3-1-Type-C-Female-Connector-Converter-Adapter-Type-C-Usb-Fast-Charging-Data-Transfer/996898396
I have one from Lention, it is made of aluminum, looks durable. I don’t use it often, but I used it with a type C to C cable and it worked ok. The adapter is so small that you could keep it full time on your yubikey.

I don’t either, but I do have a spare closet.

If you’ve got space for it, not owning your own place isn’t really a big deal.

Unless you’re planning on getting storinators or something which could destabilize the whole rack when you pull it out on the rails. Not being able to bolt it to the floor is the only real problem there. I’ve got a big ass UPS in the bottom, and the NAS is right above it, so the rack is pretty bottom heavy and isn’t likely to do that unless I do something really stupid.

Part of it is is just not being sure what kind of a case would be good since I’m waiting for testing results but I think I’ll probably go with the new ryzen just so I can do at least two computers in one. Though I might try turning my old tower into a server including a NAS and have the GTX 1070 be the graphics card for Windows either for it in a rack or in a case and sell the QNAP.

But I’m really indecisive. There’s not really a good closet nearby but I’m set up in the open space of the basement so as long as I have a set up with mostly consumer parts I can probably keep it from being super loud.

The annoying thing about the low frequency sounds from my current XL R2 based server is that you can’t hear them when you’re in the same room / loft with the server. It’s only when I’m in my bedroom that I can hear them. I don’t really have an issue with any of the higher frequency, airborne sounds coming from the server… the sound problems all come back to the fact that 10TB Seagate Ironwolfs are much louder than my old 3TB WD Reds.

If I were worried about low-frequency sounds transfering through the floor I’d get some rubber furnature leg stops, and maybe some foam, pop that under the feet, and call it a day.

My current plan is to make a platform similar to what drummers use. It’d basically be two sheets of MDF with Sylomer sandwiched between them.