In the past i was in charge of specing and setting up a Hyper-V server. Back then I chose to run four 4TB drives in RAID 10, in order to have redundancy and speed. Unfortunately, when running 10-14 VMs I think the drives are really limiting performance.

Now, I’ve been tasked with getting a new server and it looks like it’ll need ~8TB of usable storage. I’d like to know if Hyper-V Server 2016 supports tiered storage. We’re a fairly small company and can’t exactly afford to drop enough cash to buy 16TB (8 usable, 8 redundant) worth of server-grade SSDs. But of course, I also don’t want the machine to slow to a crawl when multiple VMs start hitting the disks.

I was thinking that four 4TB hard drives with a 1-2TB SSD cache might work well if Hyper-V supports it. Do you guys know if that would work, or if there’s another way to speed up disk performance without dropping several grand on SSDs?

This supposed to be internal or external ( DAS/SAN) storage?

Have you considered multiple pools and putting the heavy iop stuff on SSDS? and the rest on spinning rust?

Also what is your rough budget and requirements for redundancy?

Hyper-V does have tiered storage, I personally have never used it. I would make sure that you have a good backup plan if this data is at all important.

Storage tiers works on blocks not files, so in theory the hot blocks will get swapped to the SSD and cold blocks stay on the HDD’s. I’ve experimented with it, but never used it in production.

For a Hyper-V server the better plan may be to use a master read-only parent disk on SSD’s with differencing disks. Let’s say you will have 4 windows guest VM’s, all created to a common build pattern. Instead of having 4 x 127GB C drive VHDX files you now have 1 x 127GB C VHDX file and 4 smaller AVHDX files to store the deltas, suddenly your SSD’s go further.

Of three types of VHDX - Dynamic, Fixed and Differencing: 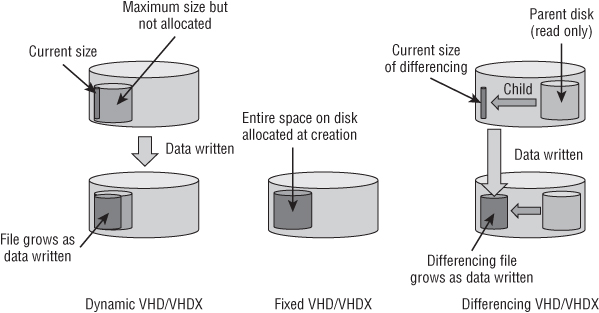