Maybe a gtx990? but I'm sure that will be similarly priced as a titan.

Oh no... They are using two titanX chips slapped on one PCB... So my educated guess will be TWICE the price of TitanX...
The other thing is FuryX2... My uneducated guess is Lower than twise the price of FuryX...
Guess which one will be overpraised and overpriced at the same time?
Because basically nobody talks about 295X2. No matter it beats everything in most cases...

I think I've reached my human limit with just one of these 40" 4k monitors. My brain wouldn't be able to handle three of them.

You are technically correct.

What this means really is: we need to get 6 more 4k Monitors and a couple more 980Ti cards to push this to a limit... and we could watch Wendell's mind melt.

No, not at all.. Not hard at all. Just need a machine that would have the PCI-E slots.

I think I'll get this accomplished the next time I visit.

Went to amazon to check out the 295X2 was not dissapointed 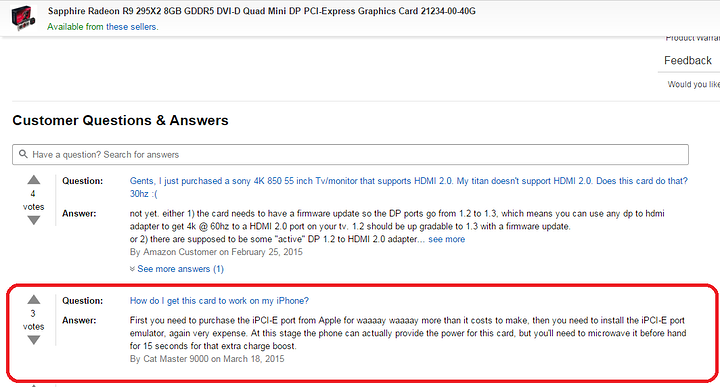 You made me laugh.

Well Cat Master did. Just wondering do I live in the same world as this guy??

Moses on a vespa!
Who do I kill to get that eye-slicing, ultra-sharp experience!?

At some point we are going to have to remove the black veil from the fluxmagazatron and beam Wendell into an actual screen. There, he can become quantum and be in three places at once ( each screen ) .

Im thinking a floating Wendell head, like a windows xp screen saver with animated eyes following the cursor ? You have to sustain him with spurious data files or he gets mad face and destroys vsync.