This is my rig, first PC I ever built 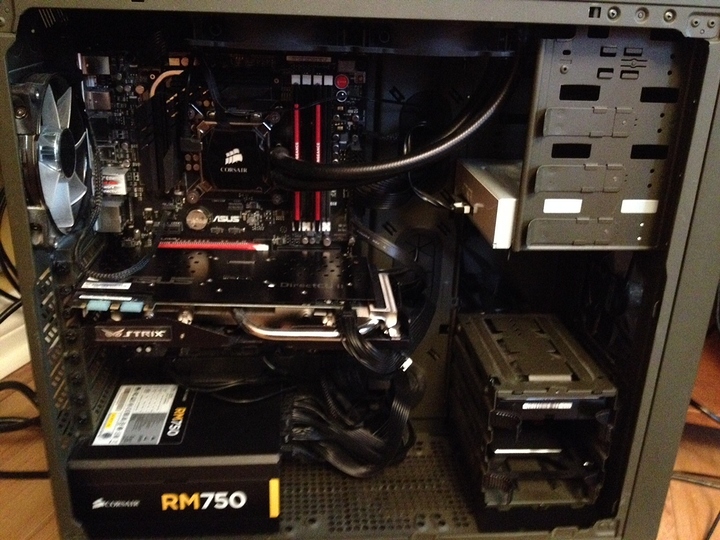 edit: Was to take off the redundant 8 pin GPU power connector connected to the other 8 pins going to my PSU. My logic behind that was to make room for airflow from the front fan, but I think the way I have it now looks a lot cleaner.
Also 4790k wasn't out when I built this, but I think i I might get it since 4770k is a terrible overclocker.

You should have gone with a 4790k. It'll drop straight into that socket if it has the latest bios update. And they're the same price.

I built it March of last year. I've been thinking about getting it, but I'm overclocked already, and I'm saving up for a Cherokee upgrade from a '94 malibu.

face desk
I didn't really think about that I just saw extra cable. I'll fix it. Thank you!

Welcome to the pc master race were now it is not good enough. :) push it ti its limits and scream for more:)

It's tidier than my first PC but back then we didn't so many options for cable management which has left me (and others) with bad habits.

The one thing i'd like to ask is "is there any room to tuck the excess cable length somewhere behind the mobo tray?"
That way if you get the whim to put in an extra fan the cables won't interfere when you put it in.

Side note, nice to see you haven't "BLINGED OUT" your rig like a lot of other first time builders.

Okay how's this, I uploaded a new picture in the OP. I've got everything flattened out behind the tray as best I can. The cables are super stiff and the room behind tray isn't that much when you have 40 short cables all going through the same hole.