Had a quick look and didnt see any topics on this (there is probably 50 and i am blind). I am a massive fan of the witcher games and after seeing the movie below i am even more excited for the 3rd game.
Last time i was excited for a game like this was with assassins creed 2 (and the sequels with etzio)

I know it isn't game play but it definitely got me excited.

yeah we are all waiting for release on gog.com

i am just hoping it has a linux release.

from what cdproject red told us; not at release. But since its drm free it should be quickly out on linux too.

It'll have it eventually. Witcher 2 was ported to Linux and cdp is pretty open-source friendly.

hope so i have no intention of running windows any time soon.

still you can be sure at day 0, you won't have linux version (so good luck with wine) maybe it'll work. Maybe it won't.

You should think a month from release or more for linux distro.

For me I will be waiting until I upgrade my rig. My old i7-950 needs an upgrade and I will wait for the upcoming Skylake CPUs if I can.

Also a Linux version will be nice as I may be using it for gaming more often in the near future.

yeah i wont be buying on day 0 will wait for a price drop. and possibly the 390x.

Still says 80 bux for me at gog

You can transfer and activate in GOG Witcher 1 and Witcher 2 from steam if you have them, the price for me is $35.99 with the disscount for having both games.

Awesome will have a look when I am on the pc.

Found it thanks for the help

edit: even with the older games its still 71 bux for me.

Sux to be in Australia some times

Fuck man, that is expensive...why not asking some friend at the american continent to buy it for you? GOG has no problem at all with that.
I just check it and there is an option to "Gift this order" so in fact, you can ask someone to buy it man.
Look: 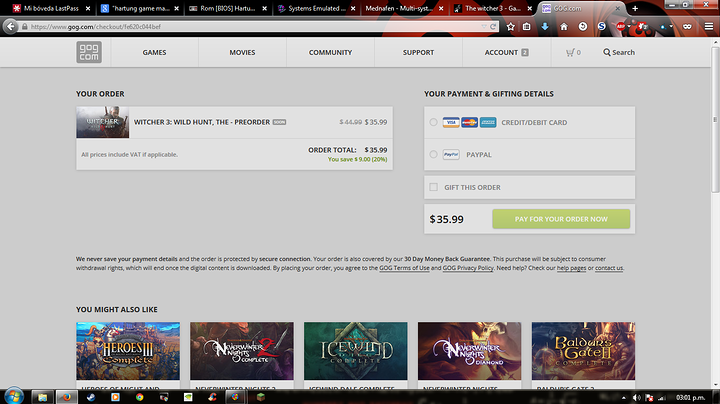 aussie dollar is in the hole at the moment. so it is just the conversion.

works out at about 38 usd

on a bonus note gog realise i am paying more and are giving me a 9 dollar credit of my next order.

Oh i thought you were talking about usd all the time, it was weird because GOG doesnt have local currency sytem. Anyway I think its worth because no DRM man.

they must have a currency system now.
mine says A$71.99 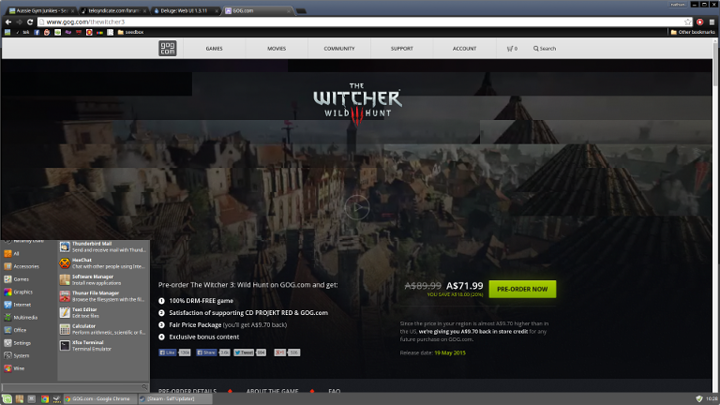 I didn't knew that, there is not local currency here at Mexico, but, 36 usd dolars for me is $548 in local currency, so we are in the same boat as australia...

Available: May 19
This game will unlock in approximately 1 month, 3 weeks, and 9 hours

So basically an eternity.