The discrepancy in Bit/Alt-coin price between markets

I notice that crypto currencies have notable differences in price between EU/US and South Korean markets. 1 XBT costs $2708.56 at GDAX while the price at Bithumb (South Korean market) is equivalent to $3040.78 but in their currency KRW.

Why isn't it a viable strategy to transfer XBT bought in EU/US markets to South Korean and withdrawing fiat currency over regular bank transfer? If this worked prices would equalize so I guess it doesn't? Is there some legal or language barrier?

Many trading platforms will impose a significant delay when withdrawing money. So

Still, a 10% gap is considerable. So this could be viable.

It is an interesting topic. When someone dumping over a million $USD of etherium and flash crashed the market on one server. Its a strange new world where we expect money to be somewhat stable.

I read about that but I read an analysis suggesting people set up fails-safes in algo trading that might not have functioned as intended. After all the market did recover.

Some of the fail-safes facilitated the crash. Once the price had dropped past a certain point the automatic stop-loss-orders kicked in, causing a lot of bots to sell even more etherium, pushing the price even lower...

At 1 side I wish banks could get involved and allow trading to speed things up and make it more standard..

But side 2 is fuck banks they've already gotten into BTC and are just going to keep making it worse.

Edit: Withdrew 100$ of BTC by the time it went through between price fluctuations and % cuts I got 80. Took 24 hrs for the withdrawal.

In my opinion until Amazon or Newegg except bitcoins Bitcoin mining is a waste of time.

What's mining got to do with this? Mining generates money. How is that a waste of time?

What's mining got to do with this? Mining generates money. How is that a waste of time?

I guess I didn't explain my reasoning why Bit/Alt mining is a waste of time and computer resources. I am under the impression when you are Bit/ALt mining it ties up all of your computers resources. If I am mistaken in my assumptions there are still several problems with it.

I agree that most crypto currencies are useless for payments, but that's not really their purpose. More often than not the projects behind the coins use the blockchain as mere basis for something else. The blockchain, and by extension the miners, are merely used for securing the network and the coins exist purely to incentivize mining in the first place. That's how I see it at least.

Yes, you are a bit mistaken. I had a second GPU that was really not being used because crossfire sucks. So, on a whim, I loaded NiceHash, and and now I mine the secondary GPU full time and the primary during low load times (like writing this post). I stop mining on the primary only while gaming. I even watch videos and (sometimes) movies with both cards mining. Since my rent includes utilities, all proceeds are 100% profit. About once a month, I sell the BTC payments via a 3rd party service into my PayPal account in USD. I then use PayPal to buy toys at NewEgg etc.. I don't usually pay much attention to micro fluctuations in BTC value, but if it's been low for a few days, I'll just wait a week or two and transfer it when it's back to normal.

Edit: This is my first post so please be gentle if I failed to obey forum conventions.

Im new to this as well but I have a gaming rig and when its not gaming for me I cant see how making $4-5USD a day is not worth it. Im at about $20USD now and my first payout is at about $30USD. When that happens and I put the bitcoins into my bank or paypal I will realize making money from electrons and math is possible.

When you take a top down look at it. It is insane to put money in a math problem that only lives in a digital world. Nothing about life is sane.

About once a month, I sell the BTC payments via a 3rd party service into my PayPal account in USD.

Could you elaborate on that? Which services are you using? I have ~200$ sitting around and am not sure how to best get them to paypal or any other useful platform really.

Not sure about paypal but most will let you withdraw via bank transfer if they offer service in your region.

edit: *most or many exchanges

I sell the BTC payments via a 3rd party service into my PayPal account in USD. I then use PayPal to buy toys at NewEgg etc..

Thanks for correcting some of my misconceptions, I am just wondering do you happen to know much the 3rd party service charges for handling the selling of your Bitcoins and depositing the proceeds into your PayPal account?

Could you elaborate on that? Which services are you using? I have ~200$ sitting around and am not sure how to best get them to paypal or any other useful platform really.

The rates appear to be MUCH better than most exchanges that transfer to a bank account. AFAIK, they pay over the current rate. I hate giving my bank details to anyone, and I prefer not to have my mining earnings get washed through my checking account, so BTC-to-PayPal works very well for me.

Assuming you spend it using PayPal or you can transfer from PayPal to your checking account free, I think this method is cheaper than the direct-to-bank exchanges, because they have a number of transaction fees that they nickle-and-dime you to death with e.g. flat rate transaction fee followed by export fee followed by minimum transaction amount fee (if it's a small sum).

I tried to dry-run a small transfer of $5 worth of BTC direct-to-bank and I think I got $1.32 in my account after all the fees. Lesson learned hard. Often the transaction fee is $1 and the "exchange fee" is usually 2% to 3%. I've seen a not-less-than cap of $5 per transaction also. Read the fine print on those exchanges. They exploit people that want some privacy.

That BTC-to-PayPal site has a really ghetto feeling web site, but it feels like a mom-and-pop outfit that just wants to be fair and make a buck or two servicing ordinary people. That's my general spidy-sense of it after using it 3 times. Kinda reminds me of GNU Linux, just do one thing and do it well.

I was just on Hiribi.com so I took this screenshot as an example of their exchange rate. As far as I can tell, there are no transaction fees and you get well over the current common exchange rate.

The applet is smarter than I first thought. You can enter either the BTC field or the dollar amount that you want deposited and it does all the work for you. Like I said, do one thing and do it well. They seem to understand that concept.

Also, the payments seem to arrive from random named people in medium-sized amounts to avoid the PayPal algorithm of doom. I think they try for $200 or less on each payment item, so you might see more than one payment arrive from different named people if the amount is large.

Another item of note is that I dumped a block of BTC that didn't quite land on an even penny and they sent me an email saying that they created an account for me and my change (actually less than a penny) of BTC was there in case I wanted to use it in my next transaction. That's some serious dedication to principle when they bust their chops to save my 0.3 cents.

Obviously, it's silly for less than a penny, but it must have been an artifact of how the code handles a transaction that could not be processed after taking your BTC. 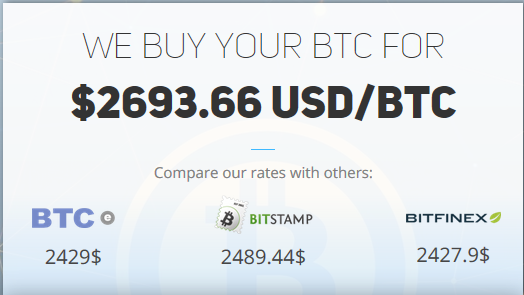