The AMD vs Intel laptop conundrum

This post is mostly based on experience from the intel 10-11th gen and AMD R7 Pro 4750U in ThinkPad T-series T14s, T14 and some X1 notebooks and experience from using and supporting a number of such devices with both Linux and Windows.

Firstly, I love the AMD 8 core performance and the efficiency that the platform brings, how well it handles multi-threaded workloads and virtualization. From a performance standpoint there is little competition from intel in my opinion but the AMD option falls short in other areas. I don’t have enough experience with intel 12th gen business laptops to have an opinion here yet but I prefer to wait a bit before adopting it myself.

This is not to bash AMD but some issues and support cost often overshadows the benefits and better price that AMD brings.

I guess this is a about sharing my experience and hearing if other’s have seen the same? But I also want to ask if we see signs of AMD coming close to ironing out such issues in newer or upcoming generations of the Ryzen and Ryzen Pro laptop platform?

I’m using Windows on my previous (Thinkpad T470 Intel) and current laptop (Thinkpad T14 AMD). Between the two, I agree that it does feels like the T14 fails to resume properly from sleep a little more often.

On the other hand, I used a USB-C hub (network, USB, HDMI ) instead of a dock and don’t have any problems with either my previous or current laptop that required drastic action such as resetting the laptop.

Thx, which wireless card does your T14 have?

Availability isn’t great because AMD lacks major fundamental functionality to be remotely competitive for businesses and enterprises setups or is plainly rough.

Docking is one major issue, irregardless how much you want to bash on Intel Thunderbolt is solid and just works compared to random USB-C dongles and docking stations.

You can find models using Intel WIFI and whatnot, don’t get consumer models which are built to a cost above everything else. In worst case you can change out the wifi card yourself, this is however not optimal if you’re buying bulk for obvious reasons.

Despite being more “efficient” AMD counterparts tends to have pretty poor battery life in pratice. I’ve never looked into why but I’ve always found Intel’s drivers to be much more polished especially on Windows compared to AMD. Just to be clear, graphics (3D) performance is better on AMD but in 99% of all cases it doesn’t matter in the end. As long as it works and hardware acceleration doesn’t suck you’re pretty much all set.

What you also should keep in mind is actual thermal performance, very few laptops can actually sustain 3+ Ghz on all cores for more than a minute or so due to thermal throttling so in many cases it can actually make more sense to get a slower CPU on paper because it performs better in practice under stress. This is also why getting Zen 3 if you’re getting AMD is of much interest. From what I’ve gathered Intel’s 12th gen struggles a lot with this issue unfortunately even U-series.

I’m so far very satisfied with my Gigabyte U4 UD (rebranded Clevo L141MU), it’s no Thinkpad X-series but at 550 EUR it’s was a bargain but it’s not for everyone. The main shortcomings are battery life (it’s tiny, 36Wh), Thunderbolt charging is limited to 35W (I haven’t confirmed, just read about it in one review) and it gets quite loud under load. Given that it uses an i7-1195G7 I’m not too surprised, in that regard I think a i5 CPU would’ve been a better choice but it’s still a great laptop at that price point.

One thing I learned afterwards is that the CNVi platform/interface is a bit of a black box.

You can find models using Intel WIFI and whatnot, don’t get consumer models which are built to a cost above everything else. In worst case you can change out the wifi card yourself, this is however not optimal if you’re buying bulk for obvious reasons.

Recently I’ve bought some T14 and T14s with the MediaTek WLAN, guess it’s the shortage so not even the business models were safe here.

edit: but the models I got earlier came with something intel, probably AX200

That being said, there other brands such as HP that offers business oriented models with AMD CPUs if that’s a hard requirement.

Note, I have replaced the Wi-Fi card with an intel ax210.

(Note you can still get it this 4k model fully spec out on Lenovos outlet site for about $1200 before tax).

I have no issues with Linux. It runs absolutely silent for the most part. Take a look at the notebookcheck review, they experienced no throttling. I connect it to my older Lenovo gen 3 thunderbolt dock to drive a 32inch 4k monitor and a 27inch 2k.

For Linux, it’s absolutely fantastic. 4k on 14inch is a little overkill, however the panel is amazing in terms of color accuracy and brightness, plus scaling 200% at 14inch, 4k makes reading text a real pleasure.

Don’t believe its just a Lenovo/AMD thing about MediaTek WLAN being common, Lenovo uses Intel wireless on their gaming laptops with Ryzen CPUs but you do see many OEMs struggling sourcing wireless cards due to the chip shortages.

Sleep/resume higher risk of failing has been around since AMD’s first APU Llano, from what I’ve seen from crash logs is its something to do with waking up the IGP.

I don’t own a Thinkpad with an AMD CPU, however I’ve had weird external monitor detection/resolution issues via USB-C dock with a gaming laptop(Ryzen 7 5800H) but the extremely strange thing is when I force the dGPU to be always active the USB-C dock issue goes away.

AMD had a bigger hill to climb, when it comes to claiming laptop market
…Wasn’t too long ago, that they’re only relegated to hosting A__ APUs [as a base CPU]
As AMD be gaining more ground with SIs, they’ll gain more component-driver support

Based on my experience with the go elite book gen9 alder lake systems…. You look at them funny and they ramp fan (even i5). I’d seriously look at AMD due to them not trying to boost past 100-200 watts in a portable.

I have a fleet of intel laptops (elitebook of various generations) here that also have usb dock issues, sometimes need battery disconnect to recover, etc.

Shit hardware is not an amd exclusive issue any more.

Have you not experienced any good laptop ever?

…If you’re referring to: 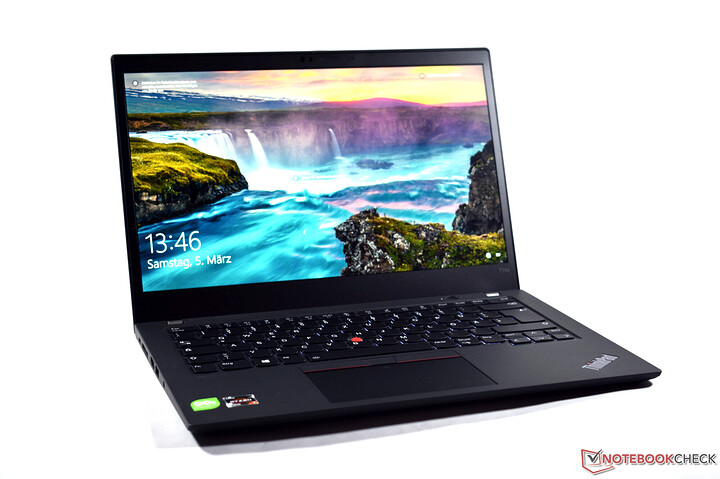 Thanks to its AMD processor, the ThinkPad T14s is lightning fast yet efficient at the same time, and its ThinkPad-style keyboard and robust design turn it into a more than solid business ultrabook.

It does throttle (PL2 vs PL1), not as bad as lets say Zenbooks though

8x 2.7 GHz is still quite respectable to be honest.

The PRO 5850U is 25W in that configuration, so it’s more that it isn’t staying at turbo durations as long. 30W is over spec, and 22W is just under. AMD rates the base performance at 1.9GHz for that chip, it’s impressive that for 3W under TDP it managed to sustain 800MHz above base clock.

(Throttling suggests it doesn’t even sustain base clock, or any of the rated clocks above base clock.)

I’m using the Asus G513 german edition. It has a Ryzen 9 5900HX and a discrete Radeon RX 6800m. Display is 1440p with 165Hz freesync. The laptop by itself works out of the box on most current or last year Linux kernels.

I can play most games on 1440p max settings but setting performance preset clearly causes thermal throttling. Its okay normal mode is good enough for me: 80-100fps-ish on FFXIV 1440p maximum settings.

My biggest hurdle however is the utterly trash that are the Asus utilities required to control the unit on Windows. It is borderline nagging crappware.

I have a Lenovo Ideapad 5 with an R7 4700U running LMDE5. I chose it mainly for programming (Python & making games in Unity). Performance is great for a £270 used device. Battery life is bad, but it doesn’t matter to me because I only use it plugged in at home or in a hotel.

The integrated graphics is enough for me. On Steam I play only strategy and puzzle games. My game development targets mobile so if it wouldn’t run on this laptop it won’t run on most mobiles either. Kind of a safety check.

One issue I encountered is using an external widescreen monitor. 3440x1440 is not supported. I have to reduce the resolution to 2560x1080. Any text looks horrible in this resolution.