Techreport and Phoronix have done some very good tests with early hands on of the second gen threadripper parts.

I’m doing some testing of my own for upcoming videos with a loaner 2990WX from ASRock, 128gb of Crucial ECC memory I bought and 128gb of 2933 Threadripper-specific memory I’ve borrowed from GSkill.

This “blog” is for me to gather my thoughts. This isn’t complete.

Here’s some data with IndigoBench. It is interesting because it’s cross platform and works well on Windows and Linux.

AMD's Ryzen Threadripper 2990WX CPU puts 32 cores and 64 threads in a single high-end desktop socket. We thoroughly tested the 2990WX to see whether all that horsepower is enough for AMD to lay claim to the title of the fastest desktop CPU around.

For the 2990WX today I took a bit of a side tangent. When working on a video the other day, I noticed that some games seemed to be running better when preventing them from being assigned to run on CPU0 on windows. (You can do this via powershell, or with the relatively handy ProcessLasso app from bitsum tech).

The Indigo benchmark scores improve dramatically on Windows when I did this, but the score still doesn’t match its Linux counterparts.

Still, I wonder if this type of thing is part of why we see performance regressions between the 2950X and 2990WX because, if the software is working properly, the 2990WX should be about as fast as the 2950X in the worst case scenario (on techreport, for example, shows the 2990WX scoring a paltry 1.642 – A result I was able to replicate by just running Indigo. Even with the Windows 10 Pro “Ultimate” power profile. Even with Ryzen Master turning up the juice.) 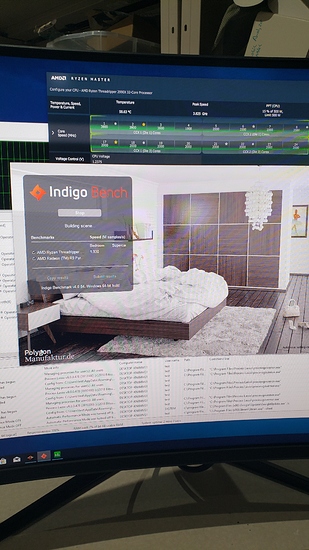 IndigoBench bedroom scene, only change is telling process lasso not to let this process run on CPU0 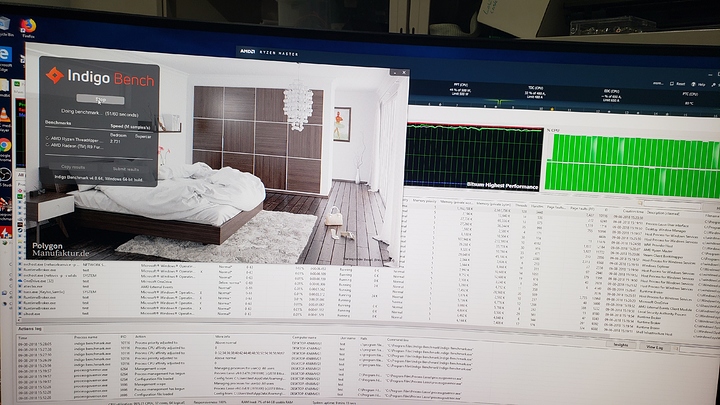 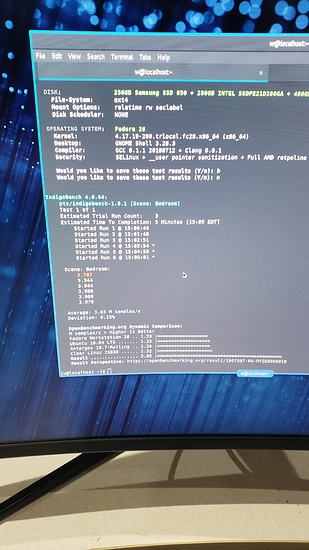 Will blog more as I have more data. I need something more robust to keep track of my notes.

Curiouser and Curiouser… down the rabbit hole I shall continue to go.

My bet is that Windows is doing something important kernel related on CPU 0.
Something which Indigo depends on, that if slowed down is causing the entire system to slow down as it waits for something on core 0 to complete.

For Windows what happens if you load up Core 0 with something else and then run indigo on all other cores except core 0?

… Or leaving logical core 0 open gives Windows kernel and system components a preferred optimal CPU to use, instead of allowing it to assign critical threads to the less efficient back half of this processor.

That’s also something worth testing.

Tested:
Unselecting any cpu improves things whether its a near or far cpu… but cpu0 seems slightly better than any other.

Pbo is doing 3.4 to 3.6 GHz all core so its making it hard to really nail down though.

Could You do a real world application test?
For example: compile a big open source project like the Linux kernel or Chromium browser. I would like to know what inpacts compile times more: CPU, RAM or SSD/HDD.
I love Level 1 Linux channel, please post more content that matters in the real world (non-gaming).

@wendell not specific to ThreadRipper 2, but my 1950x always boots with the clocks all over the place, even when using performance governor.

I have been using https://raw.githubusercontent.com/r4m0n/ZenStates-Linux/master/zenstates.py to disable c6 states and then the clocks stay very close to what it should be (no change in temperature or power draw). This has given me better latency overall on linux and on the vfio setup.

Curious part is my bios says C6 states are disabled.

edit: I read somewhere that this is what ultimate power profile for windows does, ignores C6 states. Honestly don’t know enough about it.