To begin, I would like to applaud and thank you guys in helping spread and encourage the use of *nix.

Now, I know I saw one post similar to what I am about to say, but I kind of wish to reiterate.

I believe the direction that you have started your Linux videos, and some tweets I've seen by Logan, are setting people up for disaster. You guys keep advocating the use of WINE, which is fine, it is an amazing piece of software, but I don't think y'all should be showing people how to do things as if they were on Windows. Instead, you should be showing working alternatives to applications commonly used on Windows that don't have native support on Linux.

For instance, instead of showing how to set up a Windows VM for Microsoft Office, show good alterbatives like LibreOffice, or OpenOffice. Or instead of using Foobar2k, show of Clementine, Amarok, Banshee, Rhythmbox, etc.

I believe the point of these videos is to not try and show how you can augment Linux with WINE or a VM, but rather teach what Linux has to offer in its current state.

I'm not saying showing off WINE is bad, I just do not think it is where we should be starting. The thing is I believe there is a lot of dependence on Windows, for obvious reasons, but we shouldn't be depending on Windows once you move over to Linux. If you keep giving into your dependency of Windows by using WINE or a VM, then you'll more than likely just go back to Windows. Using Windows is fine, but for the purpose of these videos I just don't think we should be depending on it so much.

Sorry for all the text. I hope no one takes this offensively, it is just my opinion on the matter.

i think the reason they showed people how to use a VM to run office is because it really is one of those software suites that you really can't get away with using open source alternatives. If you have a job where having correctly formatted documents is paramount, using office natively on a VM is the only way to have peace of mind.

I believe the direction that you have started your Linux videos, and some tweets I've seen by Logan, are setting people up for disaster.

I presume Wendell via his video-tutorials is assisting people to 'transition' into the Linux environment gradually; at least that is the message being conveyed to me.

And a 'gradual transition' is often better for learning, and assimilation with any new system, whether a computer or a machine. 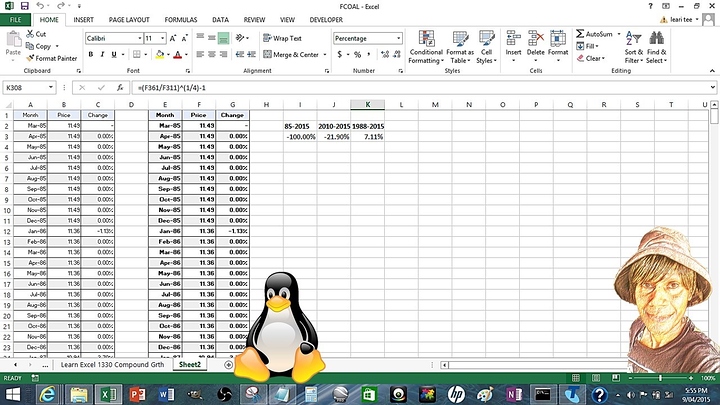 Pretty sure I seen Wendell make a comment about the direction they are going.
They are starting off with a transitional faze then will showcase software.

Im not sure what I feel worse about, Internet explorer or Telstra.

Has to be telstra. At least ie is a little bit useful

Fear of the unknown often prevents people from exploring alternatives and not just in the wonderful world of tech stuff. Basically, I and others on this site, who use Linux full time, are in complete agreement, but a cautions approach is needed to wean others away from Windows.

A lot of people here are young gamers who naturally want the latest game running at the fastest speed possible, regardless of other uses for their PCs. Steam has helped Linux greatly in this respect. Give them time, they will soon see the benefits of running Linux with Linux open source software over the proprietary OS's and their restrictive offerings.

I'm pretty sure Wendell has a plan and this is just the opening phase.

For instance, instead of showing how to set up a Windows VM for Microsoft Office, show good alterbatives like LibreOffice, or OpenOffice. Or instead of using Foobar2k, show of Clementine, Amarok, Banshee, Rhythmbox, etc.

I believe the point of these videos is to not try and show how you can augment Linux with WINE or a VM, but rather teach what Linux has to offer in its current state.

While I agree with what your saying, in defense of Tek Syndicate's first few videos on Linux they showed me a way that I can make the transition and maintain a Windows desktop should I have the need, I really don't, but do find virtualization intriguing and something I want to learn about, everything from virtualbox or VMs to virtual LANs has caught my interest. So in my case it was the right message at the right time.

I think Logan and Wendell are doing, at least, an acceptable job at advocating and enabling people to make the transition from one operating system to another. Even if they did somehow do it "the perfect way" (whatever that means) there would still be user errors and learning fumbles by minorities of people.

Tek Syndicate is fighting an uphill battle on this subject. A lot of people haven't been bothered to try to use, or learn, Linux because it is different from what they are used to, but there are a lot of misconceptions and ideas about Linux, from the outside community. One of those misconceptions is that there are things that Linux can't do that Windows can - like run Microsoft Office. Introducing people to WINE is a great way to dispel a lot of these notions.

Remember, when you teach a whole mass of people something, especially on the internet, you almost, by default, have to cater to the lowest common denominator. This sounds demeaning and offensive, but we are dealing with a group of people whose general interaction with computers is mostly a passing interest and general usage - they play games, and might do some streaming and video encoding. They do not have the invested interest to take the time to learn the nitty-gritties of an operating system that they may find to be not ergonomic - they want to pick up and go, plug and play. If curiosity entices them to explore the OS a bit more, cool beans. Either way, the end result will be that the greater amount of users will provide more feedback, and more demand, so that distributors will provide more support to the end user.
... Which means that by showing more people Linux and WINE, the end result should be that WINE becomes not needed, because the software will become Linux-supported.