What are you doing?

Hello. I'm a junior grey beard looking forward to building a powerful dual-booting desktop that stores all my data in. I need help researching different hardware configurations for my new build. i'll provide a bit of context.
Links, suggestions, keywords and reading material are appreciated.

I'm more of a BSD guy. I'm surrounded by old hardware from 2000's & 1990's (types of computers you find only in basements) which i run OpenBSD on, bundled with basic cli applications like lynx, irssi, youtube-dl, etc, i find them very comfortable. Sometimes there is need for basic gui applications like Inkscape & TeXmacs, and those work fine too. Everythings lovely.

Hopefully i don't have to dig up files with fsck ever again. I'll start storing data on something else, like zfs or hammerfs.

Why merge nas and desktop in one?
1. It's Cheaper to buy fewer memory sticks. ZFS memory requirement is no joke.
2. I'd rather not do any file sharing, being the only one who needs access. On the other hand i do have a lot of devices, but living in a small house: i'll just consume the media- and store my work in the local machine.
3. I'm quite likely going to lug the pc around sometimes, having everything in place where ever i go (online or offline) is a plus.

What am i going to use my machine for?

At the time of writing i store my stuff on Dragonfly BSD system powered by 2008-ish pentium. Hammer's great tho, it's probably closest "advanced" filesystem that's GPL compatible. It has great features. But only nvidia's proprietary drivers will work for 3d accel. They provide those for Linux, FreeBSD and Solaris. 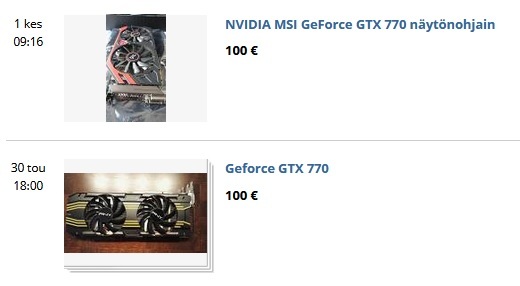 https://www.tori.fi/koko_suomi?ca=18&q=gtx%20770&sp=1&w=3
I'd like to run two of them in SLI sometime. Adding second gpu may or may not end up with huge gains in workloads and games. And on the other hand, bring a lot of problems to the table. Or in future be outperformed by a large margin.
And you know: nvidia is not free software friendly. Questions like that.

MITX formfactor feels satisfying, obviously no SLI. There is a challenge finding a small case that does have a hard drive cage. It's more fun though. AM4 itx mobo's are coming soon, of which probably 0 will be equipped with ecc support.

Ryzen is often recommended for multi-threaded workloads at a cheap price, but i'm after good game performace. I do my work on OpenBSD, which isn't bleeding edge, does not support Nvidia cards at all, and iirc, intel cpu's are preferred. I still love that OS to bits and wouldn't go anywhere else for daily driver.
So "get a gaming cpu" maybye? I'm pretty sure that the rig will end up being purely for video games.

Upgrading is in place now. I've used athlon x250 for years and years. AM4 platform could serve me for as long as athlon did. =)

Some server features like ECC and robust virtualization would be nice. ECC may be hard to find for desktop mobo's when it's little bit slower than regular ram. That number gets nearly non-existant when choosing AM4. Michael W. Lucas said that zfs with regular memory is still better than other filesystems with ECC. It's still good to have it. Atleast we get DDR4 and IOMMU is somewhat there.

If i were to build seperate OpenBSD workstation, it would be wierd to store all data on "gaming pc", but right now i'm not bothering with a seperate nas, maybye in the future.

General Hardware Recommendations I’ve built a lot of ZFS storage hardware and have two decades of experience with FreeBSD. The following are some thoughts on hardware. Intel Versus AMD FreeNAS is based on FreeBSD. FreeBSD has a long history of...

The choises that came up:
1. Which cpu for playing games, only games really
2. ECC and Memory in general
3. SLI and motherboard's form factor

and it feels fantastic =)

Well if you have the money for it.
Then maybe the upcomming AMD Threadripper X399 platform may have all the answers for you.
Of course we dont know any prices yet, but AMD will probablly undercut Intels new X299 HEDT platform significantlly.
The Threadripper cpu as they have presented will be a 16 core 32 threads cpu with 64 pci-e lanes.
I guess that amount of lanes might suite you pretty well.
There might also be comming more variants of the Thread ripper cpu's aswell, with more or less cores.

That would be sweet! Thank you for replying.
But threadripper is way too overkill, i'm looking at RYZEN 5's and such around 400-500€ euros. Likely less than x399 motherboard.
Any ol' stinky quadcore is a large improvement.

I'd go for amd's ryzen, doesn't really matter which one (1600x has pretty good gaming performance, but for nas tasks any ryzen processor will do).

Afaik all amd's ryzen processors support ecc, but not all ryzen motherboards do, so you should check which motherboards have support before buying them.

Recent updates have also made virtualization on ryzen quite solid, and sli compatible mobo's on ryzen are also cheaper than on the intel side.

Apparently asrock might provide AM4 itx motherboard with ECC. 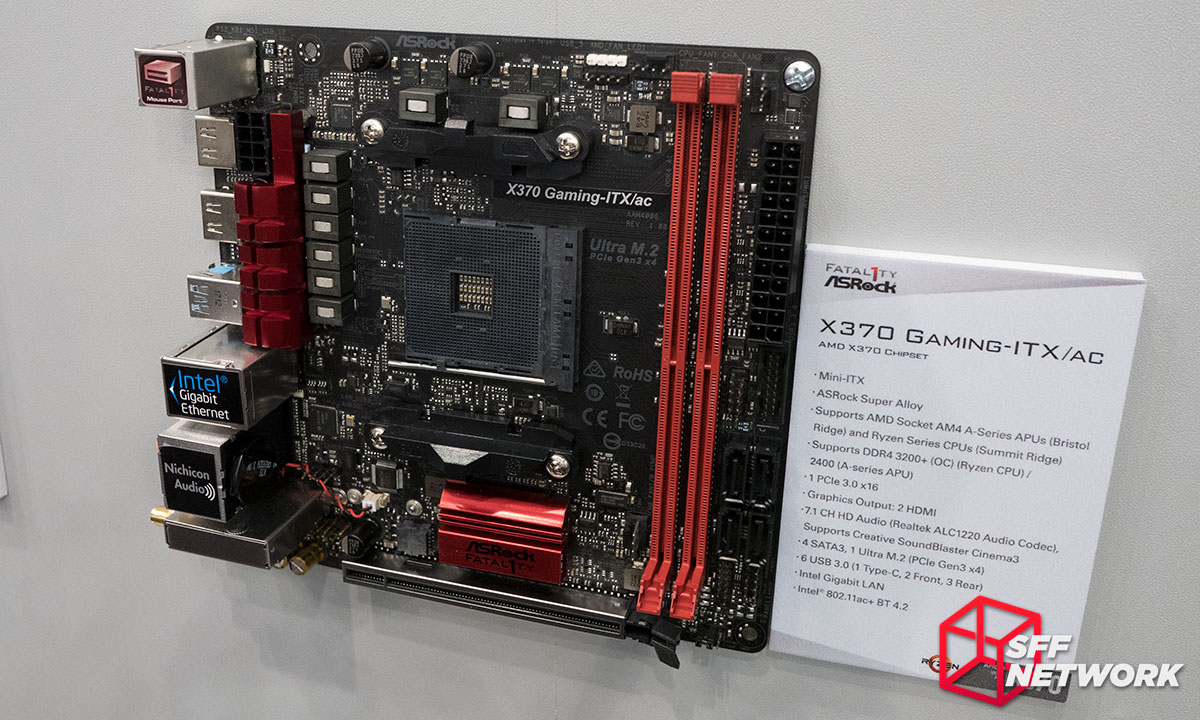 ASRock had their hotly anticipated AM4 Ryzen Mini-ITX motherboards in their booth and we were sure to snap some pics of the both of them! The specs are identical for both models and are as follows: AM4 socket Support for DDR4 3200MHz+ (OC) on Ryzen...

And gigabyte too! Looks promising. 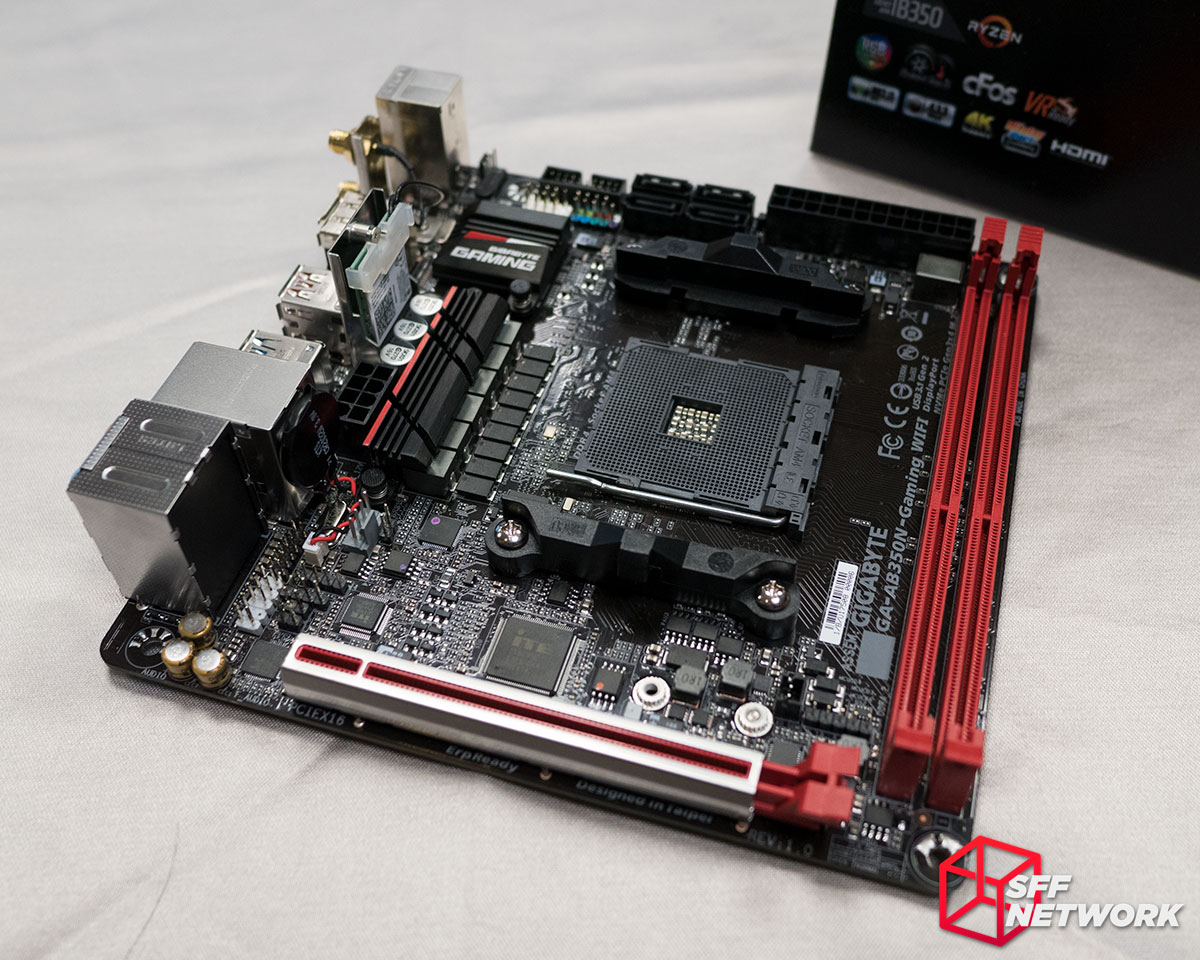 Ryzen small form factor fans rejoice, GIGABYTE introduced the GA-AB350N-Gaming WIFI Mini-ITX AM4 motherboard at Computex! Joining the shortlist that includes the BIOSTAR X370GTN and the upcoming ASRock X370 Gaming-ITX/ac (as well as an AB350...

Ah okay, well Ryzen 5-1600 with a midrange X370 up uppertier B350 board would also be a fine combo.
If you are looking into mini itx, then i would highly recommend to grab one of those upcomming Asrock ones.

1600, now that's a cheap 6 core!
All ryzen 5's seems like a good option. For starting point i pick the case that i like. Then see what cpu cooler clearance it has. If it can't take Wraith Spire cooler might as well get 1400 for now. OC it later.

And i'm looking at silverstone sg05 with modding hdd cage in front/top, or maybye cooler master 120 & thermaltake cube cases, those are still compact and can house 2x 2.5 ssd's + 2x 3.5 hdd's. Evga hadron won't do because the gpu isn't blower style, and i'd need molex to sata converters for psu.
Optionally old school 5.25 optical bay will come in useful, i use dvd-rw's to install os's. Maybye replace other ssd with M.2 for 1 more sata port while at it. I even thought having a itx case with dual 5.25's and install hotswap bay into it. Suprise suprise there simply isn't such itx chassis (other than 1 cube thermaltake one) that can house such a silly things.
Silverstones cs01 is my new dream case, if it could support dual slot video cards. They're working on SG14 which is close, but not that much storage i belive. I may skimp on case so i can buy better parts in it.

For bigger storage mATX/ATX makes most sense. All mini/mid tower cases easily support 2+2 drive configuration. Smaller inexpensive matx side there's SG11's and Cooltek U3 for cheap, but i think matx tower isn't much smaller than atx tower. And some smaller cases have piss-poor airflow.

Another option was thermaltake core g3, which isn't that much bigger than slim pci riser cases. And i could lay it horizontally under my crt monitor. (CRT?!? That's right!)

And here's video link of the g3, for convenience.

Also i got scared that none of the RYZEN's mentioned ECC support, turns out they do. They're not "verified". That means they're not extensively tested like server/workstation chips.
It's totally ok, but if threadripper will go "amazing super duper verified everything!" Then that might be 1 reason to save up more for extra.
I still doubt that i'll use 16 cores efficiently.

I think i've found the case. Azza z 103.
It's like silverstone rvz0X or ml0X under 40€ with hdd cage at front top next to gpu. No mounts for ssd's but they can go in psu area when replacing atx with sfx psu. MSI GTX 770 is 260mm long and the case fits 280mm expansion cars. On the other hand max CPU coolers height is 70 to 80mm, which is thight fit for amd wraith spire cooler. No biggie. And top is solid - making a carrying handle mod easy. https://www.youtube.com/watch?v=7n7j8ADH-Ek

It's been mentioned, but if you're doing stuff with ZFS, I would suggest going with Ryzen or Threadripper because from what I understand, those chips support ECC memory. On Intel, you need a Xeon or an i3 to run it. I don't know if the Ryzen chips have full support for it (they might run ECC memory but without performing ECC, idk if that's how it works), but historically AMD has had much more support for ECC on the consumer side.

Hmm, EPYC comes out june 20th. Threadripper would have higher clockspeeds, but EPYC would have multiple cpu's.
That's a whole lot of pci lanes.