I am a bit confused by the Ryzen document I found. Hope you guys can halp me to get on the right track.

My goal is to have one GPU to run linux and some VMs in it.
I need to passthrough three NICs so I dont have to bride em.
I found one on amazon.de (iocrest si-pex24042 4 Port) that uses a single lane (X1) PCI Express for four NICs.
This will be quite handy for my purpose.

If there will be a capture card w/ 4k I like to add that too, but atm there is none good available. And I think there wont be in the near future.

I would also love to add a NVMe Storage, but before I need to switch the MB I would drop it.

Happy to give more intel if necessary.

I think this is the right vid…

Some Asrock Ryzen fans roaming around

You should be fine in my opinion but I have not look real closely at your config.

When I get it right then the GPUs (PCIe 1x16 or 2x8) communicate with the CPU directly. So does the first M.2 Slot (PCIe x4/SATA). Those 20 PCIe lanes are pretty doable for my GPU and a NVMe Storage. The third PCIe Slot is connected to the x370 Chip which is conneced to the CPU (PCIe x4). 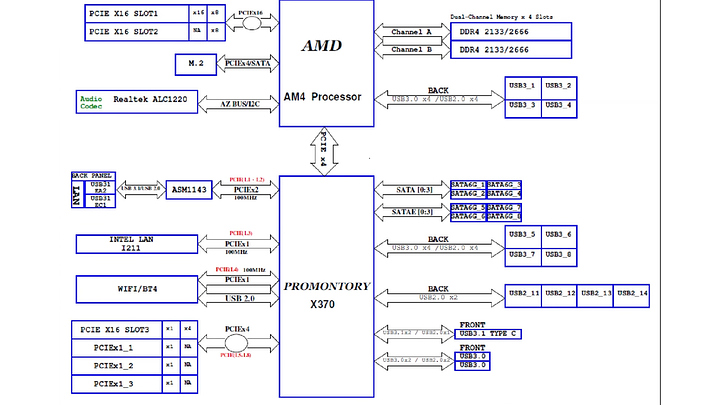 Hope that is right so far.
So I can run the iocrest si-pex24042 Card without any problems.
And the other lanes do not interfere with my NICs then ?
How many PCIe Lanes are left over then?

@wendell you were talking about the IO groups of the GPUs. Hope they are fixed now and we can passthough the second GPU to a VM.