On a daily basis I primarily use a home built Linux system for personal use and I use a Mac for work. On both computers I have nice audio hardware, quality DACs and each has a headphone amp. But Linux easily wins the race in quality of sound and ease of use. The secret sauce is PulseEffects, which I’ve posted about in this forum before. Specifically, the equalizer that works on all sound from around the system, independent of the software creating the sound.

So far I have been unable to find anything like it for Mac. This is for personal enjoyment and I don’t make money with it so I don’t want to pay for expensive ‘professional’ tools. It is Mac so spending money is kind of how the game is played, so I would be willing to spend something, maybe up to $100USD? But only for good quality.

Does anyone know of a system-wide audio equalizer for Mac? Something that is somewhat close to PulseEffects? I’m guessing there’s good stuff out there that I just haven’t run across yet. I hope so. 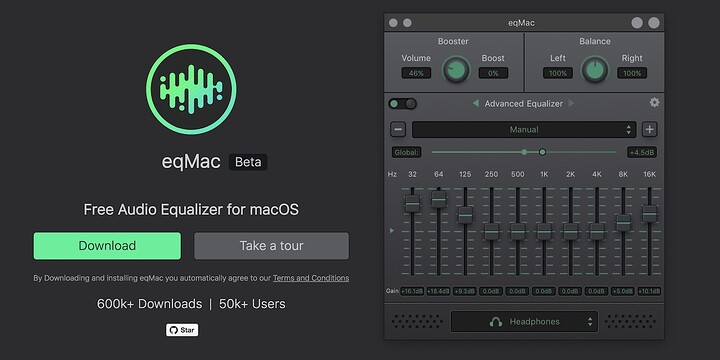 Thank you both for the tip. Unfortunately is hasn’t been the slam dunk I hoped for. It completely crashed once and then created nothing noise. I am suspecting it has something to do with switching between audio sources because it worked as advertised at first, though a little laggy. I’ll continue working with it to see if I can narrow down the problem. If I can get it to work reliably it is exactly what I was looking for.

Jarl, that sounds like a crazy idea. But I have to admit, you have me curious. I could load up a VM and try it there then it will be easy to clean up.

The problems I’m seeing with eqMac cause me to wonder about its foundational underpinnings. Switch audio source; crash. Some audio sources; pure static. Weirdest of all; I was listening to an electronic track and it seemed to raise and lower the pitch of the song over and over. It sounded like when a DJ mixes in a new track and has to mess with the pitch/tune to mix it in - but it kept going. I turned eqMac off and listened to it again; Gone.

It’s a situation where if I had more programming ability and time I’d clone the repo and start working on it. Alas, I don’t possess either thing. Seems like if you could create a translation layer to bridge PulseAudio components to work on top of CoreAudio that might be the best thing. Then you could just use the same tools as you can in Linux. Yeah, there’d be an issue with the graphical presentation too and I’m talking out of my rear end as I have no real clue what would go into that. 10-15 years ago it seemed like that would be a thing that would happen, that you’d just run UNIX apps on Mac OS X but that whole effort has died out it seems. There’s lots of userland stuff from Brew or MacPorts but system level stuff has died out, I assume due to hostility and neglect from Apple.

Congrats, you are learning how to be a real mac user.

CoreAudio has low-latency in mind so if a program relies on a “emulated device” they’re using a driver shim(ktext) like an actual physical audio device, back during the PowerPC era there were a few audio devices from SRS Labs USB surround audio breakout and Creative Labs SB Live PCI–the common reason they failed on a Mac was the under-the-hood changes to CoreAudio from OS to OS broke stuff. Avid typically told Mac users to hold off on OS updates or upgrades back in the day as CoreAudio was a big part of breaking ProTools and their audio/midi gear drivers.

Chances are eqMac may work on older OS releases but is broken on more recent OSes, its likely the pass-thru/bridge API was changed. Part of why Brew or MacPorts has a limited amount of support is Apple changed the licensing of Darwin, UNIX/Linux applications that have the fewest dependencies tend to compile well… yet the lack of being able to compile or have a ISO of Darwin like before for testing makes it harder to troubleshoot.

I’m going to work with eqMac some more and see if I can figure out what it does and doesn’t like. Because I use the computer for work every day and tend to keep SSH sessions and the vpn connected for days at a time, reboots are a bit of an inconvenience. I’ve got an M1 Macbook coming as well so that will be interesting. I’m sure whatever problems I have now will be much worse but we’ll see.

I’m still betting there’s another application that accomplishes the same goal and I just haven’t found it yet. And I could punt and use a hardware equalizer instead. Looks like the global shortages might be affecting that too though. Or I can just get over myself and do without it. It is quite a first world problem for sure. If I can’t get EQ of some sort going I’ll just continue to use my Sennheiser HD 650 that doesn’t need EQ. My HifiMan Anandas are like wearing a concern hall on your head, but only with some EQ to balance the sound right. The 650 is just neutral all the time and doesn’t need it. Doesn’t sound as good either though. Life is so hard! (not really)

…just hit me I could use a VM and just passthrough the DAC. Then I’m back to PulseAudio/PulseEffects which works great. That might work. Pretty clunky but I already run Linux VMs on it so it should be easy to try. If it wasn’t for some work software I’d be on Linux anyway.

Just to close this out, at least for now, I settled on Boom3D for my MacOS system-wide equalizer needs. It is heavier than I need with features I’m unlikely to ever use. But, it is cheap and does the job. The amount of compute it uses is a little bit regrettable. CPU utilization bounces between 15 and 20% anytime audio is being produced, regardless of effects turned on or off within Boom3D. But the good news is it works fine on both Intel and AppleSi and one $12 purchase covers two machines. I don’t know why ‘consumer-grade’ audio software seems to have a universally stupid interface design but Boom3D is plagued with this as well. Everybody seems to think they have to come up with some completely new and novel design language. That’s one area eqMac wins hands down.

Hopefully that helps anyone that happens upon this thread in the future. I would prefer eqMac, still, and after taking a peak at the code I feel less intimidated by it. If I actually get around to learning Swift development I will see if I can contribute. Since the code is complete and the application works I think some more thorough testing and a few tweaks here and there are likely to go a long way for improving reliability.

Thanks, everyone, for the input!