Super simple but I'm proud of it 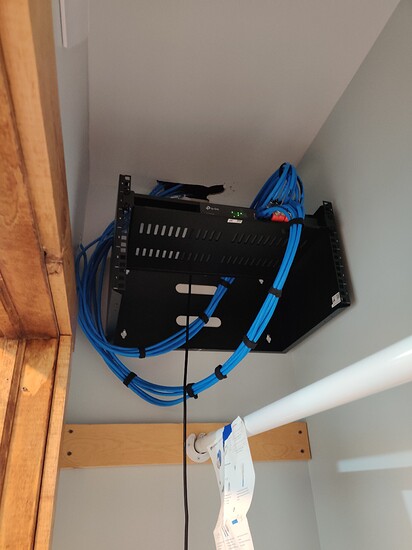 Well done, indeed. You can improve it fairly simple by adding a wire conduit above the rack and keep all wires in there. Probably unseen under normal viewing conditions, but it’ll keep your wires in check, not drooping down

Well done good sir.
Now you need to acquire an edge server/router and put BSD on it

Great job, put an old router on the switch to hide the hole

Well done. If you’re planning on leaving it that way for a long time, you might want to consider using string or wire to support the weight of that front bundle of cables. It’s surprising how much torque a couple of metres of dangling cable can exert on a connector/socket.

I’ll have to figure something out. Maybe a hook and string up front?

As said many times before, support these cables and you good to go!

I’ll have to figure something out. Maybe a hook and string up front?

As a tied bundle of Ethernet cables is pretty stiff you don’t need to support it ‘close to’ the connector (which is what I assume(?) you mean by ‘up front’).

I’d suggest finding the lowest part of the front loop, tying your string at that point, and then going straight up from there until you can find an anchor point. The anchor point doesn’t need to be perfectly above — can be a little bit off. Perhaps one of those unobstructed slots on the shelf just left of the switch?

If you support the bottom of a stiff loop you take weight off the entire length of the loop — including the connector at the end. Also, your knot is less likely to slip because it’s fixed to a horizontal load, as opposed to a vertical one.

WiFi has its advantages, but IMHO nothing beats the simplicity, speed, reliability and security of good old-fashioned Ethernet for home networking.

If you have (or get) a PoE switch, then you can also have wireless access points, radio bridges, IP security cameras, sensors — all sorts of other goodies — on the ends of those cables as well, without having to independently power them. If Ethernet was the cake, PoE would be the icing on top.

Enjoy your wired network — I’m sure it will serve you well for years/decades to come.

What would really clean this up is lowering that 1u shelf that you have your switch sitting on and add a keystone (Female to female no punch-down required) patch panel. This would allow you to plug all of your already terminated cat6a cables into the back of a panel (thus cleaning up the front and hiding the bulk of the wiring) and then you could use short patch cables to go from the panel to the front of the switch instead of having the cables hanging off the ports with the excess weight of everything.