Their reasoning is because of increased transaction fees and high volatility.

Good, the less that people accept cryptocurrencies the sooner AMD gpus will be back on the shelves. lol

edit:YES I know that nobody mines bitcoin on gpus

This is just CYA because government is pushing their big ass into the middle of it.

They have some pretty good reasons: 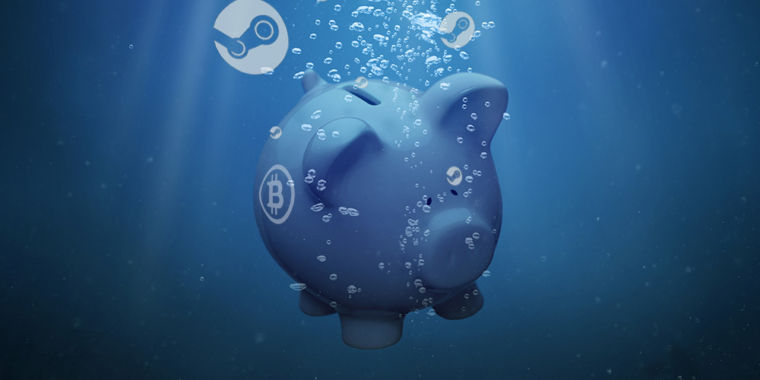 Your Bitcoin is no good here—Steam stops accepting cryptocurrency

Actually probably a good thing. Bitcoin mining is now starting to take up so much power consumption that it is in the order of Terawatt-hours and is rising by 450 Gigawatt-hours per day. This could quickly become a problem.

By design, bitcoin rewards for mining are to hit a break-even point after a certain amount of time. Meaning, that eventually, there will be 0$ of profit, because it will cost as much as it returns, so anyone looking to get into it will just be doing it out the good in their hearts.

This is because the bitcoin block chain is nearing capacity and, as such, bitcoin miners do not always have the capacity to process all the transactions. As such, a ‘fee market’ kicks in and the fees to have your transaction processed quickly increases. This is not unexpected for people who know about bitcoin. Things are quickly moving with ‘layer 2’ solutions such as ‘lightning network’ which will allow cheaper and quicker transactions.

Consider the internet, those of us old enough may remember a time when we could ask our ISPs for a block of IP addresses and no one really cared. Try doing that today! In asia, ISPs can’t even get enough IP addresses. But did internet adoption slow down? No, we just created new layers. People comfortably have 5-20 Internet enabled devices in their home using network address translation.

As already mentioned, you can not mine bitcoin with GPUs at any more. What you actually ‘hate’ altcoins.

Bitcoin uses electricity to secure it’s network. The vast majority of miners are currently located in China, whereby they use local surplus electricity and a discounted rate. So it’s not really a problem right now. Furthermore, mining is an economic model. The more people that mine the higher the difficulty goes (and thus less reward). If electricity becomes scarce, it’s price will go up and less people will mine.

Both of those points are far outweighed by the benefit of having an open, permissionless, global currency. What we have now has so many flaws that are hidden away. Bitcoin can (and I think will) change the world, similar to the way the internet changed the world (yes, of equal importance). If you do not understand why, it’s okay. People did not understand why the internet would change the world either. You can read up about money, how it is created and controlled, if you like. But really, it doesn’t matter. The cat is out of the bag now and it’s not going back and unless you own a bank, you should be very happy about that. Even if you’re do not own any bitcoin.

Why would there be any transaction fees? Bitcoin is supposed to be frictionless.

Without transaction fees there would not be any coins to award the miners who approve all transactions when the 21M bitcoins have been mined. Thus no one would mine then.

Oh ok so lets burn down elecric companies so a made up internet number can tell us we have money. Sure, ok, great.

No. I think bitcoin is stupid. As a concept its good, especially for africa and south america, but its not decentralised anymore, theres no normal stock rate… It seems like the only way it holds value is people’s interest in it. Theres nothing to govern that 14000 dollar price from going down or up. Theres nothing behind it other than people’s word and swearing by it.

I don’t think its legit. And if I’m called a shitty american for it fine. Good for me. But it gives a reason for people to slack off and not push industry forward. You know what all those GPU’s and asic miners could be doing right now? Folding at home. They could be helping cure cancer or at least find ways to play against it but instead they have to fuel some fsawed global economy? Are you kidding me?

Am I salty about not getting a gaming card? No. I have an RX580 and I get to be proud of all the work and testing I did on amdgpu to help get it where it is today. I’m not mad that I can’t have a card. What I’m mad about is a bunch of tards that have too much money fuckitg over everyone else with a currency that is inaccessible to most people because they want more of it. How the hell do you call that a global exchange if you don’t have a reach to everybody?

Somewhere I have 2 btc in a hard drive and I really don’t care. If someone wants it and I find it, great. Take it. I don’t even want to be associated with it. Thinking about all those millions of gpu’s out there that could be on [email protected]? There could quite possibly be a cure for the cancer my uncle died from but instead they’re there to just “find” a currency that doesn’t actually exist.

A lot of the things you say here can be applied to fiat currency. Nothing backs pretty much any currency in existence these days. It used to be gold but not any more. Central banks (some of which are privately owned, such as in the States) literally type numbers into a machine and tada, money is created. This is then given to the government for interest yielding bonds. Yes, private individuals have the power to create money and give it to the government as debt. Meh, I could type for ages but Henry Ford said it succinctly “It is well enough that people of the nation do not understand our banking and monetary system, for if they did, I believe there would be a revolution before tomorrow morning.”

The freedom that this can give back to people in the western world and the economic inclusion this offers to the developed world is priceless. It’s not fake money, it has all the properties required by money. No one can create bitcoins from thin air and in that sense, it is more real than the USD. 97% of which is stored on a central database and only 3% exists as real cash.

I understand that [email protected] is important but so is having bitcoin. It’s hard to see why without ever having lived in a world such as ours, but freedom and inclusion has value and quite literally can improve and save lives.

Anyway, I am going off on one now. Sorry, I can get pretty passionate about this stuff and I feel a nagging urge to educate those who don’t understand it the way I do. Just try to be open minded too

It’s not fake money, it has all the properties required by money. No one can create bitcoins from thin air and in that sense, it is more real than the USD

Central banks (some of which are privately owned, such as in the States) literally type numbers into a machine and tada, money is created.

Meh, I could type for ages but Henry Ford said it succinctly “It is well enough that people of the nation do not understand our banking and monetary system, for if they did, I believe there would be a revolution before tomorrow morning.”

Right, that quote is taken out of context a lot because he was referencing industry. Compared to what money actually used to mean, steel workers should have been paid a lot more than they were. Now its farmers, factory workers, and the few people that work in america-based car assembly plants. The problem I have is with the other 2 listed quotes. Money used to mean something. Here is 500 dollars for those 2 cows and a sheep. It used to have a trade value. But that we don’t have that sort of trade value any more because theres so fucking many of us that stock of food, housing, or just bullshit items that we have like computers and cell phones… It doesn’t mean anything anymore. Like you said, banks just hit a number and tada, money.

I call this ghost cash. Somewhere after 1947 when the huge ramp up of the electronics and automation industry kicked up money fell out of usefulness in the US. Maybe not in other places, but definitely here. With the need of jobs going up, sure you expect something in return, money, and if money was kept to what it is meant for, trade, then I could easily see what the good of it is. Instead what we are seeing money do nowadays is run the US and buy our leaders, keep people quiet, win where democracy has failed. We see the economic crash of 2008 that literally fucked over the planet because corporations and bank conglomerates (5/3, ATT, Comcast, Apple, Microsoft) don’t pay their dues back to support their foundations nor do they do their full services. As such you see our banking structure be a crumbling mess of ripoff and con artists running the work now and you see credit unions pop up everywhere like the banks used to do, and whats to say they don’t do the same in that 50 year span?

Back to bitcoin, what keeps it from doing the same? Hmm? Blockchain trust? That just shows an open ledger, which is nice, but that doesn’t keep from group suppression. That doesn’t keep from governments being bought. Its not like any of that stops anything. And hell take sierra leone fro example again. They can’t just buy a generator so, like I said, they created one out of the whole pile of garbage. They innovated, they succeeded. Thats amazing. Near as I can tell, 20 bucks of bitcoin 2 weeks ago turns into 280 now, or 290, according to someone on the L1 telegram. But thats USD. What person in… IDK lets use an extreme example like North Korea. How does it help them? Or Cuba? Or any of south america? You still have that wall of buying in, and that appears to be the only secure way to get in, and then you have to hope to fuck it doesn’t get stolen anyways, or that the government takes it by force. What about the places that don’t have internet?

I know its high demand to say that not everywhere has internet so bitcoin is useless, but I think that in a couple decades either we’ll be fueled by war and dead, or currency won’t be needed and we’ll be back to the old way of trading that wasn’t uncommon all that long ago. Here’s a cow to bring to slaughter to feed your family, please fix my car. Is that old fashioned? Maybe. But I think its also really stupid to think that a flawed system like currency and market is going to balance out and everything will be great and dandy.