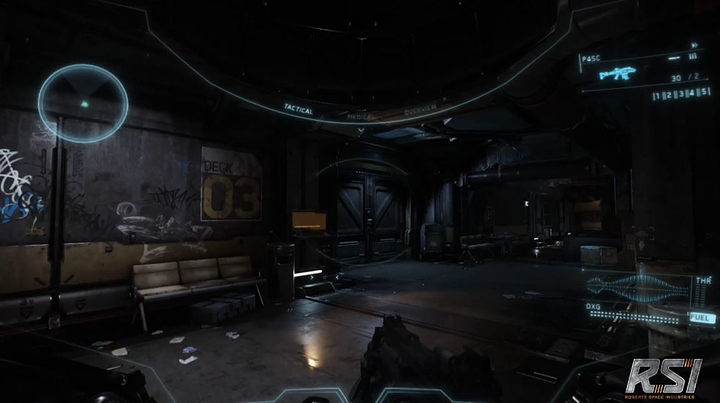 If you're like me you just got up at 5am to watch a twitch stream kill itself on Australian internet. I think there was more down time than actual up time. But what was shown was Awesome!

Star Citizen has FPS? WHAT?! - yep! A lot of the core users have known this for a long time but many people new to the game are just hearing about it. CIG last said that you can expect 70% space flight/combat and 30% actual FPS in the game

The FPS module will available to play soontm , Or in few months as things get polished up and more intuitive like the animation and free float mechanics.

There's been a running joke that [REDACTED] has been making the FPS module, but with this new demo we can meet the team at... ILLFONIC, they're a (newish) company that has a history in cryengine development, and has worked with AMD on many techdemos such as ruby.

I don't know about you guys But I am heavily looking forward to this. I've been waiting for an imersive tactical FPS. I guess I've never been good at quake or anything fast-pace.

The FPS demo reminds me of a small indie game that never really got off the ground called Interstellar marines, as it shares a similar desire for immersion with where the bullets go where the gun is and similar helmet breathing mechanics so on and so on.

How hyped are you guys for this?!

in other news- ArCom v.9.2 is out, and features a new aim mechanic and a deeply needed hotas/gamepad buff.

Watching this video it felt like the gun play was quite horrible making it fairly painful to watch I also picked up on the movements of the characters not being very fluent but if they sort these things out and maybe add a little bit more atmosphere as it is in interstellar marines then I will be completely sold.

But I'm also trying not to get very hyped over this game since the release is faaaaaaaaaaaaaar away :/

In the twitch stream achieve if you watched that one... Chris said most things are place holders. Including charterer animations. This will be replaced with an upcoming mo-cap shoot.

And expect things to change even more once we get it in our hands as this is part of the development process.

I'm excited that it's all coming together.All parts of the game.

Do the suits supposedly have some sort of RCS for zero-gee combat?  They just didn't look like they had realistic movement (effortless navigation, no noticeable effect from recoil).  I know it's basically all placeholder stuff, but I'm hoping it'll be more realistic (i.e., really difficult) in the end.

(Also didn't like how the gravity shut off—no gravity doesn't mean everything will suddenly fly up off the floor.  : )

all stuff is placeholder and in pre-pre-alpha. Expect it to be one of the most realistic games. They have the money and ambition to do so.

Maybe the artificial gravity system has a side-effect breif repel when it shuts off. or gravity causes things to compress when held against, and that tension release, ok these are both satire but that last one is real on a very negligible scale. I'm sure it's for visualizing the effect in video games, as IRL this wouldn't happen but you'd be able to feel it. Awareness compensation?

Seen the Demo. Knew it was going to be rough and scripted but I enjoyed it know that everything were just placeholders for now. Have you guys read the AMA from the FPS team on reddit? if not, click HERE.

Tangent Note: Interstellar Marines is still in development and early access on Steam, but gets constant updates and always communicate with its player base. It is not a full game yet. Did not know they had a Kickstarter though.

That was a fun AMA and I'm glad they did it.

heh, I actually found out about IM from another TS blog post back in the day. I havn't payed much attention to it these past months because they're unfortunately underfunded/staffed. I wonder what would come of their ideas if they merged with illfonic for the SC-FPS

any news on if there will be any sort of arcade style pvp in the FPS element? or is it simply missions/boarding ships and the like?

If they are going to transcend the FPS Genre, I really want them to take their time with it. I can wait till 2016-17. Just keep up with the transparency. Man, I am going to go to play a stealthy sabotage to any ship I want to scavenge.

It would be silly if they didn't.

Arena commander is the in-game space fighter along side the PU which is the main game. I full expect an in-game fps mode to play deathmatches.

Animations looked a bit clunky... but yea this is pre alpha so its to be expected.

I just hope that they do not do the same thing as so many game designers do. Have all the environments be warehouses or inside some industrial compounds .... just more metal pipes and narrow hallways.

Would be cool to see some asteroid environments where you could use the lack of gravity against your opponent... like explode something beneath him and shoot him into outer-space.... or something like that.

considering you will be able to (you can now) get out of your space ship to salvage things and take a space walk I see no reason for a sleeper pirate to be waiting in a wreck with a shotgun pinned against the door.

I think you are correct on how this will play out. Aside from the PU, there is the single player Campaign, which kind of takes place along side the PU, it will be interesting how that unfolds. If it's total stand alone gameplay, or if it will somehow be integrated into the PU with a somewhat Linear game play.

As for Arena Commander, I believe Chris Roberts described it as an "In-game Simulation game similar to the simulators in all the Wing Commander games"