Spring Break Project - Moving my media to a server

In my week off from college (minus one hour, thanks DST), I decided I would make some changes to my server. Initially, it was only set up for distributed builds. However, at the moment, I'm not compiling large projects on a regular basis, so it's just been sitting on a table gathering dust. Thus, I decided to copy all of my media to the server and allow access to it over the internet.

This entailed a couple of changes. First, I modified my "case" so that it could stand on its side. I've attached a picture of it below. Isn't it stylish? 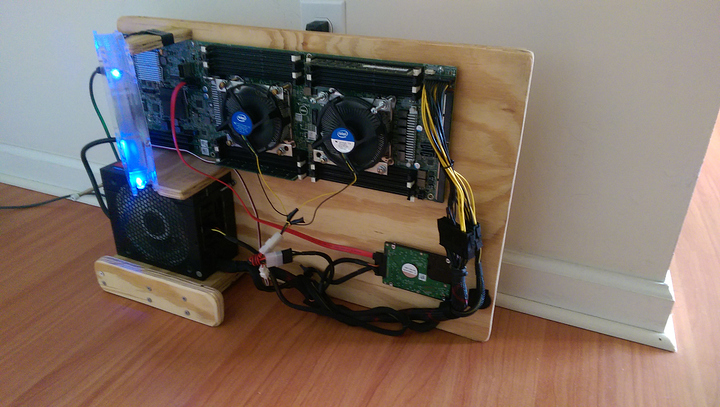 Next, I ditched Fedora for Arch as the OS. The documentation for Arch is very useful when you have little to no idea what you are doing. I was concerned about security, so I implemented quite a few of the practices described on the Arch wiki page regarding that. I won't mention which because I'm paranoid. I also opened the ports I needed to access it remotely.

Perhaps the most frustrating part of the process was figuring out how I would access my media. SFTP seemed relatively simple to set up. However, when I tried to get it working with Kodi, I ran into difficulties. Everything worked fine over a wired connection, but it would not work over wifi for some reason. In the end, I made a script I can use to mount the the drive using sshfs. I gave the location of the mounted drive to Kodi, and it works over wifi now.

I still need to test it remotely, though it should work in theory. The only real downside to my setup is that currently, it won't work on my phone. If anyone has an idea for that, let me know! Now I need to figure out how to spend the remainder of my sping break...