I'm still rocking an old 6970 card with the reference blower cooler.I don't want to buy a new card as this card still has enough power for me. However, it does sound quite alot even in idle. I have of course tried setting a low fan curve, but these cards get so hot so it ramps up anyway. I got good airflow in my case and I have even attached an 120mm fan to the side of the card to cool it even more, but it doesn't do much.

The other day I took out my gpu and removed the shroud to take a look at the heatsink. The sink's channel are in the direction of the gpu fan, so attaching a fan directly to the heatsink wouldn't do much as the air has nowhere to go.
it looks like this: http://www.techradar.com/news/computing-components/graphics-cards/how-to-upgrade-your-graphics-card-cooling-954497

It is possible to "split" the heatsink apart. If I did this, replaced the thermal paste and attached a noctua fan directly to the heatsink, do you think it would work? I don't mind it sounding a bit when playing games, but when I surf or program, I just want it to be dead quiet, Has anyone else done this? I cannot seem to find anything about this.

Interesting that your card gets hot enough to ramp up so fast.

I think you should try situating a fan directly behind the card and have it blow air across it rather than tear it apart and try to force air into the finstack. You won't help cooling by ruining the radial fan's effects.

Here's a picture of how it looks(sorry for potato camera): 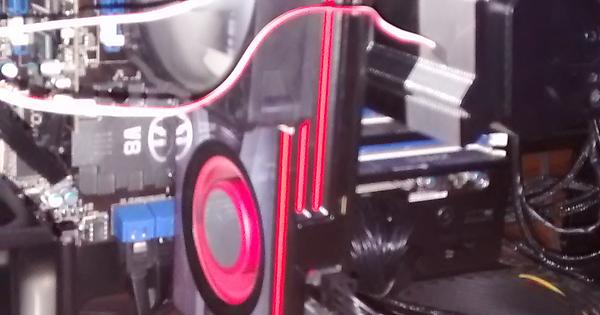 As you can see the bottom ap fan is blowing air all around the card,

But as I said, I don't care about the sound when gaming, only idling is important.

Well that center fan should be on max, and if you're still idling at 55 it's time to remove the heatsink in its entirety and reapply thermal paste. I crammed three of those cards together and even the middle card was only idling at 43C.

Also that extra fan isn't doing much for the card by being on the plastic. You would want it blowing across the PCB.

You should probably just replace the paste and you'd be fine, otherwise you could ghetto rig a 120mm cooler to it

Yeah, I've even lowerd the ap fans with a fan controller, so they are just around 550 rpm.

The fan on the shroud, doesn't do much, that's true, but it actually lowerd the temperature a few degrees.

Increase the right side AP fan speed to 800RPM at least. It'll help clear the hot zone between the GPU PCB and the CPU heatsink.

For 10 euros it's quite a nice price. I looked around and found out that it could disipate 240w of heat, don't know what the 6970 uses though. It probably doesn't fit either, but I guess I could mod it.

Honestly your card should idle at 35C with only 33-37% fan speed, at worst. Your load should be around 76C with a fan curve up to 65%. If you get anywhere near those numbers consider it a victory and enjoy the card for as long as it lives.

Ok, then I will probably have to live with it. At 0% gpu usage and fan speed of 35% it stays steady on 47 degrees,

Well when you replace the thermal paste report back. I'm interested to hear if it really was that degraded.

Another trick to try if you're feeling brave is to use MSI Afterburner to drop your voltage to 1.135v. Could cool the card, but could also introduce instability under load.

Well, stock voltaget is at 1.1v on my card, but yes, I could try and underclock a bit.

Yeah, replace the thermal paste. If it doesn't help much then consider lowering the voltage of the card.
If you haven't replaced the thermal paste before this then.. Since often the factory applied thermal paste is either of poor quality or there's way too much.

And since it's 4-5 year old card, well, it's well due past the time to do some maintenance to the cooler.
Since you have removed the shroud, was there any dust? Did you clean the heatsink? Might wanna consider doing that also.
Compressed air does the trick. Compressor, bottled air, gas station tire pump?

Although, that might be an interesting solution.
To attach something like that outside the case to pull air through the GPU, leaving the shroud in place and GPU controlling the outside fan. Might even leave the blower fan running on some inaudible speed to help the process.
But it would stick so far out that in my case it wouldn't be practical. Would be fun to try though.

I got a compressor and I have cleaned the card alot of times. Although it's usually enough to rack up the fan to 100% and the dust comes flying. I have never replaced the thermal paste though, so it's probably time for that. I know that attaching a fan won't do much. But as the topic states, if I were to split the heatsink, I would be able to push air on top of it and making the air escape at the sides.

Not sure if you know but the 6970 idle temps are around 40c and safe load temps under 85c. I think they can go has high as 100c. Hence those fire 290x memes. They operate like a vaccum cleaner and suck in from inside the case and exhaust the hot heatsink on the gpu outside of the case.

So just wondering if you sealed the area around the 120mm? Also wouldn't it also negate the stock AMD fan? I've done aerocooler shrouds in the past. The reason why they get 5-20c lower temps is because it removes the shroud that holds a bit of the residual heat when at load and cools slowly. Also i think they come with vrm and memory heatsink you can use sticky tape or expoxy which also cools the card a few more degrees.

What would be better is you install the arctic accelero xtreme, then de-clip the tri fans. Install some 100+ CFM 120mm fans with either zip tiles or something and you get better results.

Or if you're really daring try this:

So this was awkward... I changed Thermal compound for an hour ago and now I got way worse temps. About 70 i idle.

I'm fearing that I didn't manage to tighten the GPU bracket enough. It was very tight and difficult to scew off. But then when I attached it again, I couldn't screw them in the whole way, that's probably why. Will try to tighten them a bit more. I believe I used enough thermal compound, about the size of a cooked rice corn.

In the meantime, here are some pictures showing the old paste (doesn't look very good):