Sparks flew! Is the culprit the PSU or UPS?

I had just finished a system transplant to a new case when the problems started. I got the 011 air for the project: to water cool my 5950x and shiny new RTX 3090. Along with the case, I got a new PSU (Be Quiet 1500W) as my old one didn’t seem to keep up (loading 3D apps caused shutdowns).

I managed to get some testing done with the components in the new case and then my OS started to throw boot errors. I tried recovering and was in the process of checking my ram when I flipped the PSU switch and saw sparks. So, heart racing, I flipped it back and began franticly unplugging everything while my UPS played a long single beep adding the doomsday feeling of the situation.

I can’t help but worry that everything got toasted. Not a good day.

The UPS showed the error F02 (on battery short) and as my pc and UPS are right next to each other and the spark was so brief, there is the potential that it came from it instead of the PC PSU. This theory seems to be somewhat supported by the fact that the UPS continues to throw the error after a reset and with all of the outlets disconnected. Im just guessing and trying to stay optimistic.

So, if anyone has any experiance with broken UPS’s, PSU shorts, or ansers the the questions that are causing me to worry I would appreciate it.

If you don’t have one already, get yourself a PSU tester (something like this axGear Power Supply Tester PC Computer LCD 20/24 Pin 4 PSU ATX BTX ITX SATA HDD Digital : Amazon.ca: Electronics). If any of the rails are shorted or incorrect voltages you’ll see it pretty quickly. You can use a jumper or paperclip and a multimeter to do this too.

If the UPS is still reporting an error after a reset, it’s probably blown a fuse, but it could also be that the new PSU put a higher than normal load on the UPS and something was just ready to pop. I’ve had UPSs literately go bang on me (brown trousers time for sure), but the PSU and components were just fine.

I would start with the PSU tester and go from there. If the PSU shows all good then start plugging in the bare minimum to boot.

Had a psu go up in smoke after replacing the mobo!

You can’t just run a PSU by itself, it needs a load connected. PSU testers have a big resistor inside to generate enough load for it to turn-on and run.

I’s most likely the rest of your system wasn’t damaged by a PSU or UPS fault. The PSU generally absorbs the brunt of the damage. Of course there are exceptions.

It’s entirely possible to run PSU without any load, just jump pins 4 & 5 with a paperclip and it will turn on. Simple PSU testers that display a voltage output produce no load, they just short the pins

Can confirm, do this all the time, if you have a custom water cooling loop they also include a jumper

Thanks for the input everyone. It was a brown pants moment for sure, but with some of the experiences you’ve shared, I’ve started to calm down.

I have a jumper for testing custom loops, but I opted to get a PSU tester. It seemed easier and safer than figuring out what pins to test with a multi-meter. 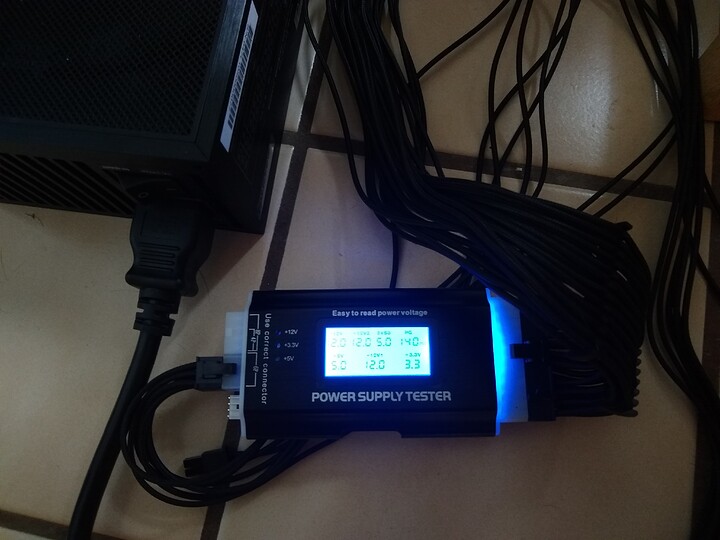 The PSU tester read the voltages as dead-on for every connection. It consistently read the PG value at130 or 140 and seem to read that as a fault as the tester continued to beep and flash that value for the whole test. 130-140 seems to be in the normal range of 100-500 and the PSU tester documentation also mentions that range as nominal.

Should I be worried about that PG value or my tester being defective reading 140PG as a fault?

I’m starting to have some hope that the short was isolated to the UPS and as I couldn’t tell where the spark came from initially, it’s quite a relief.

I have yet to hear back from APC about the UPS. It’s somewhat concerning to have it fail with a spark and after just under a year of use. Especially as it has only gone on battery a handful of times.

The UPS in question is an APC UPS pro VA1500s. In normal use, its loaded around 50% and in rarer heavy loads it’s somewhere in the 75-85% range (hard to tell with the 5 bar load meter). On the UPS LCD, I often saw the AC voltage drop to 118, or even 110 on occasion. So I wonder if the AVR function of the UPS (voltage compensation) had something to do with its untimely failure.

Probably the UPS. To make a spark you need some hefty amperage and the batteries are the likely ones to accomplish that.

I’d pop the battery out and give it a lookover and then put a meter on the output to see if it still reads as charged.

Then without putting the battery back in I’d plug a 60W light bulb into one of the UPS outputs as a dummy load and see if the UPS can still power the outlets off the direct mains.

Then reinstall the battery and repeat the test. If the lamp still lights pull the UPS plug and see if the light still lights and then put a meter on one of the unused outlets and see if you are still getting nominal 115AC output.

For testing the PC power supply, use your PowerGood shorting plug to enable P/S outputs and measure the +12V, +5V and +3.3V outputs on the 24 pin connector. If they all are good, then plug in some kind of load like a fan or pump to a Molex connector from the power supply and see if it runs. That should put at least a little bit of load on the power supply. After that you will have to try and power up a lot bigger load like the motherboard.

Some PSUs need some load on the 12 V rails for the 3,3 V rail to output the correct voltage.

not so much on the 12 volt rail but on the 5 volt rail (minimum 5 ohm 5 watt)
most ups have an overload fuse to protect the internal circuitry in the event of a catastrophic short circuit.
smaller personal units may not have them.
generally battery failure issues in those units result in them being discarded/recycled and new ups units are purchased to replace them.
battery prices are hefty enough that many people dont want to risk the cost in the event the ups is actually bad.

in any event chose your ups based on 125% rule
1600 watt max load wants a 2000 watt unit
a little overkill maybe but overall dependable battery life will be greatly extended.