So I found an old EVGA 9800 GTX+ V2 at work and decided to bring it home and compare it with the rest of my DX10 GPU collection.

I ran Heaven 3.0 on DX10 Ultra preset, 1024x1280. Overclocking was done with MSI Afterburner. No voltage adjustments were made, as that feature was locked on this particular card. I've set it up against every running DX10 and DX11 card that I have sitting around, just for comparison sake.

Here are the results of the testing: 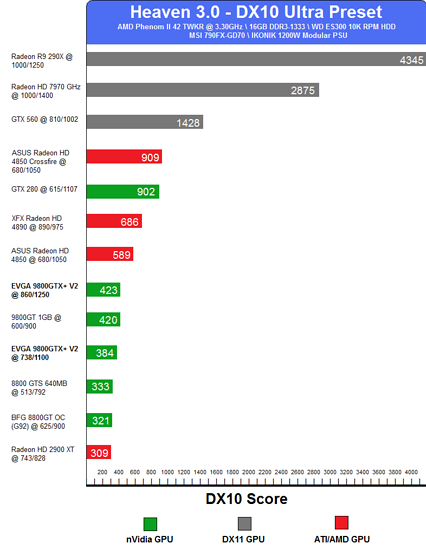 Obviously if I had run all these cards on a test that used less than 512MB I'd see a bit more deviation in scores, but I wanted to see what they could achieve under the maximum stress. Most of these are flagship cards from their respective generations, so they were marketed to perform at the maximum.

If you want to see more, I can always put them back in and run some other tests. I just like how quickly and easily Heaven is to run, and it does give a decent comparison and really shows the advantages of lots of VRAM on a GPU.