Of course, we’re more interested in IOMMU improvements, but this is a nice “bug” introduced by the AGESA on MSI motherboards.

I wonder if this is something other BIOSs can be modified to include, could they reverse engineer the MSi one?

cliffnotes for people not wanting to stream/watch video at work? 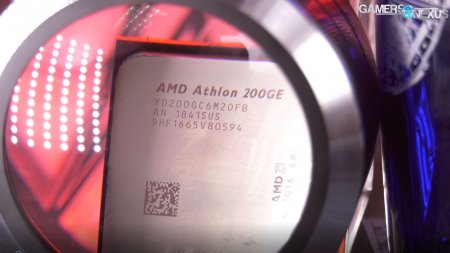 The AMD Athlon 200GE CPU enters our benchmarking charts today, but we’re reviewing this one with a twist: For this benchmark, we’re testing the CPU entirely as a CPU, ignoring its integrated graphics out of curiosity to see how the $55 part does when...

The Athlon 200GE is a $55 2c/4t CPU with Vega graphics as it’s integrated graphics. It is supposed to be a locked CPU (no overclocking allowed), and for Asus, Gigabyte, and AsRock this is true. However, the MSI B350 Tomahawk board is able to overclock this CPU. This presents a unique position for this CPU as a possible replacement for where the Intel Pentium G4560/G5600 was at as an extremely budget constrain gaming PC. If you’re looking for a dirt cheap CPU for gaming that will be paired with a dedicated GPU, then this is a decent choice over the more expensive G5600 as it is significantly cheaper. Since the G5600 is around $100 at current, you’d be better off with a Ryzen 1200 and dedicated GPU, or possibly a Ryzen 2200G depending on the games played.