back when pascal was unreleased and in the early days one of the most talked about features was Simultaneous Multi-Projection. this new magic technology that gave you a 50% frame boost and fixed surround by correcting the 3d image so you could use up to 16 seperate screens as a single big one. 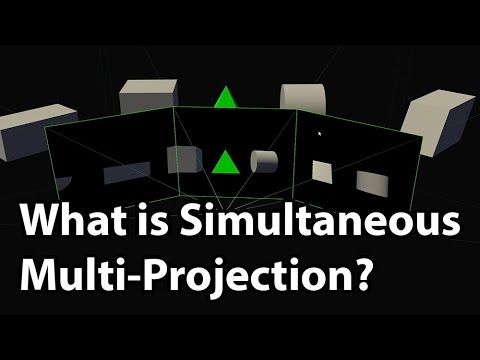 it's the end of February nearing a year since it was announced and advertised and nothing. i bought their card and multiple monitors and i cant use the technology. at what point is this false advertising? does anyone have some insight into whats going on?

at what point is this false advertising?

Probably very far from it. It is a feature within a GPU and drivers that makes some optimization into the multiple view windows calculations. You need to have a software like a VR game that is actually using that feature.
Most likely the same goes for SMP use with three monitors - that it is a game that need actively to use that feature.

I think it comes down to Nvidia make an Nvidia only features and companies decide to make software that is coded so it can run on any 3D GPU.

No one uses the feature it's on Nvidia not developers trying to sell games.

Nvidia and false advertising? Nooooo, that will never happen, oh wait...
Now, stupidity aside, this is like PhysX and GameWorks and everything else. The card still supports it, but the game also needs to support it. And as far as i know, game devs are more worried optimizing for 30 million AMD consoles, than a few thousand multimonitor Nvidia setups. It's not about AMD vs Nvidia, it's about market and selling copies. And if Nvidia had hardware in the consoles, like back in the day with the PS3, devs may had to optimize for it. As it stand - they don't need to.
Nvidia also talked about the ingame photography feature, that was actually much better selling point, because immediately there were a few games with that feature implemented.
At least that is the way i understand all those technologies...

No, what I'm telling is that NVIDIA advertises their hardware possibilities, that could be used by the game developers.
It is developers choice of using it. Similar situation like with DX12 adoption.

Also just to add. Nvidia may have market share on desktop PC hardware. BUT, SMP is only a 10's series feature which is a small sub-section of nvidia gamers. I was on a GTX670 untill mid 2016.

a small sub-section of nvidia gamers

With that, it's restricted to only those, gamingon desktop, not laptops, and from those, only the ones, gaming on multiple monitors... So it's basically a niche of a niche of an niche of the market...

@jak_ub if nvidia put any effort into it smt would be in games. they advertised it as a feature of the hardware they made billions off of it's on them to put up not the devs.

I know, but my point was, that it immediately had support. SMP did not, and obviously still don't.

it's on them to put up not the devs.

They can't force the devs. If i am Ubisoft, i will not agree to optimize for that small of an audience. Gameworksd is working an all 70% PC market... SMP does not. And Ubisoft and Arkham games already gave Nvidia's technologies a bad name. If they had to optimize for more niche tech and ignore even more QA... We all know Arkham Knight and AC Unity and all others...

The dev came forward to state that this was fixed. The dev posted this on their facebook:

"Update and conclusion on the Ansel thing: I talked with some guys from Nvidia and especially the lead developer of Ansel, it's all sorted out. It was a result of some testing, basically leftover code; the next Ansel update will have some code removed and me credited, so it's all fine now. I have seen that someone posted this on reddit, probably in an attempt to start a storm or something, don't do that. It's not a big thing really and Ansel is no commercial product so case closed then"

SMP as a technology is great in theory but does require game devs to implement it, alike Gameworks or AMD TressFX.

That is the first I have heard of that. Mod'ers code is not really released under any licence ? A bit like when steam was going to charge for Skyrim mods and profit more than the mod makers (I forget the steam / mod split now).
Off topic but interesting.

steam survey says 8.35% of gpus are pascal as of January with 31.51% multi monitor. and im pretty sure this also works with all vr too. and they can bundle it with gameworks and other software and do the heavy lifting so the game company's can easily implement it, then pressure/make it worth their time.

if im ubisoft and nvidia makes it very very easy to implement this and it will bring me more sales then why wouldnt i do it?

@TheCaveman thanks i dont use fb this is news to me.

So make a game and if my math is correct code it for 2.6% of the market to be SMP stable / tested and supported ?

it will bring me more sales

Well, my guess is it isn't very very easy, and i am not really tempted to buy Hitman just because it will outperform GTX960 on my R9 270X... I just don't like Hitman. My point being sales based on new technology are not guaranteed...

It's the same thing with the AMD APUs and the HSA technology. If properly utilized, the APUs are outperforming Inte's i5 4000 series... There is no software, that properly uses HSA... So nobody cares...Amazing technology. Nothing uses it.

SMP as a technology is great in theory but does require game devs to implement it, alike Gameworks or AMD TressFX.

It requires code to support it but Nvidia did say it was very easy to code. They said something like a handful of lines of code to implement in the launch. This is from my memory only...been a while since I watched the launch video.

That was Ansel, with the few lines of code. Not the SMP...

That was Ansel, with the few lines of code. Not the SMP...

they advertised it as a feature of the hardware they made billions off of it's on them to put up not the devs.

And as with all hardware capabilities it is the software that must use it.
Look at GPU as a car engine. If you bought an engine you cannot say that the engine factory is
responsible for building a car with a wheel, gearbox, and everything. You need to go for that to the car company. Then again if you bought a car, you cannot expect that there will be a human driver that will be driving it for you - for that there is a taxi company. And similar division of labor is in game industry - even on consoles.