After seeing a few posts asking about DIY amplifier stuff I decided to start a thread about an amplifier I'm making.

Main reason I decided to build this amplifier was that I came across a broken down radio receiver from the late 60s that I decided to salvage components from, 2 pairs of germanium power transistors were in the amplifier stage so I decided to reuse them. 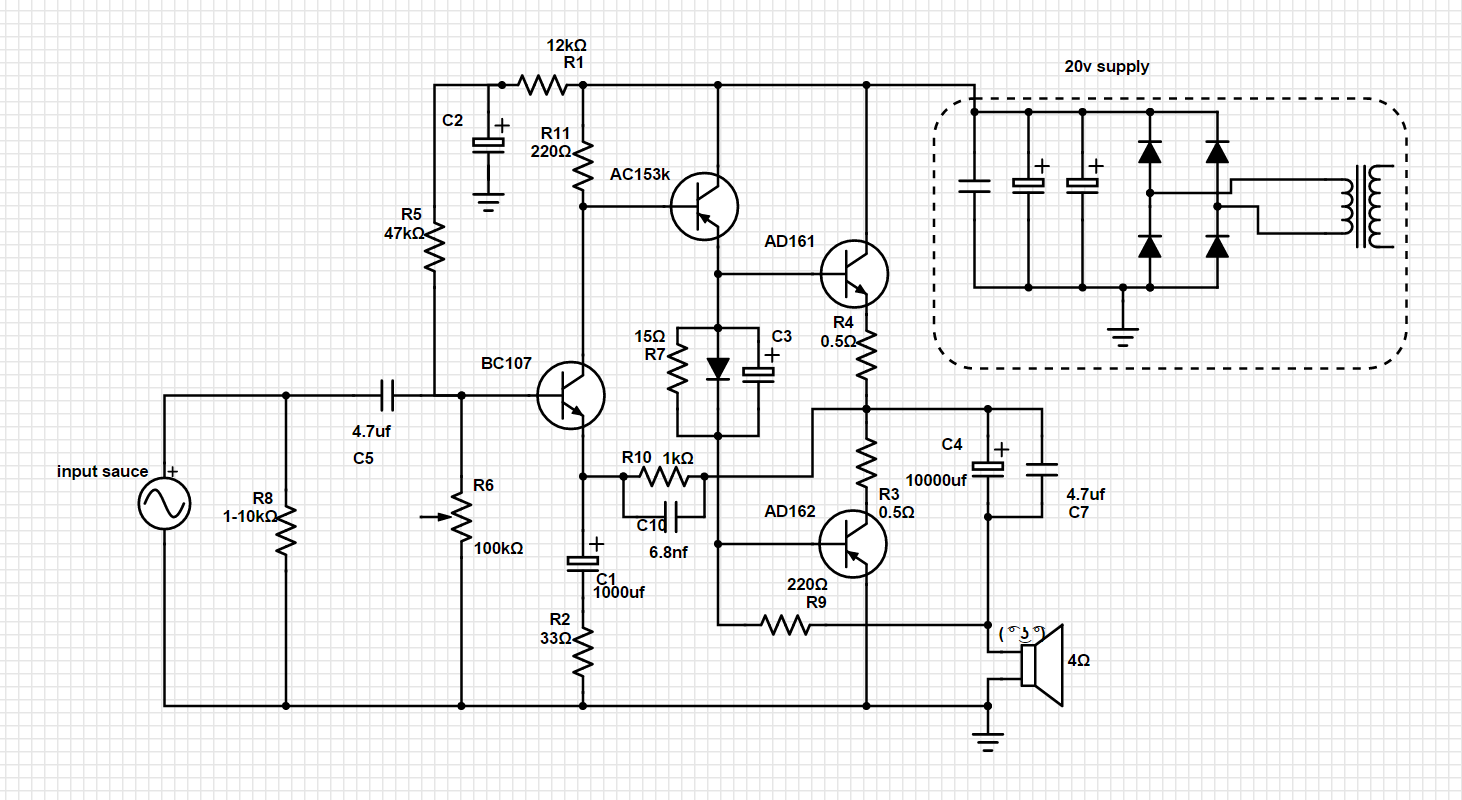 Very crude design but I found it surprisingly good sounding, clipping it on the scope it looks more like a tube amplifier than a modern solid state amplifier, which is a bit interesting.

Transistors can probably be replaced with silicon transistors with similar gain though all the transistors shown can be found on ebay.

I like how the power supply is plain and simple. Usually fancy regulated power supplies sound a bit too synthetic.

I still do not get where you would find such a high value capacitor. The only ones I find are made for something unrelated to audio.

What capacitors are you talking about?
The power supply is really simplified, I'm using many more capacitors than what I have shown, actually I'm using 10 dublier 10000uf 25v capacitors for the filtering (really overkill, though they're pretty cheap)

The speaker coupling capacitor, C4 can be about 2000uf and up, lower than that the bass response starts to suffer.

I thought you were dealing with 1f capacitors.

But yeah, this is interesting.

I am really torn on what I want to do. I currently have Snell J3s, and I like them a lot, but I want smoother and silkier highs.

I have dicked around with actually putting the snells on their side and putting some magnepan speakers on top and use them as a mid range and tweeter driver to complement the bass driver in the snells.

But in order to make that work well, I need like 50 watts per channel or something crazy like that.

OR I need to get a really good ribbon tweeter for the snells and redo the crossover to accommodate for it.

Sell them and get larger speakers~
I doubt that you're going to get what you want from ribbon tweeters, they tend to be much sharper than the dome tweeters your speakers have.
Bad ribbon speakers are often harsh even.

I have to change out the surround on my woofers, foam starting to disintegrate, old speakers, the struggle is real.

The ribbon tweeters on the martin logan 15s are damn near perfect. But I would like something a little better.

Someone told me that later this year, they will be showing off some ribbon tweeters at capitol audio fest. So we will see.

And actually if I decide to go full ham, I would probably get some jensen A12s and then make the power supply and clean them up.

Then I would have to make my own Western electric horns.

what is the function of the c7 capacitor ?
and I have a 10v 10000uf german capacitor. can i use them? Will the voltage stay low?

Function of C7 is a smaller capacitor that behaves better with audio frequencies, higher frequencies and such. “Improve sound quality”

10V 10000uf is a bit low voltage for this application, better to have higher voltage.