I was playing the waiting game, expecting to see affordable 2TB SSDs right around now, but since such are nowhere to be seen and the prices are actually increasing or stagnating atm, I'm now searching for an ultra silent 2TB+ HDD to replace my current 2TB WD Black. I have a custom loop and that drive is really the only thing left that makes any significant noise (it vibrates like hell).

I got a 3TB WD Red a while back and have it running in an external enclosur. It seems to be fairly quiet, but I was wondering if there was something better out there? Also, what do you think about a large capacity 2.5" disk as a replacement? I'm not sure about the performance and reliability of these pocket drives.

The vibration noise that you are talking about, it is coming from the drive itself or is it coming from the drive vibrating against the case/hdd cage/ whatever? If the drive itself is making a vibrating noise, I would assume that it is going to fail soon or something as they shouldn't make noises like that. What is more likely the cause is the hdd is vibrating against something. That is a much easier fix/doesn't require a new drive. It is possible that a new/different drive would not vibrate as much, but I wouldn't really bother. What I would try to do is to add a lot of vibration dampening. It really depends on how your hdd is held into place, but on mine, there are screws that hold it to a metal frame which slots into the cage. If you have something similar, then you could try getting some o-rings from a hardware store and put them between the drive and the frame. Mine is actually built with that already in place, stock. Doing that might keep it from being able to fit into the cage though, so it really just has to do with how everything is set up. Basically, ghetto rig it so that it doesn't vibrate against the case any more.Get creative, but don't forget that hdds get hot, so you can't just wrap it in a cloth or something. It might overheat then.

Anyway, best of luck with that.

Thanks, but my drive is already decoupled (see below) and I can't resp. don't want to do anything more fancy than that in my case. Maybe it's a monday drive, I dunno, but from what I've heard, the 2TB WD Blacks are louder in general, simply because they are performance oriented drives. 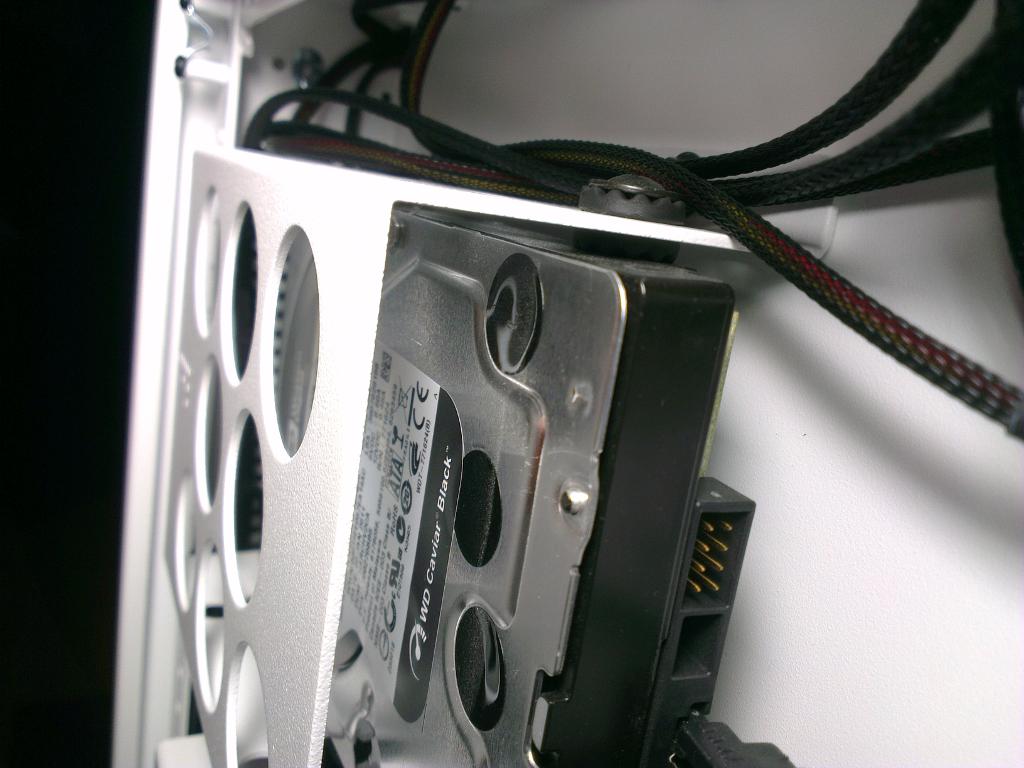 you don't know loud until you have an old 1 TB Hitachi drive. 60 read, 55 write, clicking and whirring like its trying to commit suicide, but has been going strong for almost 2 years...and thats after I bought it refurbed off ebay.

You could Raid 5 three 512mb SSDs if it bugs you enough.

I use laptop drives with a piece of foam on the bottom , 2 500gb or more in raid are good to get equivalent speed to a desktop drive , and you can go up to 750gb per drive no problem .

That would only amount to 1TB though, right? Also too expensive and too much hassle for me, and I don't have the slots to spare anyway.

These are my hdds. Three 3tb Seagates. I just felt them and there is a little vibration going on with them, but nothing that you can hear over any of the case/case/gpu fans. Then again, my Arc mini has the rubber vibration absorbers that I mentioned earlier. You could try grabbing an hdd like the ones I have (3tb for ~$100) and see if that solves your problem as you might just have a bad drive. However, I am expecting that the problem is at least partly due to the lack of dampening in your case. Slower rpm drives should theoretically vibrate less, so you could try that.

EDIT: Forgot to add the picture of my drives.

i got multiple black, multiple blue, and a lot of red running here the only one you can ear is my old raptor but it's 10 years old and i only keep because of it insane reliability

I am using a WD 2tb Green and it is basically silent.  It is not the fastest thing but it gets the job done.  I also use a 64gb ssd with intel srt as a cache so that helps.  I use the rubber mounting hardware that came with my Node 304 to reduce vibration.  The WD Reds are like the same thing but slightly better so I would stick with that.

Why do you say up to 750GB, doesn't it depend on the platter size? Which drives do you have experience with and is the foam thing necessary?