If I replace the fans in my 2u server, 80mm fans, should I use flow optimized or pressure optimized fans?
2 are in the middle and one is in the rear.
Thanks!!

Might want to have a quick look at the CFPM of the ones you are removing to get an idea of how much of a cut you will have by going for quiet fans; A lot of server components are designed with passiver heatsinks which rely on a unified flow of air through the case. 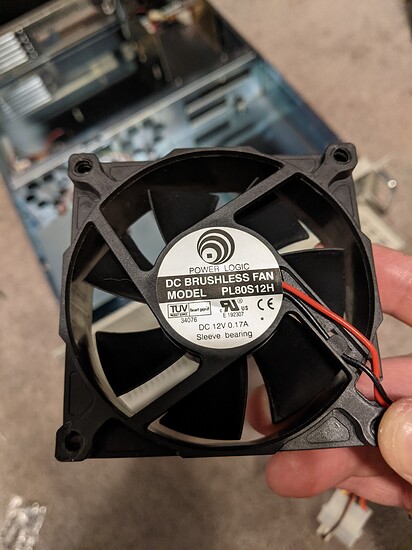 I cant find any info on it. It just seems like a cheap old fan… idk

I don’t know what kind of components you’re cooling, or if you’re able to put this thing somewhere out of sight, but considering this is a server, then when in doubt about airflow more is better.

In my experience of replacing fans in short-depth 1U/2U servers you’ll want a flow optimized fan but the RPM needs to be fairly high or some pre-fab servers/server mobos will complain about them in the BIOS. If your case was one of those “NewEgg” Rosewill or others, they’re typically a custom fan supplier. Most pre-fab servers use Delta or Vantec as they tend to last very long and typically don’t become noisy as they’re louder than average high-RPM consumer PC case fans.

Personally I wouldn’t recommend Arctic Cooling on a server, the CFM may not be enough for a passive heatsink of a server–if you have a normal HSF, it wouldn’t be an issue.

I have a very old 2u box from Craigslist, it came with a PCI riser card!! I’m not sure how well it will do. I guess I’ll leave the stock fans for now and see how it performs and sounds. Below is the CPU cooler I was planning to use. Would this be sufficient for a xeon e3-1220-v2?