Havnt been on this forum in a good long while, anyway

All over the internet, everyone says that if you have your secondary Nvidia GPU dedicated to PhysX, The GPU's Video outputs are disabled since the GPU is only being used for PhysX Calculations. Also seems most of this is severely outdated information. This led me to not use the outputs on said card.

Well, I decided to plug the w2207 into the card that is currently being dedicated to physX and Voila, it works.

So...is there any official documentation on what works and what doesnt? According to everything ive found on the internet, this shouldnt work...but it does, so Im somewhat confused....

Am I missing something?????

Even when launching a Hardware Accelerated PhysX game such as Batman Arkham Asylum, the second monitor continues to run, and the PhysX overlay claims PhysX is being done on the GPU.... 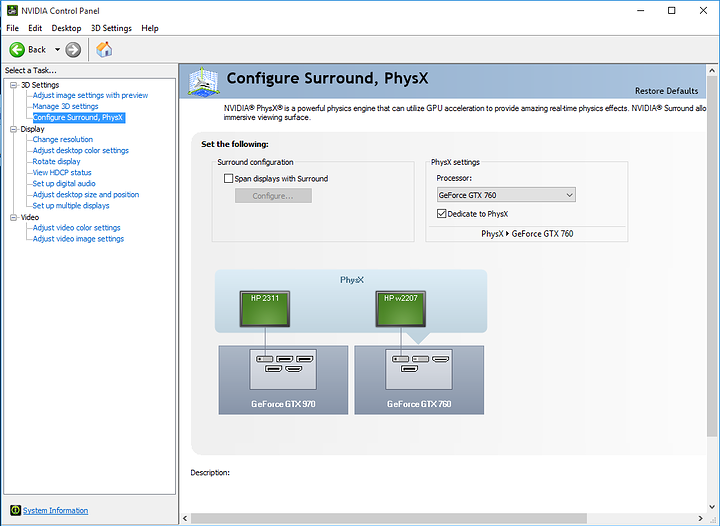 Why would you need a 2nd card for physX if your main card is already from nvidia?

Also just get a DVI to HDMI adapter,

I even saw a decent FPS boost in Arkham Knight

Besides, what other card would you pair it with if it wasn't a Nvidia card? Last I check, that old driver hack doesn't work on AMD anymore

I wouldn't really pair anything, cuz physX is all proprietary n shit, and really doesn't add much, if anything it just harms performance, it's just that it hurts AMD's performance more.

But like just hook up your second display to your 970

How PhysX, GameWorks or any other Nvidia proprietary technology harms AMD's performance is not really the point of this post but yes. Honestly, If AMD's architecture was faster at processing tessellation, I doubt it would be as much of a delta as it is

Thats the entire point of having a dedicated PhysX Processor, free up more performance on the main card and allow the lesser card to do all the PhysX calculations.

You asked what I would do, and on the tessellation front, look at TressFX vs Hairworks, TressFX works fine on both cards because it's open, Hairworks wrecks both cards, but it wrecks AMD more, and even if AMD were better at tessellation, the source code is still locked down for gameworks, preventing them from optimizing.

Also why don't you want to use HDMI?

Im not turing this into an AMD VS Nvidia thread

Nvidia drivers seem to assume that anything running under HDMI is an HDTV. This clogs my game menu with useless Monitor Refresh rate setting...

You could just a display port to DVI adapter if your card has display port, this ones a cord, it's just cheaper than a dongle. 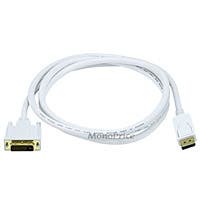 Use this cable for connecting your DVI equiped HDTV or monitor to the DisplayPort connector on your computer without the hassle of using a separate adapter.  This reliable, high performance cable has flexible 28AWG, tin plate conduits with pure c...

I could, and have already looked into buying a few eventually.

Let me rephrase the question of this post should anyone else respond..

Is it possible to run a monitor off a card thats currently being dedicated to PhysX? The internet says no, yet its working for me. Am I missing something?

It probably was just a driver issue that they fixed, if it's working fine then, no real need to change anything

I don't see any reason why it wouldn't work. Maybe if you're running a 3D application on that second screen but even then it should still work. As far as I know physx uses the CUDA stuff or the shader or clock or whatever, so the card is still there and can still do stuff, it's just that it's going to be doing physx as well as displaying whatever it's displaying.

I have SLI on my system and the default is to use the second card for physx (don't know why it can't balance on both cards but whatever) so if it can do SLI and still be dedicated to physx then I don't see why it can't just be used for a second display.

And like you said you tried it and it works, so you learned a valuable lesson about people talking shit on the internet :P

As above there's 2D on the cards for normal display as well as the 3D/Compute engine so it appears to able to.

You'll just have to test the three scenarios. Phys-X auto, Phys-X on primary and Phys-X on secondary and compare a benchmark or game fps in a repeatable scenario.

I was waiting for a card below the GTX 950 myself for the HEVC/x265 engine but also maybe as a secondary card.