Schleswig-Holstein in Germany switches from Microsoft to Open Source 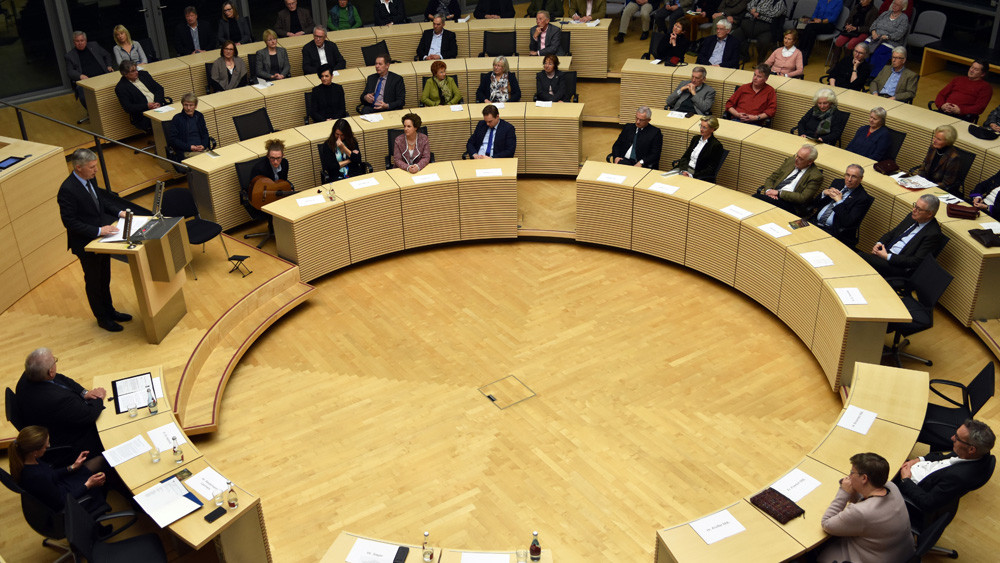 I can try.
Will Edit this post as I go along.

This should be it:
The English will be all over the place, but contexts and meaning are preserved. I marked parts I am unsure about with (?), to preserve context, I added a few sections. Marked with [ ].

The state parliament in Kiel decided to switch to Open Source Software in the long term.

On Thursday, the state parliament of Schleswig-Holstein decided against using Software from Microsoft in the long term. In the proposal made by the parties CDU, Bündnis90/Die Grünen and FDP to hold course with the strategy layed out in fall 2017 to „gurantee a modern and efficent management and get as many orders as possible done via Open-Source-Software.“ The goal is to replace all closed-source-software with open-source software.

Five Fraction vote pro change
The central IT-Department of the state mangement will report in Q1 2020 about ways and time requirements to execute the changes. Main goals are „safety, efficency, usability, _______ (?, Interoperabilität) and future proofing.“ The parties CDU, Grünen, FDP and SPD and AfD voted for the bill, the SSW party abstained from voting.

By implementing the changes, the parliament wants create an equal playing field for small and medium sized software companies that specialise in certain fields. By diversifying the software suppliers, they want to circumvent certain vendor specific vulnerabilities for their whole IT-landscape. Open interfaces and standards in software enable sovereign consumers (?) and inovative applications (?).

Less dependance
Staff in mangement will be trained with the new software to gain acceptance (?, this part does not make sense in the original). For example by „training them early in the process but also by explaining the motivation behind the move,“ stressed the representatives.

The representatives goal is to „reduce the agenvies dependancy on a few software companies to a minimum.“ With the introduction of computers came a few market dominating businesses. Politics and management are affected [by the lack of choice], now they have to become independent. Schleswig-Holstein wants to do the opposite compared to Munich (?, München) who stoped their drawn-out efforts to migrate to Linux and free software and now, under different administration, return to Microsoft.

My German isn’t the best, but I’m reading it as they plan to migrate to OSS to

The main problem I see with the switch to open-source is the lack of trained staff in IT for administration and politics.
And the usual “make your own distro” -> bad idea, don´t do that!

I really want them to succeed. Microsoft is so shit since Win10 happened.

Interesting. Curious to see how it turns out. Zed Shaw had a dialog about this recently. Well, kinda, more about corporations using Open Source instead of governments. Depending on who you talk to, they’re kind of the same thing?

Changed my perspective a bit on the whole thing. But I’ll leave that for another thread. Will keep an eye on this. Interested to see where it goes.

Will keep an eye on this. Interested to see where it goes.

When they say Q1 2020 for evaluation, then it will be a long while before we see meaningful results. It is government after all.

And the usual “make your own distro” -> bad idea, don´t do that!

Munich did something similar, though theirs was SUSE based if I remember correctly. They “could” use that.

It’s funny though that Munich is switching back to MS (because €€€ I guess), and the northern people are going the other direction.

Ms has been shit since vista according to businesses around me. Service policy wise, they would call customer support and get hung up on most of the time.

Don’t let the headline fool you. Myself, I am suspicious of Microsoft having anything to do with the Linux Foundation. This began as a fly in the ointment and now, IMO, open source is becoming something other. Kiss it goodbye coz you will never auf wiedersehen the Linux you once knew again.

This has nothing to do with Microsoft in open source though.

I’m more curious about workflows / services they’re providing that depend on custom non opensource software implementations - beyond just what individual employees happen to be running on their desktops.

Ideally, they should all be able to to their jobs from $150 Chromebooks (or some other kind of disposable machine that can run a browser like Firefox maybe, or even a windows desktop if they need Windows specific software).

Many companies including mine have been on the lookout for open source software.

Licensing is a sick fucking joke.
Control and ownership is nearly extinct.
The entire windows/office/ad catalog is moving to software as a service with monthly subscriptions per user.

Our biggest hurdle right now is manufacturer provided software that only runs on windows.

Corporate influence will be coming soon I bet.

Ms has been shit since vista

All software is shit, to varying degrees.

The thing with Vista though is that Windows got “good enough” for business some time around Windows 2000/XP.

There’s very little that any business actually wants included in Windows since 2000, save for ongoing support. Which is getting ever more expensive to deal with…

You underestimate how handy AD truely is.

It pisses me off how companies don’t mind paying 6 to £10 a month for O365 subscription per user but when you recommend a secure email provider like posteo.de to normal person for 1 euro/month they think you are out of your mind.

Although with O365 Business premium you get email and the office suite too.

Being a contributor has nothing to do with ownership.