I’m in the middle of testing and messing around with my new computer:

My problem is currently (apart from my RAM troubles - detailed in my other post) that the Samsung 970 EVO Plus drive shows up in HWInfo and in the Samsung Magician SW as PCIe 3.0 @ x2.

Many thanks in advance,
Andrei

Edit: useful:
All I would say is try one of the other sockets, even if they are under GPU’s?

Not useful:
It might be some pcie4 thing, but you would have seen in the Bios/UEFI if it was set to pcie4

am I expecting too much? (x2 is normal?)

No should be x4

Check the bios to see if you can manually set the slot to talk in 3.0 and you could try another port as well. (What port do you have it plugged into)

The board is advertised as all m.2’s doing PCIE4x4, but it’s only x570, so I don’t see how they could spare the lanes, and have some left for the regular PCIE sockets

@mutation666: I had a short look in the UEFI; I see no place where I might specifically set the M.2 slot to be any kind of PCIe (3.0 or 4.0, 2x or 4x). The UEFI seems to only inform me of the existence of the drive in a particular M.2 slot, but does not really let me change anything. Also, it says nothing about whether the PCIe is running at 2x or 4x, just that it’s 3.0. The 2x part I see only in HWInfo type programs, otherwise I wouldn’t know better. Also, to your question, I have it mounted in the M.2 slot closest to the CPU, above the GPU. There is an additional M.2 slot below the CPU and then a third one connected to the chipset, sharing bandwidth with the SATA5/6 slots (it seems).

@Trooper_ish: on the X570 Aorus Owner’s thread on overclock.net there is a link to a google drive file detailing the PCIe organization. Out of that file it looks like it should fit with x4 on the M.2 slot, but I have by no means understood the whole picture, so I could be wrong…

@All: anyway, I will try a different M.2 slot (the one just below the GPU) and a reseating and will report back.

What does the benchmark results show? Maybe its just HWinfo being wrong?

Can you try reseating the cpu maybe not making good contact as you have been having quite a few issues with this set up.

Reseating the CPU might be an option at the moment, since I seem to be having both RAM and SSD troubles… but it’s a hassle… I have to dismantle the whole computer…

As it happens, I just ran a benchmark in Samsung Magician, and saved it to compare with the other M.2 slot I will try to use. Here it is: 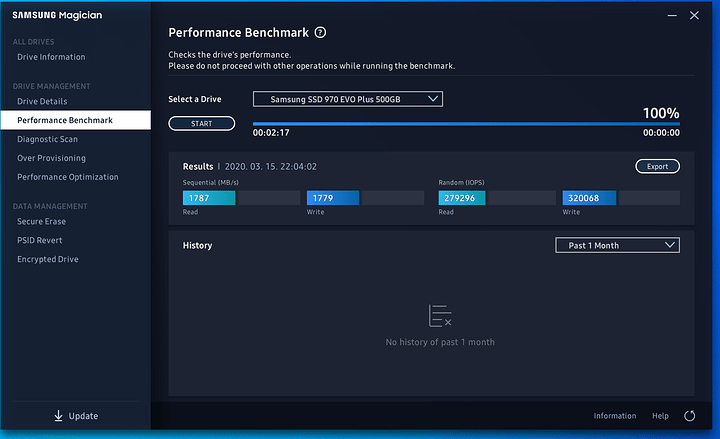 I’ll report back with Benchmark result once I move the drive to the other slot.

What PCIe slots are you using, seem to remember that one of the M.2 slots will be x2 if you are using some of the SATA slots because there are not enough pci lanes. One of the M.2 should be directly through the CPU while I think the issue will be with the one going through the chipset instead.

seem to remember that one of the M.2 slots will be x2 if you are using some of the SATA slots because there are not enough pci lanes.

I have it mounted in the M.2 slot closest to the CPU

There is an additional M.2 slot below the CPU and then a third one connected to the chipset, sharing bandwidth with the SATA5/6 slots (it seems).

Guessing you didnt make it far enough down yet

Ahhhh, didn’t see that one no.

So he should be directly wired to CPU, so if he shows up at 4x off the chipset i think it is the mounting of the cpu or the mobo (he is having ram issues too)

I have read the MB manual, and the way I understand it we have:

So, what I did now is I put the SSD in the M.2B slot, and it shows up as x4 in Samsung Magician and HWInfo. Have also a look at the benchmark result (in the M.2B slot the Random reads and writes are slightly lower than the M.2A slot, but the sequential performance is almost doubled - literally)… 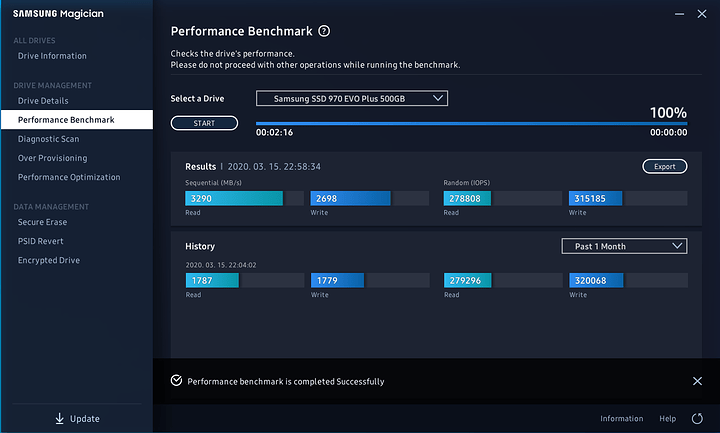 I’ll put the SSD back in the M.2A slot, hoping it was actually a SSD seating problem, and report back… If that’s not it, then I will have to bite the bullet and reseat the CPU.

So I put the SSD back in the M.2A slot (connected directly to the CPU). And guess what: turns out it was a seating problem after all, because now it shows as x4.

And here are the Samsung Magician benchmarks, compared to the previous: 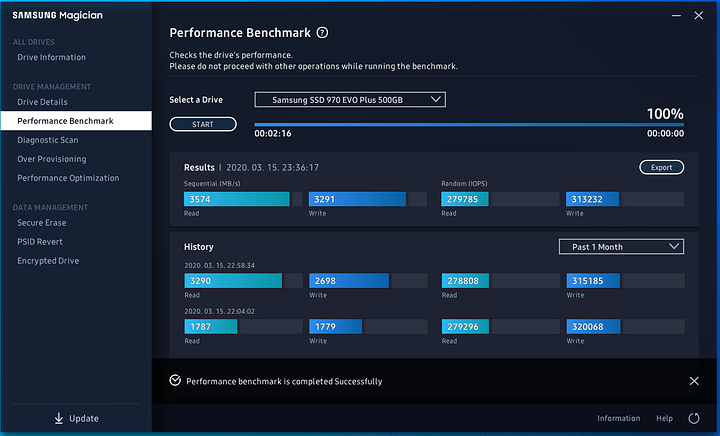 And here is what HWInfo reports: 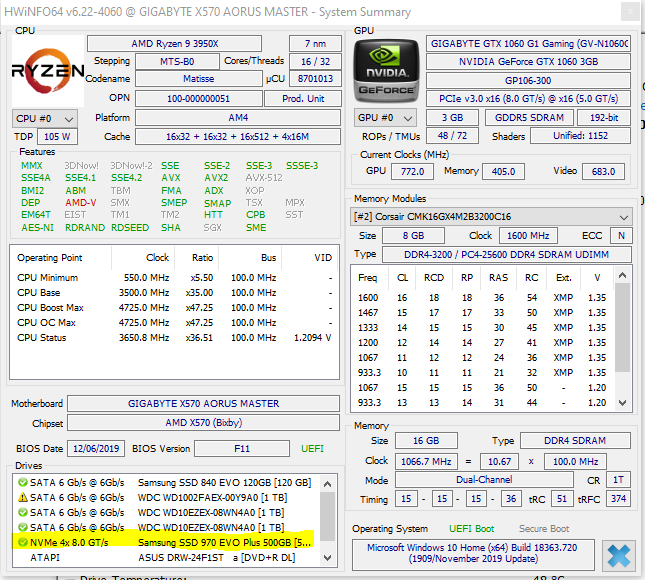 I’ll mark my last post as “Solution” since I think it gives a good picture on the performance impact of the various connectivity options for an SSD. Someone else might find that interesting.

Did re-seating the cpu fix it.