The SSD is the boot drive and is relatively new (1.67 TB written). I performed a secure erase when I got my new computer through the UEFI of the Formula and installed windows 8 (I was using it in an older system with windows 7). I overclocked and had some bluescreens but I checked the disk and windows is not corrupted. The disk is plugged in the Intel port, not the 3rd party controller. I have 164 GB of free disk space. 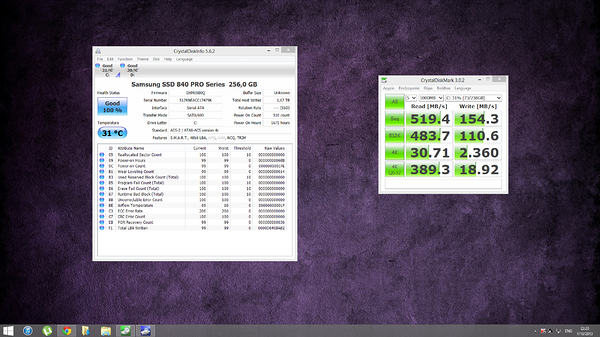 Those write speeds are shiiite, tried updating the firmware? Run off another non-intel sata port?

here is my speeds on the same drive as you; http://imgur.com/KNAAJx6

I would probably just rma it anyway.

I had the same strange thing, wiered numbers, and i tried also everything. after a few days of arguing couple of windows reinstalling  i got now reasonble numbers.

yeah i have the ocz vector 128gb version and it doesnt reach its read and writes it says, but there very close, what version do you have? usually the smaller drives are a bit slower