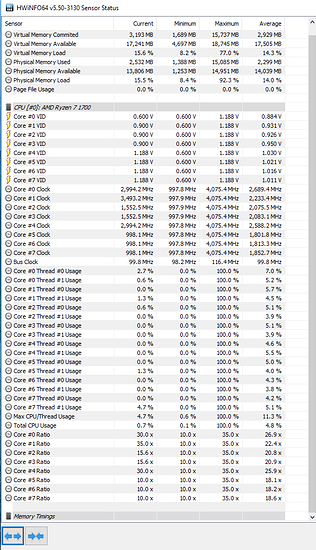 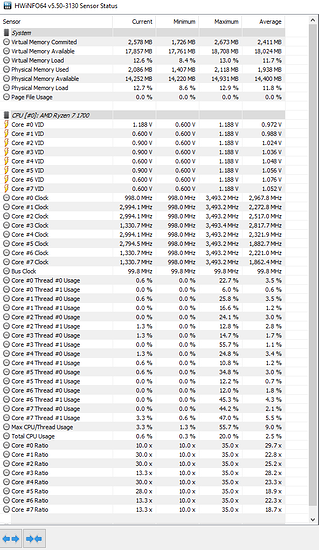 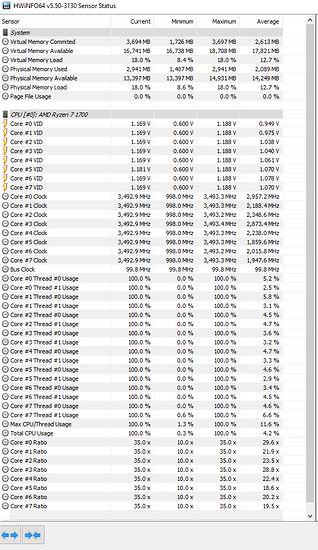 I've begun logging sensor data. Will see if it reports higher than 3.5Ghz and when. If it does I'll change P-state 0 to a higher frequency, then log again to see if it gets past 4075 Mhz.
If there's other tests or prinscreen needed, just ask!

In your first picture it shows that your BUS/Base clock, (BCLK) went up to 116.4Mhz.

116.4Mhz * 35 (multiplier) = 4074Mhz.
This however makes no sense since the ASRock X370 Killer/SLI does not offer an external BCLK.
So either you do not have the board you say you have, or your HWinfo, or Board/CPU is misbehaving.

Either way if you take an actual BCLK of 100Mhz * 35 you get your actual clock.

Definitely not an XFR boost as it reads 4075 across multiple cores.
However, that voltage you reported for what you called an XFR boost was not at all high. XFR boosts often use 1.45v and even higher.

While AMD has not revealed the highest safe (sustainable) VDDCR_CPU (CCX) or VDDCR_SOC (data fabric & peripheral) voltage levels, it can be speculated that voltages higher than 1.4500V are generally not advisable for sustained use, at least in conditions / workloads which result in high power consumption (i.e. all cores fully stressed).

Despite it is true that the high-end models can have their default voltage set up to 1.47500V during their maximum single core boost (XFR) operation, the power consumption / dissipation, amount of current flowing and the temperatures are very different between the scenarios where only a single core is fully stressed or all of the cores are fully stressed.

This is by no means a full blown review. It just provides some of the more in-depth information, along with some test results. - CCX -...

I already attributed it to the 116Mhz BCLK. Either something glitched out (internal CLK maybe, but that usually causes a crash) causing that reading or he has a different board than he says he has since the X370 Killer SLi/ac does not have an external BCLK.

It's the Killer SLI without AC. It didn't happen again, however system usage was different. Then again, must be a fluke reading.
Ungari: At stock settings HWInfo will log the highest clock for each core. When each core will hit XFR it will show up like that( all cores at 3.75GHz at stock R7 1700). That's the maximum frequency tab.
I was just hoping XFR was possible at non-stock frequencies. That would have been nice.
Since I've got nothing to loose, I'll keep at it.

XFR should only boost a single core.
Also, it's shutoff whenever OC State is automatically engaged by changes to clock/P-States.
BTW I have a Killer/SLI ac.
There is a way to activate XFR in OC if you are interested, but it is risky without a voltage cushion overhead.

Well XFR does it only on one core. Let assume core 0 gets XFR, after 2 minutes core 1 gets XFR, and so on. If a hardware monitoring tool is used, then it will log the maximum frequency for each core individually no matter when each core reached XFR.

Yes, i'm interested in how to enable XFR in OC. Please do tell! ( I'm drooling over here)

For overclocking purposes the engineers at AMD have included a special mode (the "OC Mode"), which will disable all of the limiters, voltage controllers and protections (except the CPU thermal protection) upon the activation.

The "OC Mode" is automatically activated when the user raises the base frequency (P0 PState) of the CPU. The SMU indicates the activation of the "OC Mode" by sending "0C" code to the diagnostic display (Port 80) of the motherboard.

Understanding the different CPU frequency states (PStates), their voltages and especially the actual effective voltage is harder than ever before with Zeppelin. Unlike with the older designs (15h family) the boosted PStates (Turbo & XFR) are completely invisible.

Due to that fact, they are officially called as "Shadow PStates". This means that unlike with the previous designs these PStates are not defined in the standard MSR registers and cannot be modified (or be seen) by the user. The only way the user can even verify their presence is to see them actually firing (i.e. from the actual effective frequency & voltage).

Understanding the voltages specified for the standard PStates can be confusing as well. That's because in the normal operating mode (i.e. "non-OC") the SMU controls the voltages automatically through the voltage controllers.

For example, the P0 PState might specify 1.37500V voltage, while the actual effective voltage during the residency in this state is 1.26250V or slightly higher. This is not a glitch, but the normal operation of the CPU. Basically, the voltage specified in the MSR is just the upper limit and the SMU will automatically add a dynamic negative offset to this value, reducing the actual effective voltage. The amount of the negative offset varies depending on load and the temperature. For the tested sample the offsets were -120mV & -144mV for the two highest base PStates (3.6 & 3.2GHz).

When the "OC Mode" is activated the SMU will disable the voltage controllers, which among other things disables the automatic voltage offsets. This can create an illusion that the power consumption is heavily increasing due to the use of "OC Mode". While technically it is accurate, it is more of a consequence than the actual reason. A vast majority of the increased power consumption comes from the now disabled automatic negative voltage offsets, which causes the actual CPU voltage to increase anything between 50 and 150mV. Because of this behavior, it is advised that the user doesn't increase the CPU voltage right away (when overclocking), but only upon actual demand (as usual).

One of the major down sides of the "OC-Mode" is that upon activation both Turbo and XFR will be disabled as well. Basically, this means that unless you are able to reach at least the default MSCF / XFR frequency on all cores, then you will essentially be losing single threaded performance compared to stock configuration.

Since XFR apart from LLC can and will call for higher voltage spikes up to 1.475v, it is important to be running below this with enough headroom to absorb it. This is assuming that it will boost the same amount from stock voltage which I do not know. The other problem is the voltage offsets which if not accounted for could be dangerous.
Personally, while I'd like an extra 50-100Mhz on one of the cores above manual overclock, I do not feel it is worth the chance of overvolting, especially since the ranges on the LLC are unclear. I should contact AsRock and ask.
You should check in with the guys on this thread who have experimented with this:

So by no boost, you mean XFR is disabled? If so, what settings in the BIOS are you disabling? As to the 1700, all the reviewers are saying likewise. But let me say again, I suspect many of these benchmarks are too good as they are from 1800X and 1700Xs that were Nerfed to fulfill inventories. I could be wrong, but time will tell very soon when we start seeing more folks with 1700s that simply won't OC that high. @Sensai Those are very nice results at stock. Do you mean to say that TWO cores had XFR Boost?

Now with compatibility and OC improvements.

You seem to follow these things so Taichi vs Professional Gaming BIOS, are these identical and would I in a sense just pay more for actually getting hardware?

I'm starting to reach to the end of my infinite patience..

The X370 Professional Gaming and X370 Taichi are literally almost the same board. Only difference being ethernet and some header IO. But the Taichi's BIOS is updated much earlier/frequently.
Mainly because it's the board all the reviewers got.

In terms of bios and overall build quality they are pretty much the same.
The professional gaming has some additional feutures which might or might not be worth the additional cost based on personal preference.

I just wanted to add this information to this list. It is an external link to voltages and frequencies using p-states

I already know these, because reading hex is natural to me.
But reposting here for better visibility. 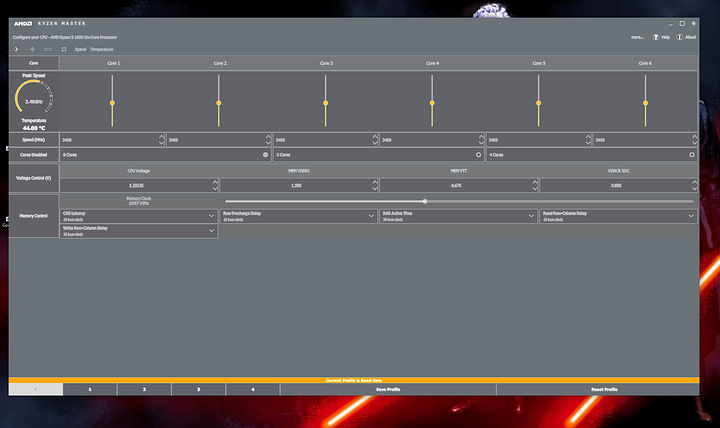 Ryzenmaster screen.png2001x1192 294 KB
For some reason, my Ryzen Master is always blurry and washed out! I just don't get it! I know early adopters should take their woes with them to the bathroom and flush em with all the rest but jeez this is annoying.
catsay May 26, 2017, 8:40am #75

Ok no Idea why it's blurry. That looks like a windows desktop compositing glitch of some sort.

As for the application, it's worth mentioning that you're currently on a read-only profile mode and need to select on of the bottom numbered tabs to create a profile.

Looks a bit like what happens for transparent moving gifs which I guess is because of colors, so I would check if colors are ok

Actually your Ryzen Master seems to be missing black & transparency

I found this information from Asrock forums. Here is the link

Pstate OC is bugged currently, or not fully implemented.

You can only change FID on pstate0 and leave the rest on auto, and then use Vcore offset in main UEFI page to increase the core voltage (if default is not enough).

Any change in VID and/or DID on pstate0, and you end up with full OC or pstate1 in Windows.

Running mine like that and its just staying max clocks till I leave PC to be and then it goes to lower clocks, then HWMonitor starts to log lower numbers like I think it has been visiting 100MHz?~