I have a couple of these Roland Sound Canvas SC-88 Pro MIDI sound modules. The Sound Canvases were used back in the 90s by many sound designers and composers to make a lot of the MIDI game music that was in many of the video games of that time period, and they can also be used with MIDI controller keyboards as well as computers playing MIDI files to access their hundreds of sounds onboard. However, I had an issue with one of my units, that when I plugged it in and turned it on, I heard a low humming noise coming from the output, in addition to any music generated by the device. It was annoying enough to prevent enjoyment of listening to the music output, so because of this, I decided to open it up and see what was going on.

I intuitively knew it sounded similar to a 60hz humming frequency (or one of its harmonics), so I knew the problem was likely around the power supply area. That’s the first place I looked, and sure enough this is what I found: 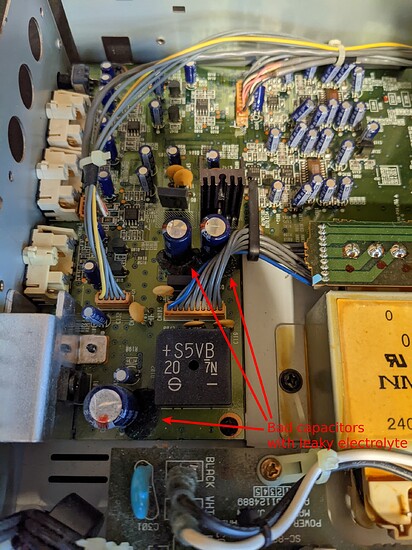 I immediately noticed the puddles of electrolyte goo underneath the large filter capacitors that are supposed to be smoothing the 60hz ripples out of the rectified DC voltage. A closer inspection revealed one of the smaller capacitors in the middle of the above picture had even corroded through its leads and almost completely pulled out of the socket without de-soldering: 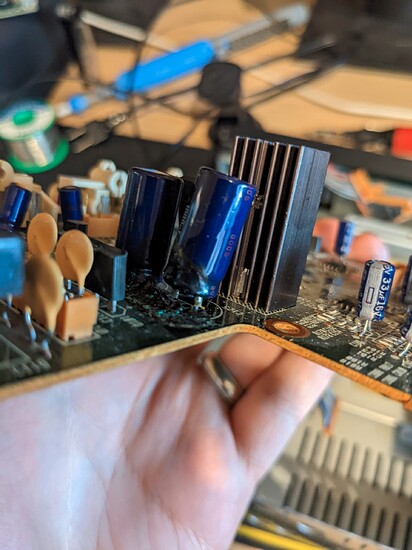 I ordered some high-quality Rubycon caps made in Japan from Digikey, and I was able to desolder the old caps and clean up the electrolyte mess with isopropyl alcohol, fortunately without stripping traces off the circuit board, and then install the fresh new caps in their place: 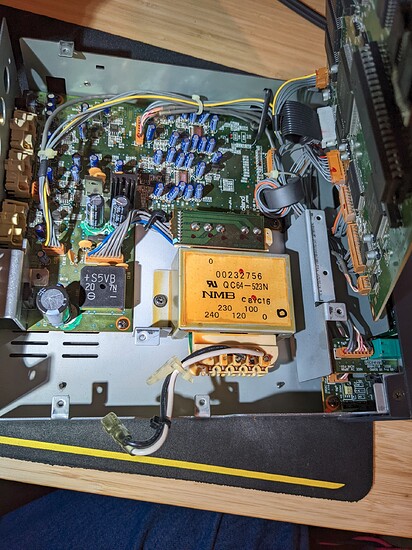 This particular Sound Canvas originally hails from Japan, where it’s designed to be used with 100V mains voltage. There are a couple issues with that on this particular unit. First of all, the line cord is an unpolarized, ungrounded NEMA style plug: 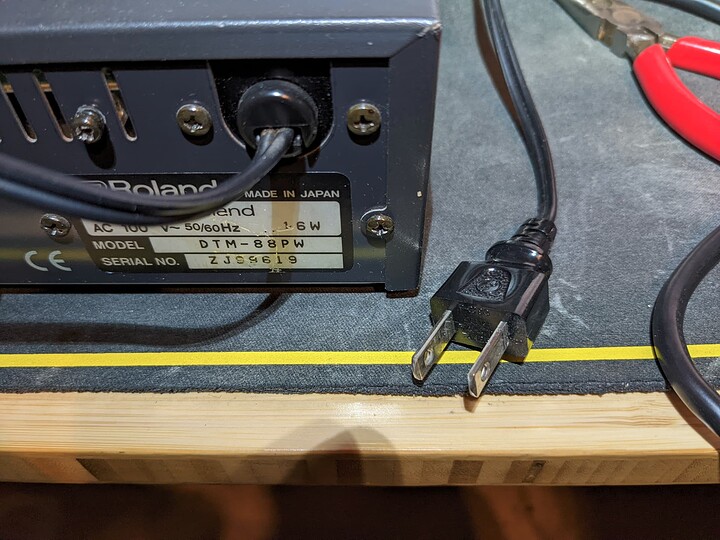 The power cord also works in North America on 120V mains voltage, but the transformer inside the unit has various taps on the primary side for different voltages, and originally the unit was using the 100V tap. Since the secondary is supposed to put out 12V, I think because of using this in North America, it was causing higher voltages on the secondary, and possibly make the regulator and filter capacitors work harder and possibly contributing to the failure of the caps. I decided to desolder the hot lead coming from the main power switch from the 100V tap and move it to the 120V tap to match my normal supply voltage here in the USA.

When I was originally disassembling the board, I accidentally broke the plasic plunger of the power switch. I ordered a couple new switches of this style, but they shipped from China and were going to take a while to arrive, so I decided to try to fix the original switch just to get it working again. I was able to painstakingly take it apart and superglue the plunger back together, but the switch was a bit mushy, even though it did work ok. The new switches arrived faster than I thought they would originally, so I went ahead and replaced it since it had a much cleaner feel to it: 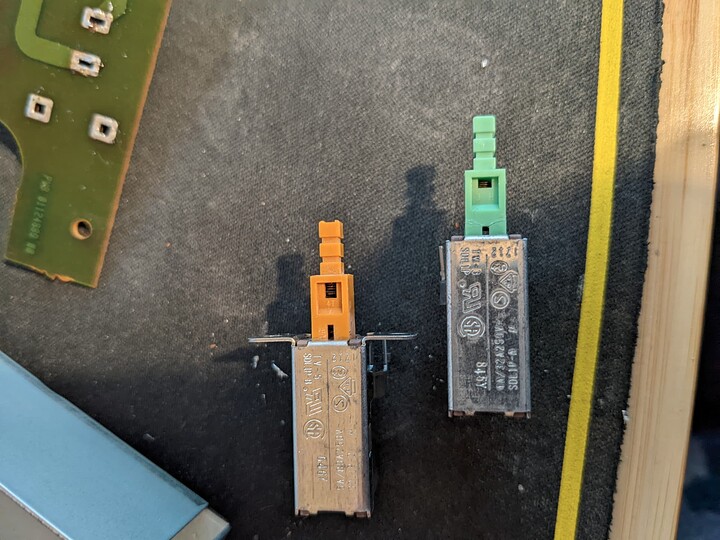 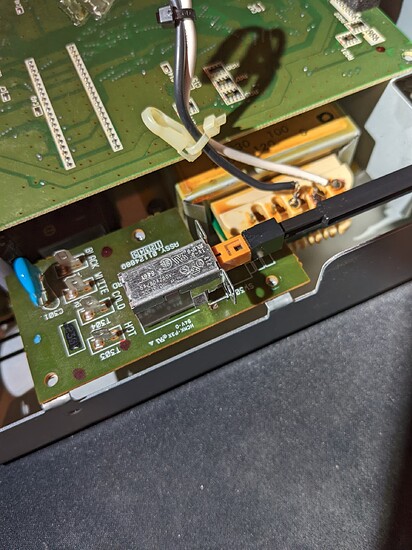 Next, I went about replacing the line cord. I wanted something that was grounded for safety reasons, and to absolutely ensure that I would never come across any line voltage on the chassis of the unit if there was ever some sort of component failure inside the unit, as well as to make sure the hot side was the side that got disconnected by the power switch. I also ordered a new strain relief, ferrite bead to keep high frequencies off the line cord, and some new crimp connectors that mated with the existing connector tabs: 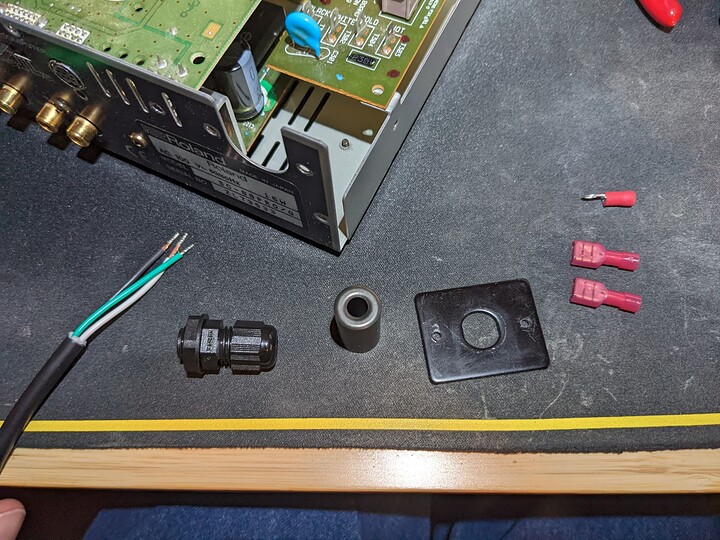 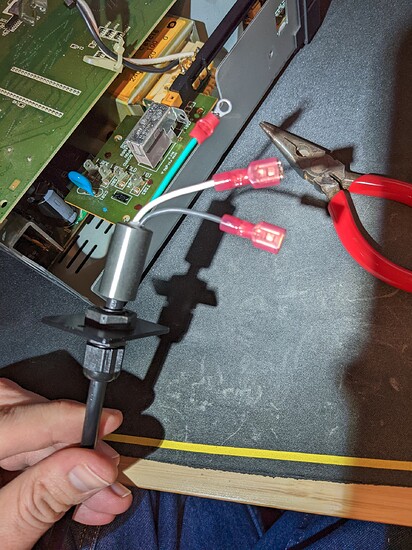 I secured the new ground ring connector to one of the chassis screws underneath the power switch circuit board: 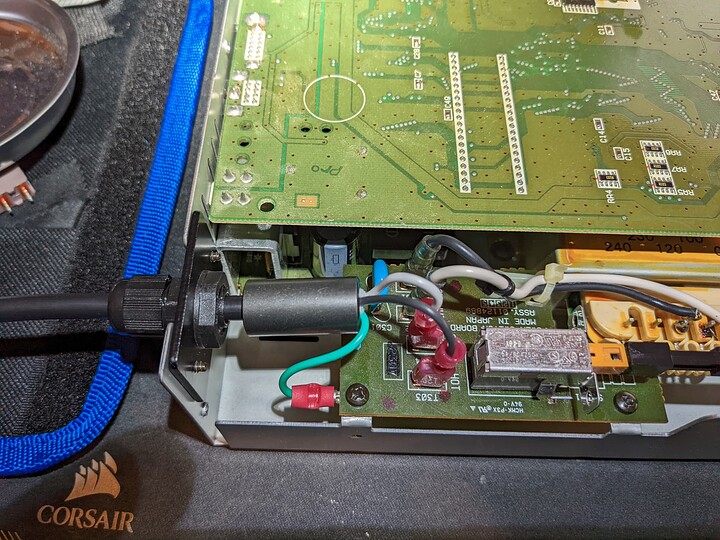 The unit turned on and the humming noise was completely gone! 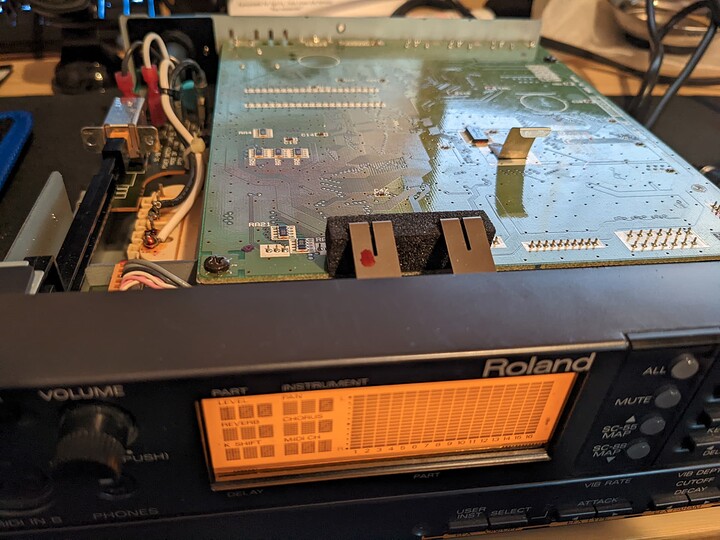 Here’s the rear of the unit with the new line cord and strain relief: 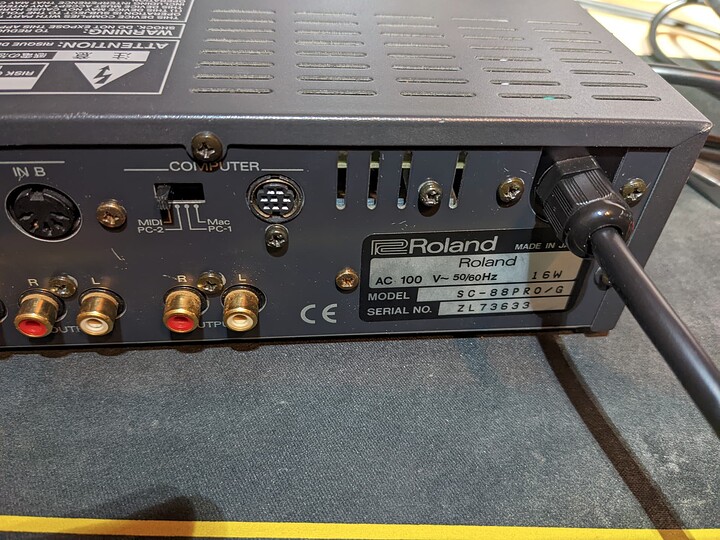 I’m very happy with how this unit turned out. I got rid of the annoying humming noise, and I got duplicate parts for everything so I may do the same thing with my second unit.

Nice. I have a few of the Roland Analog Synth Guitar kits that I have revived from the dead. I am a big sucker for vintage Roland MIDI equipment.

They are making them again! With the same components! I have a friend who has one! He has not been to be able to do programming because he thinks that he has to buy a midi serial device!

What do you mean they are making them again? I know they mainly sell and support the Sound Canvas VST plugin for software DAWs today, but I’m unable to find any information about any new hardware being produced. Both my units I purchased from eBay used, and I imagine that’s how most people get these things today since they were built back in the 90s.

I recently just got the midi files from Ultima 7 and played it with a brute force decrypted Roland SC-55 soundfont off the internet and I really like the sound but I do not know actually how faithful it is to the actual sound coming out.

Pardon my ignorance and I know this is legitimately cool and all and I really want one now as well but why not pipe it into something like a midi emulator and get the soundfont on the internet?

All in all, freaking awesome and I love it! Thank you for the detour to memory lane.

I think part of it is nostalgia - I can’t really comment on the digital VST because I don’t have it and I can’t really compare, but I did record one of the ultima 7 midis on it just now and this is what it sounds like:

I will say that if you’re a musician, being able to have this thing on the road is nice if you don’t have (or don’t want to) take your own instrument like a keyboard with you, or it doesn’t have many sounds to choose from. This allows you to choose a sound without needing a computer.

Oh wow it definitely sounds better! I wonder if it is because of the hardware sound processing (vs software) or if the SC-88 just sound better than the SC-55?

I think it was using the SC-88 Pro sounds the first time around, since it looks like it’s just using the default patches for flute, several guitar tracks with chrous effects that are panned and possibly detuned for the spatial effect, and strings/horns. I went on all the active channels and pushed the SC-55 Map button to map it to those sounds, and this is what it sounds like now with the SC-55 sounds:

It sounds different and yours have more “magical twang” and a nicer sound than the downloaded soundfont. Improving it with just software and sound tweaking could be a project for the future.

It does sound nice, but it’s not perfect. I have some issues with artifacting or clipping/distortion when I crank the volume too much. If I reduce the volume so it doesn’t do that, I have to crank the gain on my computer input because otherwise the signal never gets above -20dB or so. There were around 30-40 or so other electrolytics on that L-shaped board above, and most of those are around the two DAC chips that shapes the outgoing analog audio signal, but I don’t know that much about these things to know if those might be causing the distortion at very high volume levels. I do wish the output audio out jacks outputted at a constant line level regardless of the volume knob, especially because these things tend to be used with other mixers or other amplifiers after this stage. As it is now, the front volume knob controls both the output level and the headphone jack level.