Rise of the Tomb Raider now on Linux

I can only underline the “one of their best ports yet”. Got it on that sale and running it on my RX 580 with the open driver - works like a charm

…anyone try their cpu-game-mode-thing yet on a Ryzen and seen any differences?

Not that I finished the earlier tomb raider I do like to support linux games. So I will prolly pick it up tommorrow. In AU is on sale at 65% odd off so … Why not.

Only game I had to refund cause it did not work so far was Warhammer 40,000: Dawn of War III.

Didnt work on Fedora so booted it… Not that old games I bought no longer run :(…Some are targeted to ubuntu 12.04

This is good news! I’m halfway through the game at the moment on Windows. It’s pretty decent but I think the guns cheapen it a bit, it’s much more fun if you use the bow & arrow only.

I can dream that one day I can ditch the PCI passthrough as all the games I want to play will support Linux.

Wow, I had to update the Nvidia beta driver for my 980Ti. Before that it would freeze and run poorly. Beta driver made everything smooth.

Huh, I had some random, inexplicable crashes while playing on Saturday, but hadn’t enabled the “game mode” and was transferring a whole bunch of files.
Was stable again after enabling the performance mode.
Shrug still pretty good, and glad I brought it

While my experience wasn’t that big, after installing the beta driver, I do notice it seems to be stuttering a little less; no doubt the new vulkan improvements are helpful there.

Well, not surprising as the system requirements list Mesa with no mention to amdgpu-pro the game wont run.

I just installed 18.04. First off, the system boots much faster than 16.04, the mesa drivers finally support Vega gpus and dual monitors but still no freesync. 144hz refresh works though.

Game runs excellent! It did crash on me in one specific area a couple times, not sure why.

The launcher has a handy feature to select the game monitor (with a visual indication), the left is my primary monitor, with gnome header at top.

I wish more developers would do this… 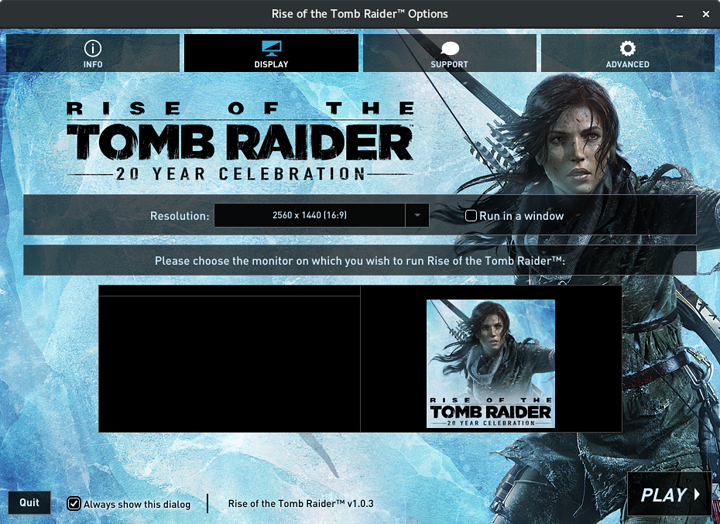 I know this is not representative when it comes to playability or “smoothness” but it is a data point. Also, it really does not look drastically different to me in terms of visual fidelity. Seriously, I would play that on the Low preset and it wouldn’t really bother me.

For reference, I am getting 2900 points in unigine valley with the Extreme HD preset.