Ever since I built my current desktop computer it has been unstable under Linux with idle freezes, random shutdowns and other crap.
It kinda worked for some time, but recently I switched from Arch to Fedora and updated my bios at the same time and it’s pretty much unusable now (I work exclusively on Linux).

I read all the kernel bugtracker and AMD forum posts and tried all the BIOS settings and C6 deactivation scripts and nothing helped. It seems that multiple people with the same motherboard / CPU combination had similar bad experiences.

Anyways, since I need a stable system for work soon, I want to replace the CPU (and maybe the motherboard?). Since I rarely check on new hardware unless I’m in the market my question therefore is:
Do you guys have experience with the current Ryzen models on Linux? Are they stable?
I’d love a system as stable as my 4 y/o Intel + Intel graphics. Thatone #justworks

My current setup looks as follows:

If the newer Ryzen’s don’t show the same problems on Linux I would just upgrade to something like:

P.S. I hope it’s okay to post this into the Linux section, as I specifically hope to hear about Linux stability problems. The ones I had are hardly ever mentioned when talking about the first gen Ryzen, as they are mostly not present on windows.

I can’t say I’ve had any stability issues with either my 2600x build or my 3600x build. I have to ask, have you run memtest?

To me it sounds like you have faulty ram, there’s no reason that a first gen ryzen system should be freezing so badly in linux. I’m running Fedora 32 on my ryzen 3600x and it’s been on for over a week with no issues, I can imagine that I’ll be able to leave it on as long as I want with no further problems.

Good point, I will start memtest right away.

However, I am pretty sure it’s the same problem described here and here.
From the AMD post:

but mostly the system just stops and I can find no logging that tells me why.

^ This is pretty much what happens most of the time for me, too.

It’s good to hear that you had no problems with your builds. What motherboard are you using?

The secondary build with the 2600x is now an esxi machine for vms but it was my primary system for a while running both windows 10 and kubuntu.

My newest computer. Runs well except 0AD plays up using an R5 3600. I found some new games to play. 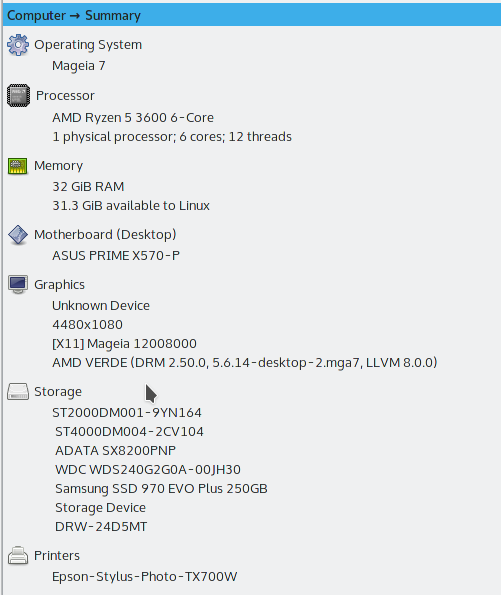 The low end ASRock AM4 boards from the early days are not great. I have read a few stories and had one myself for a minute before I packed it back up and returned it. Board and PSU are the two components nobody should skimp out on. That 430W you listed, what is that and how old?

Also, what BIOS version did you update to?

I took several steps to update the BIOS as outlined here. First updated to 3.40, then 5.50, then 5.90.
After each step I booted into Linux and checked whether the issues were gone.

My experience with that ASRock board was very short because it just wasn’t stable at all. I then went with an Asus A320M-K which so far is rock solid. I am running a R3 1200 and some ECC memory on it as a router. You can try to fiddle with the BIOS and disable all the power saving stuff as well as C-states and look what happens. If that doesn’t work I would switch the board first.

I’ve had an Asrock AB350M Pro4 with the same issue. There was a rather large batch where the system would just lock up after some time. I had it under windows, but just thought I’d let you know.

edit: I swapped it out for a MSI B350M Gaming and returned the ASRock

Are the new 450/550 series boards compatible with the old Ryzen generation? That way I could upgrade step-by-step, starting with the motherboard.

I think it’s probably just a motherboard issue. Used the same CPU, swapped the board. Friend went from constant crashes multiple times a day to 0 issues.

B450 is probably your best bet, maybe the MSI B450M Mortar Max if you can find it. B450 is compatible with 1st gen, and MSI has promised compatibility with 4th gen if you want to upgrade down the line.

I had a quick look around and it seems pretty hard to get ahold of one of these at a reasonable price, here. But I will look some more.

Thanks for all of your help!

Just want to point out that you can make your R5 1600 system more stable by adding this boot command. (My server was up 45 days at least before I rebooted it to apply a kernel update and sth else I can’t recall)