Hello, thank you for taking the time to read my problem and even more thanks if you can offer a solution.

So I have multiple drives in my computer two 500Gb SSd a 250gb SSD 1tbSSD and a 3.5tb hdd, my motherboard has support for 6 drives but power supply only has 5 sata power. One of the 500gb SSD is the boot drive.

I was trying to remove the 250gb to pass on to a friend after purchasing another 1tb SSD, I reformatted the drive with disk manager and then removed the drive, when I tried to reboot however it wouldn’t load into windows and instead just opened the bios. The other four drives were all still detected but windows refused to boot. Put the 250gbssd back in and it boots fine.
Was just going to install the 1tb in the last sata port only to discover my power supply only has 5 sata power plugs, so now I need the 250gb drive out to make use of it.

Could be that using an M.2 Slot disables a SATA port.

I am certain it is what @MazeFrame says. I want to explain this a bit: I had a motherboard that deactivated a SATA port when you put a M.2 SATA SSD in the secondary M.2 slot. These things are quite common, reference your mainboards user manual to make sure. Also during installation Windows normally creates multiple partitions for its installation. When you have multiple empty drives connected during installation Windows sometimes puts these partitions on different drives, which results in the user needing both drives connected to successfully boot into Windows. I personally guess it its rather the former problem than the later since you mentioned that you formatted the drive and have been able to boot into Windows after connecting it again.

Given the symptoms as described, it could be as simple as setting the boot device order in the bios after removing the 250GB drive. Changing the set of boot devices that the system scans/initializes can certainly confuse the BIOS, requiring the boot device options to be set again and saved.

Or windows could have put the bcd/boot sector stuff on the wrong drive at install again?

Can’t hurt to try the BCD repair thing?
It can’t hurt, but looks like I suggested it like over 5 times on the forum, and should wind my neck in instead of trotting the same thing out again and again

There’s only the sata drives none are m.2

What do you mean by this?

The main boot drive is already set to the primary boot device.

Or windows could have put the bcd/boot sector stuff on the wrong drive at install again?

If this is what has happened, how do I fix it?

If you can get into the advanced recovery menu, whether through a windows USB, or the main drive, you might try the BCD repair as below. 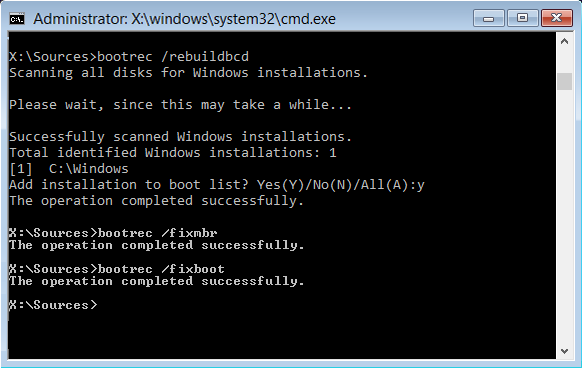 Learn how to repair or rebuild BCD or Boot Configuration Data file in Windows 11/10 using the bootrec.exe tool. This will help fix PC boot problems.

If you can’t get to the advanced menu, then you might not be able to do the repair, but I’ve heard (but not tested) that making a Macrium Reflect USB can help with it’s boot repair option, but I never tried it.

Worst come to the worst, might need to unplug all drives, boot off a Windows install USB and re-install windows. Might be best to copy the files elsewhere if you do, just in case.

So if it does not work I apologise for mis reading.

What do you mean by this?

When you install Win10, it sometimes puts parts of itself on other drives, not just the one selected for the install. Removing those other drives then results in failure to boot.

This happened to me a while back when I cloned an old cherryville ssd to a newer 860 evo (good call on that, the cherryville died a year later) and for whatever reason the EFI partition ended up on a hdd. Didn’t discover what had happened until I was swapping in higher capacity hdd’s.

I think you’re on the right track but I couldn’t get into the advanced menu.

Will just try hunt down a usb drive and probably just reinstall windows.