Remember when game developers gave away their source code?

Pepperidge Farms remembers. But seriously, I'd love to have more devs give away their source code for their obsolete engines. The most recent case I can remember was with Jedi Knight and Jedi Outcast, but I think Lucas Arts did that to piss off Disney but overall, it doesn't happen as often with big titles as it used to in the 90's and the early 00's with games like Doom, Quake, Duke Nukem 3D and Descent.

I think this is mostly due to more and more companies using middleware they can't control even if they wanted to give it away and Devs are more likely to give away their source code if they weren't a publicly traded company as the case was with Id, Apogee and Interplay though Interplay only released the source code to Descent 1 & 2.

There's also not much of an incentive for them to release their source code. and open sourcing old stuff is a nightmare, because depending on how it's licensed, you'll need everyboy that ever contributed at X revision to agree. But if companies did a crowd funding thing like if Epic made a crowd funding campaign to bribe everybody that contributed to the Unreal Build 226 and before and give their builds of unreal to the public, I'd be down with that. Pay a patreon or kickstarter-like campaign to get the source code to Unreal Rune and Deus Ex and let the community modernize their engines and add cool features and shaders and really optimize it for modern hardware.

But alas, I doubt that will ever happen, but there is hope for reverse engineering projects like...
- OpenTomb
The first five Tomb Raider Games

-Xoreos
Pre-Pre-Pre-Alpha, but this project hopes to reimplement Biowares's Aurora Engine used in these Games https://xoreos.org/games/index.html

-OpenMW
I'm looking forward to this the most. They're replacing the Morrowind engine so it can run on Linux/Mac, be native 64-bit and they're working on OpenMW 0.37 of which will be an overhaul where they replaced their middleware in favour of something that supports multithreading. Morrowind Overhaul won't run on any Computer at max 60FPS, but if the shaders were ported to OpenMW 1.0, it would run very well.

Console gamers feel like they own a game because they have a pressed disc with 1s and 0s, but what makes me feel like I own a game is a DRM-free copy that I can backup with the game's blueprints. (though technically none of us still own it, I just have a more permissive license that can't be revoked and is open platform agnostic of which is good enough for me)

Games with Open Source Engines that have been modded to oblivion:


Most of those graphics mods don't look impressive by today's standards, but with an exception of Quake 2, all of those games were on DOS and all of them can now be scaled to 8k and be ported to any OS thanks to the engine being open source and it increased the life of the game. I can fire up darkplaces (Quake source port) and find others who want to play a 19-year-old game online. It takes hackery just to get BF2142 to work due to the gamespy shutdown. 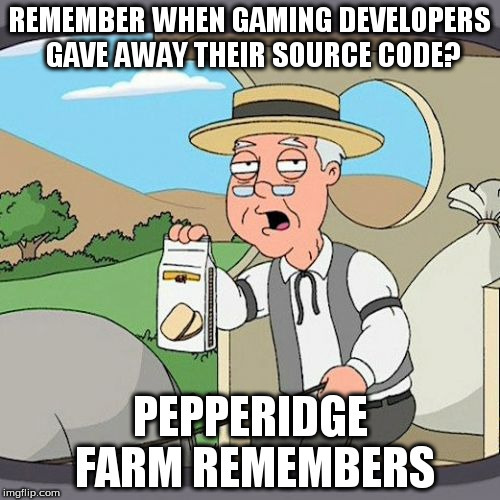 the good thing of giving your source code is of course anyone can modify it, but the bad is you essentially don't own your own product.

As for why companies don't do it anymore? eh why should they? yeah it's nice to modify it, but not everyone likes giving stuff away for free anyways. you as a developer made the product why should you give it away for free?

When I play Gamedev Tycoon, I always give out all of my older engines. You also can't really make much money on keeping your older in-house engines to yourself. There's a difference between open source games and open source engines, it doesn't matter that the Quake engine is open source, the only way to legally play the full game is to buy it.

Ya...but then you could actually start making serious money developing games, best way to go would be to release the code after a sales goal or something, although everything is going to pop up on the pirate bay quickly anyways so...most people don't even know what the do with the source code anyways

although everything is going to pop up on the pirate bay quickly anyways so.

Source code almost never gets pirated unless it's leaked and valve's source is out there with restrictive licenses, but it can't be legally open source until Valve says it is or 95 years after X revision is released, X revision will be in public domain.

You don't need many people to know what to do with the source code. Programs are like cars, not everybody knows how to build, repair or upgrade a car, but for the people that do know, it's ideal for them to have a service manual with blueprints.

He's done with Id Software. His Code at Id software isn't his anymore and we were lucky we got Id Tech 4 and I doubt Bethesda will release Id Tech 5 when Id Tech 6 comes out. Also, his engines are overrated. Since Quake, Carmack's team used machines no consumer could afford and by the time his team was done with a game, the engine could run on consumer hardware. After Doom, Carmack bought himself an expensive toy, it was a $250,000 SGI Workstation and he used that to make Quake and by the time he was done, he figured how to make it run on a Pentium MMX and then patched it to e advantage of the Voodoo 1. Quake 2 & 3 were his first couple games designed for 3D acceleration from the get-go and Doom 3 was his first stab at dynamic lighting, specular mapping, bump mapping and more advanced shaders, but Escape from Butcher Bay had all of that shit and came out around the same time. RAGE showed off texture streaming, but the megatexture implementation was a nightmare for modders to work with.