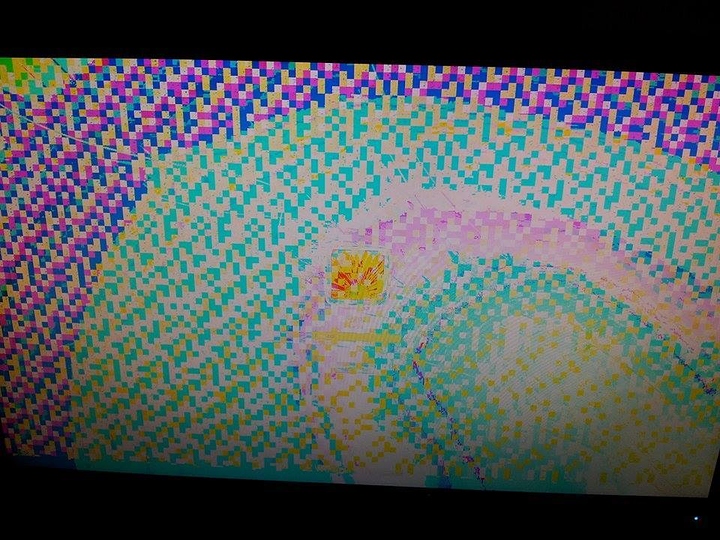 When I first start up my computer (boot or from sleep) this is what my log in screen looks like. You can see the little flower icon I never customized. This will go on for several seconds, then usually fix itself. While it's like that, I go ahead and log in. I think the change of screen is what snaps it out of the glitch because I think I remember this happening when I started a game a week ago and I fixed it by alt tabbing and re-fullscreening the game. So far, it's not been a permanent problem that renders the computer useless, but it's still obviously bad.

As far as why this is happening, I'm unsure. I updated my NVIDIA driver to 350.12 or something the day after the release of said driver and soon after this started happening. I rolled back to 347 (?) thinking it was just a driver bug, but the problem persists. Googling has turned up nothing and NVIDIA hasn't followed up the update so I assume this is an isolated problem and may not involve the driver. The only physical manipulation with the GPU is water cooling for months now. Although I have never had perfect stability, I've never had stuff like this happen before. The most extreme things to ever happen so far have been OpenGL crashes for Starcraft 2 and black-screen-of-death crashes (sometimes for a few seconds, sometimes actual program crashes) for Guild Wars 2. I don't even overclock because Guild Wars 2 and Starcraft 2 are really bitchy about overclocks for some reason (in my experience). As far as these problems go, Googling has led me to believe this does't happen to me any more often than other people. I've even been assured by other GW2 players that the game doesn't handle large OCs on GPUs well, so I stopped and that checked out. This is way beyond my troubleshooting and I'm not new to computers.

Any help figuring out these instability issues is much appreciated.

Looks like a dieing Gpu to me (what psu do you have) and if you know its bad why are you useing it? realy bad psu's can damage computer components with bad voltage regulation or riple and can even fry your entire rig.
Allso if you are water cooling your card you probably have exposed Vram chips and Vrms that are over heating if you dont have good airflow in the case.

Ultra LSP 750, I can't tell you any more specifics about it. You can see my other thread about shutdowns if you must know (funny how it's not shut down once since I made that thread). It's not absolutely terrible, it's just not a reliable, certified one, so I've babied the system since then. It hasn't been replaced yet because I'm a college student who had a nasty and idiotic problem with taxes. Now that tax season is over, it WILL be replaced. And the GPU dying? It shouldn't be. As of... last month?... it's only a year old. I've not put it through nearly enough to wear it out in one year. Could be a dud? Dunno. As far as the VRAM, the 760 always has exposed chips. There's a metal plate over (not touching) the Vram and the stock heatsink has no contact with anything except the GPU and Mosfet. If anything, the Vram is cooler now.

VRAM could be an issue still. UBCD has a tool included to test VRAM outside of an OS environment, so you could try loading that up onto a USB drive to just affirm your suspicion that the VRAM is fine.

PSU could be an issue as well, but normally if the PSU can't handle the load it will just fail to start.

I'll check that out; I'm not familiar with it. In testing for figuring out the PSU problem in the other thread, I did a lot of diagnostics, so there's a lot I'm fairly sure isn't the problem. But this is another thing to check off. And yes, that's why I figure the PSU isn't the problem.