I'm checking on MSI Afterburner and I see that when my GPU gets to 70 degrees, it starts throttling like crazy and it won't go over 70C. I feel like there's some sort of cap over how hot my GPU can get before throttling. Is there any way I can modify this? or might I be having another problem. I think 70C is kinda low (am I right?) I'd like it to go up to 80C cause it seems to struggle to get to it's stock clock spees without reaching 70C (I admit that I am missing a rear fan). The point is i think it can handle more than 70C and it just doesn't seem to want to go past that. BTW I'm running the Gigabyte Windforce SOC version with 4gb of VRAM.

Im sorry, it there a specific reason you want your card to reach 80c? I mean, we typically tend to like lower temps in cards. is there something specific you are trying to achieve?

Here I'll get you some gasoline and we can fix that for you.

No, I don't want my GPu to reach 80C, I want it to reach it's clock speed, Which is supposed to be 1000Mhz, yet in the AMD catalyst control center it won't go over 900 Mhz

I dont know of anything in Crimson that would cause that. have you tried MSI afterburner?

My 970s won't break 80C unless I increase the power limit and core voltage in msi afterburner, once I turn them up they are fine running at 90C+ if the application can demand it. If I leave it at stock they just throttle clock speeds.

I don't know if it is the same for amd gpus but that has been my experience.

yeah, I would crank up your voltage to +20 and slowly slide up your base clock in crimson.

I've turned the power usage to 20, I haven't touched the voltage control.

Power limit, not voltage. Increasing voltage increases temp and would yield the opposite results if the card is throttling due to thermals.

So you're saying I should not touch the voltage control?

that is actually what I meant, had a brain fart from pain medication. my apologies.

I think it might have been Crimson conflicting with afterburner actually, now that i shut down crimson it stopped throttling..

That can happen, update Afterburner to the newest version if you haven't. If it continues to do it try something like ASUS GPUTweak. Does a lot of the same things. 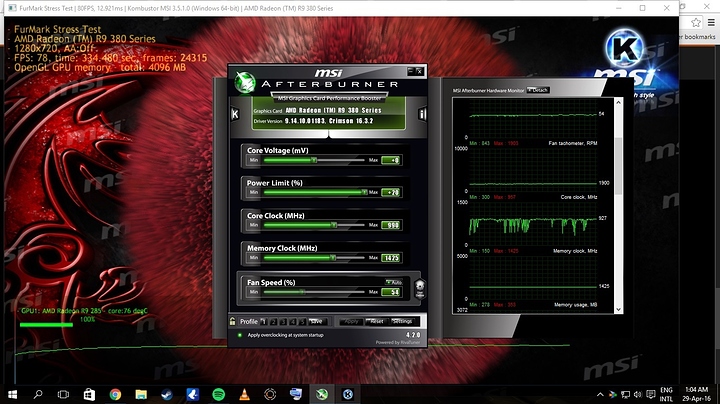 My clock speed is still unstable though, is this normal?

And when I do the stress test it actually seems to keep stable until I reach around 70C and then it starts going haywire.

No not really, looks a lot less like anything thermal. Does it do it in games?

Furmark is pretty shite at testing GPUs anymore. Does more harm than anything. 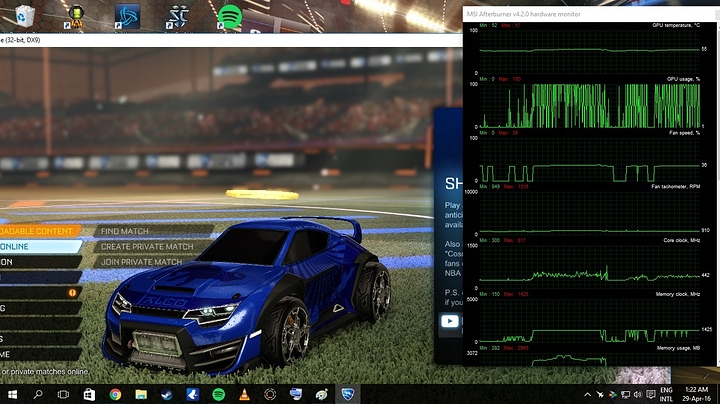 oh yeah, it's not doing very well at all..