PSA: I would stop looking at computer monitors for best performance and look at TVs

Is it strange I’ve never heard of necrosis problem with IPS panels? Perhaps it goes by another name? Searching on “ips necrosis” gives you nothing but medical results…

Can’t help but wonder if this was invented to make OLED look better?

Necrosis is my own word. I guess “clouding” is the common term.

Also for more burn in info for others, here is a more indepth burn in test: https://www.rtings.com/tv/learn/real-life-oled-burn-in-test

Yep I was as skeptical as you, but this is where my research has led me.

However manufacturers taking advantage of pc gamers insn’t anything new. There is a lot of ignorance that they take advantage of. Case and point: The audio industry aimed at PC gamers is a joke. Nothing but cheap junk in the form of 'gaming headsets" and the like.

IPS glow is a thing, that is well documented and a common fault of many IPS panels.

However manufacturers taking advantage of pc gamers insn’t anything new. There is a lot of ignorance that they take advantage of. Case and point: The audio industry aimed at PC gamers is a joke. Nothing but cheap junk in the form of 'gaming headsets" and the like.

I’ve not seen a television set (old people speak) look better than a computer monitor. Benchmarks and tech talk are great, but visually I don’t see it. I’m guessing many others don’t see it either.

Yes I am waiting for the other shoe to drop too. I am also an old guy who used the family Commodore 64 monitor as a TV because it was just better for years and years.

The good news is though that anyone can walk into BestBuy, and plunk their but down in front of these TVs and see for themselves. Harder to do with monitors lol

TVs are much higher input lag across the board. Response time isnt the same. Panels arent as capable. Even the lowest input lag TV according to rtings is still twice that of an AVERAGE PC display.

The only thing that comes close is nvidia’s BFGD. 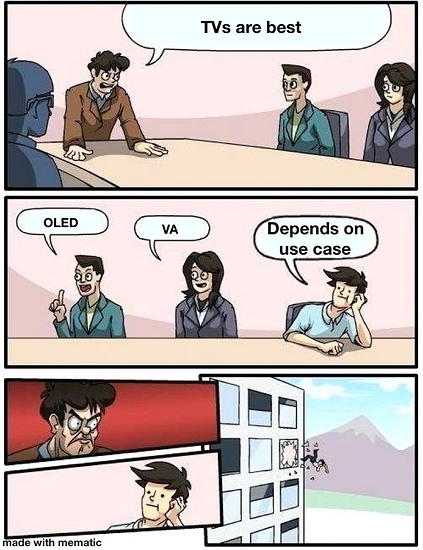 lol ok. I was just confused as necrosis brought about a whole other image to my mind.

AOC nex to it is better and half the price

I almost bought an AOC recently but unfortunately it’s HDMI input didn’t run on it’s maximum refresh and I planned on using HDMI audio for my vfio setup. Granted it was a pretty old model and I was lured by the price. I’m sure there are newer ones without that defect.

Really? The one in my living room gets used maybe 4 times a year.

Seeing other reviews and benchmark measurements, this TV has BETTER responsiveness as far as input lag than a good majority of gaming monitors. Being OLED with quick pixel responsiveness also helps in this category.

I used this TV as comparison because OLED is supposed to be the most expensive, yet seems to destroy the $2000 flagship monitors in every way for the same price.

TVs are pretty cool. The better ones are the advertising display ones. Like the ones at your fav fast food restaurant or the ones you see on the news stations at malls etc. They got great picture ratings and such. Bloody expensive tho. But they’ll last ya.

Personally I’d wait to purchase a monitor, especially one that costs more then 1k since microled is coming… although I don’t know how fast they can get it to become actually affordable for the general population.

Response time also don’t matter for a lot of people.

You’re sacrificing a lot more than a few ms for basically no gains other than size. 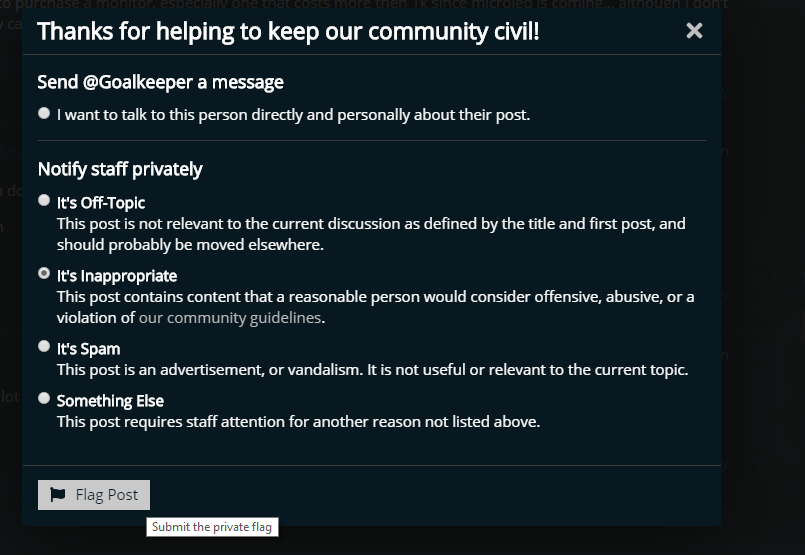 response time and input lag are different things. To the average person they dont matter. To someone who plays games, they might. low response time means ghosting.

Well once ghosting happens, it sucks if you spent a lot of money on it. Like the $5000 first entry of the Nvidia BFGs. The 65’ behemoth that Linus said had pretty noticeable ghosting.

I knew it was an unpopular opinion. Lol.

I don’t mind tho personally.