Hello, I have a dual socket Xeon Gold 6152 server with PROXMOX 7.1-7 installed and the system refuses to recognize that I’ve enabled IOMMU groups for hardware pass-through.

The server persists in telling me I haven’t enabled it:

What’s strange is I’m having the same issue on the old hardware I’m looking to replace. A dual Xeon 2698v3 server. Running PROXMOX 7.1-4

What confuses me even more is I have an AMD EPYC 7601 server running 7.1-4 and it’s passing hardware devices through with no problems at all.

And I can’t figure out where the disconnect is for the life of me. The only differentiating factor I see is that AMD EPYC is supposed to have IOMMU enabled by default but you have to enable it for Intel Xeon.

So what’s missing? Any help would be appreciated.

did you add intel_iommu=on to /etc/kernel/cmdline before running that command?

Right now the new hardware is basically a test server so I could try the systemd method and see if it takes me anywhere. As I understand it you use one or the other not both.

I’ve only used 7.1 and that’s what works for me. but i suppose it depends on how it’s installed

I just went along with however PROXMOX wanted to install the OS with a ZFS mirror. I didn’t customize anything else like specifying a bootloader. Figured it’d be GRUB by default.

Does this look correct to you? I’ll give it a try:

i have it as a single line, not sure if that matters, but yeah

It did not work unfortunately. I tried it with both GRUB & Systemd together and I tried Systemd by itself. PROXMOX is still complaining that IOMMU isn’t detected.

You’ve enabled IOMMU in the BIOS?

To my understanding yes. 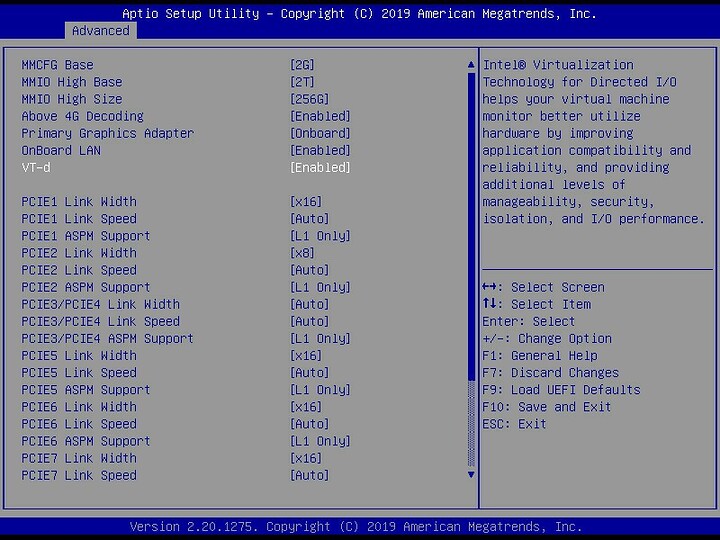 VT-d is different to IOMMU

This is how they’re addressed under their respective platforms. I’ve not seen IOMMU in an Intel board BIOS. Have seen it in AMD though and have used it for hardware pass-through.

To add to some of the confusion. The other Xeon server where IOMMU groups aren’t working. They were working prior to upgrading the OS and BIOS. Afterwords it stopped and the same BIOS settings that worked before now don’t.

You ran update-grub after changing the GRUB variable? If you check the command line option when it boots, do you see the iommu in the line?

Edit 2: presumably if we’re seeing IOMMU devices its enabled. Do you need vfio installed for Proxmox to detect IOMMU maybe? What is cat /etc/modules ? It should be:

I don’t know how to check the CLI at boot though.

I haven’t setup the vfio modules yet. Planned on just blacklisting the drivers but we can try it.

Added the drivers to /etc/modules. Ran initramfs -u -k all. Rebooted. No difference.

If I try to add a hardware device to a VM despite the error banner it just throws another error in my face that IOMMU isn’t present.

@Dexter_Kane @COGlory It looks like the problem has been solved and Dexter_Kane was on the right track.

PROXMOX did not like that intel_iommu was on a different line but appending it to the end of the fist line everything started working exactly how it should.

I don’t know when the transition occurred or what caused it but for both of my Intel servers what used to do the job (editing /etc/default/grub) no longer does it. It is now /etc/kernel/cmdline.

I’ll be doing some pass-through testing to really make sure that it’s working but otherwise things are looking good now.