Sustained load is much lower and a 500W PSU will be just fine is 9/10 configurations with just a Single GPU if you don’t go HAM on the components.

Please share the PCPP link so we can see what components you are thinking about using because it is a moving target.

I usually over estimate a bit, probably on that order.
Also, I try to plan around what I might add later, which is usually a fair bit; most pcie slots/lanes, ram channels etc.

If you over estimate for safety, perhaps look at the 80 plus “bronze” Platinum or Gold.
Not a lot of difference, jut means it’s less wasteful when at lower usage.

Like, if you made a low power system that ramps up occasionally, like a HTPC that occasionally games or something.

But I presume you already thought of these anyway.

is the site calculating for load, or not

IIRC they calculate using the max estimated load or the rated TDP of a product. Which in theory should be pretty close to what you’d pull from the wall at 100% load on everything.

Depends on the model. One of the 80+ Gold or higher units, more than likely yes.

I had a feeling it might be all inclusive estimate, but googling produced a lot of talk of “safety estimates” being 1.5x a product’s TDP, and also the “efficiency” jargon of 50% of a psu’s load being ideal, which would mean spending over 200 gbp on a 1000W IF I could find one right now.

You’re not going to be pulling a sustained 500W unless you have a high-end HEDT CPU with a multi-GPU configuration.

Take a look at this, it is a better calculator then PCPP-
It also sizes UPSs 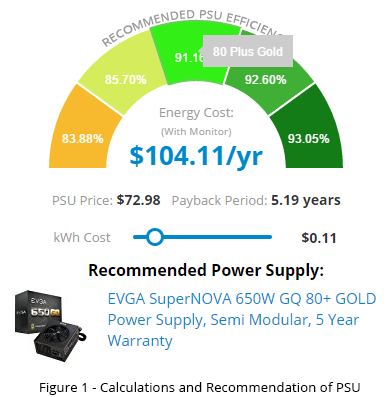 Power Supply Calculator - Select computer parts and our online PSU calculator will calculate the required power supply wattage and amperage for your PC.

750W is more then fine for that setup.

The peak efficiency is way overblown. We’re talking a 3% difference in efficiency between 20/100% load and 50% load for an 80+ Gold power supply. For servers or render farms I can totally understand the reasoning, but for anybody else I don’t believe the cost is worth it.

And I just take the guesstimated system consumption and add 100W to 200W to it and grab a power supply in that range. That way it should have enough for new hard drives or fans or even overclocking.

Also i would like to mention that the Msi MPG Z490 Gaming Plus,
motherboard is a pile of trash.
At least as far as the vrm is concerned.

Thanks for the help guys.
You can go ahead and close.