I don't know where the old one went. It's lost now, i guess. I enjoyed that thread, though. So I'm just making a new one. (Can mods sticky this so it doesn't get lost?)

Here's mine. The desk is custom built (by me) and normally I'm running three monitors, but I'm yet to buy an active displayport adapter for the third. The mac is for school only (provided by my cyber school).

When I get my laptop and third monitor up and running I'll be reposting. 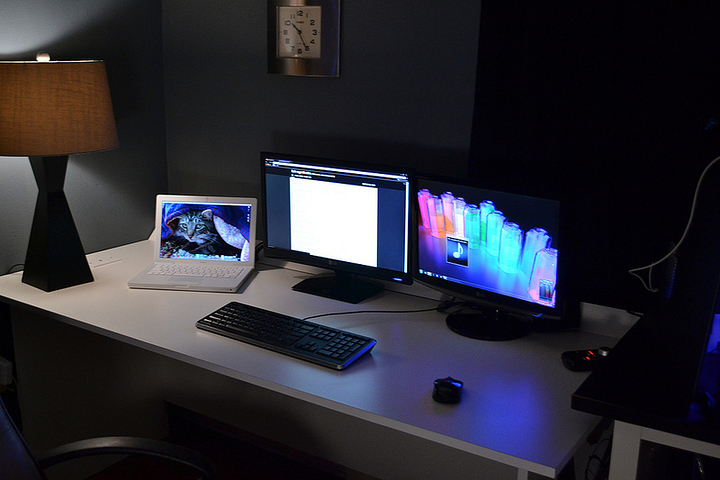 Heres the link to the original thread; Nice, clean setup you have there btw.

Eh, we'll just see if people post in this one. I could never find the other one and it's dead now anyway.

And thanks. It has blue LED lighting, but I don't really plug it in much. I don't know why.

If you look closely, you'll see a little plate next to the lamp. That's an ethernet port that I built in to the desk.

I love your room, Toast. I like the blue walls. The white desk goes nice with everything and that lamp is badass. Computer setup is nice too as nothing is on the desk really.

I will buy a desk from you.

Awesome setup Toast! I really like the clean, minimalistic and elegant look.

I used to have a strip of LED lights between the wall and the desk, but I had to move them to the other corner of the room.

What it looks like, for now. Yes, it's awful.

The reason I use the monitor is this 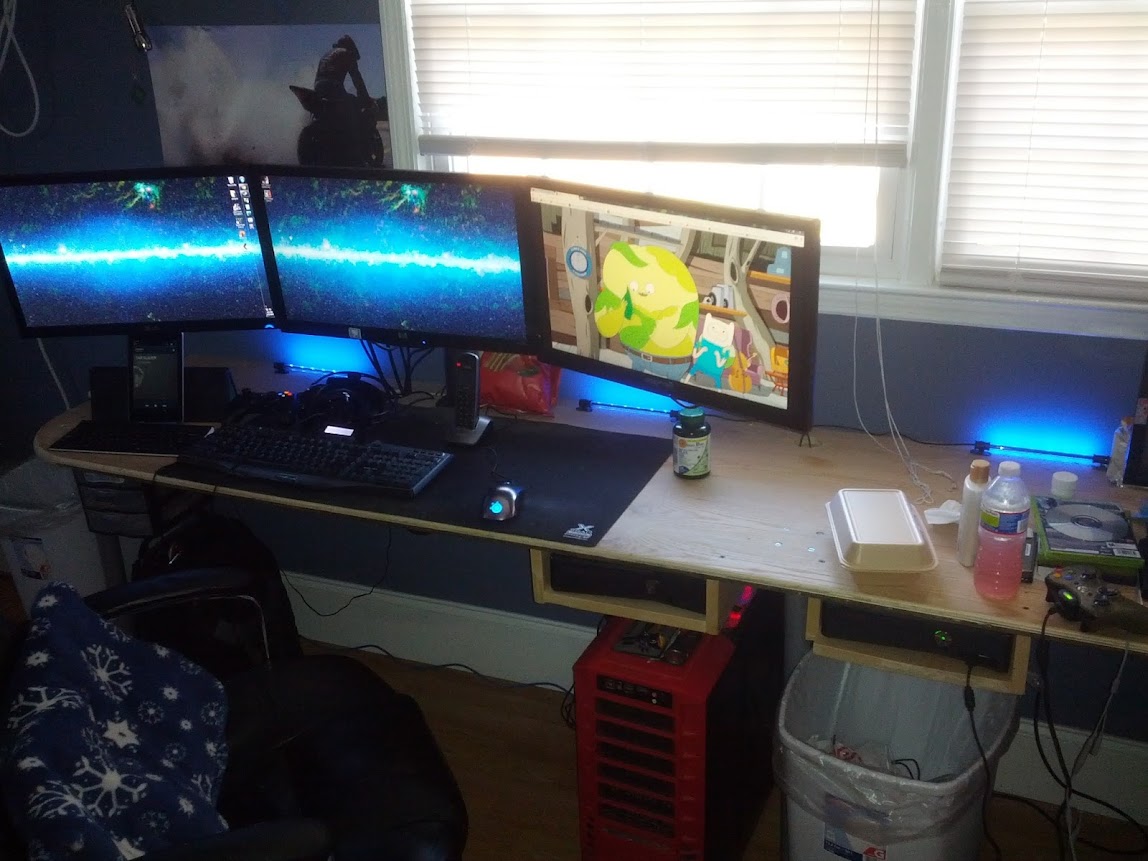 Thanks for the compliments everyone ;) And the desk is very big! Haha. It's big enough to fit 3 22 inch monitors with ease. There's also a hidden compartment underneath the bracket that stores all of my wires, so cable management is basically perfect.

Ive been so busy that my room got really messy so once I clean it I'll post pictures of the rest of my room too.

And GoDM1N you should give us a night shot with the LED's on ;)

I agree completely Toast. I am jealous of your room. :) How long did it take you to make?

https://www.laptopscreen.com/ look up your laptop there see if its worth fixing.

Assuming you're talking about mine, a week end. I started painting friday night, put the flooring in saturday then built the desk sunday. The desk was easy though, and didn't take much time.

I meant Toast. I like his setup better actually. Yours is pretty cool though GoDm1N.

GoDm1n bit of a shame you used laminate flooring. I know its cheap and durable but a click board or a Karndean would've looked so much nicer. I love the desk though!

Yeah, but anything more expensive than laminite is a BIG price jump, that's the problem.

And the desk took me a week to make, but that was because I could only work on it for a few hours at a time. I made the plans myself and cut/routed all the boards, so it took a long time.

I'll post some more detailed pictures in a bit.

It's so.....expensive. My rig is coming soon anyway, so I don't think it's worth it. Thanks anyway