Possible Uses for an Old PC

Not sure if this is the right place or even worth asking but here it goes.

Any possible uses for this thing? I was just planning on using it as a target but if anyone has any better suggestions I'd like to hear them.

Unless you hide that thing back in the basement when it's on, it will be the most annoying thing that has happened to you. Those things tend to get very loud.

I already have a PFSense box sadly. Plus this machine doesn't have enough Ethernet ports or internal expansion to add any.

I am planning on shooting it I think. it just really isn't useful. It is simply too old. It is surprisingly quiet though. HDD is louder than the fans.

Single core Penitum 4 is probably too slow. Only 1GB of RAM and it uses PATA/IDE.

It would probably make a pretty decent boat anchor.

I think you're right. The damn thing weighs in at 31lbs. I'm using it for a stool at the moment.

You could put Linux on it.

It'd still be slow and the motherboard can't boot from USB so I'd have to use CDs which are a pain in the ass and sometimes not even big enough.

You could also try to run a small game server.

Shoot it, or stuff it full of binary, then shoot it. There is literally nothing else.

Or you could try and get your hands on some arcane device that only has driver support for Win 98. Get a needle printer with continuous paper support and then print away (if you have a basement).

I had one under my pc desk for a while that i used as an ottoman to prop up my feet.

I wanna see it as an anchor imho lol 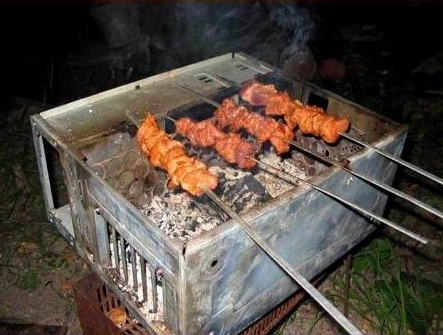